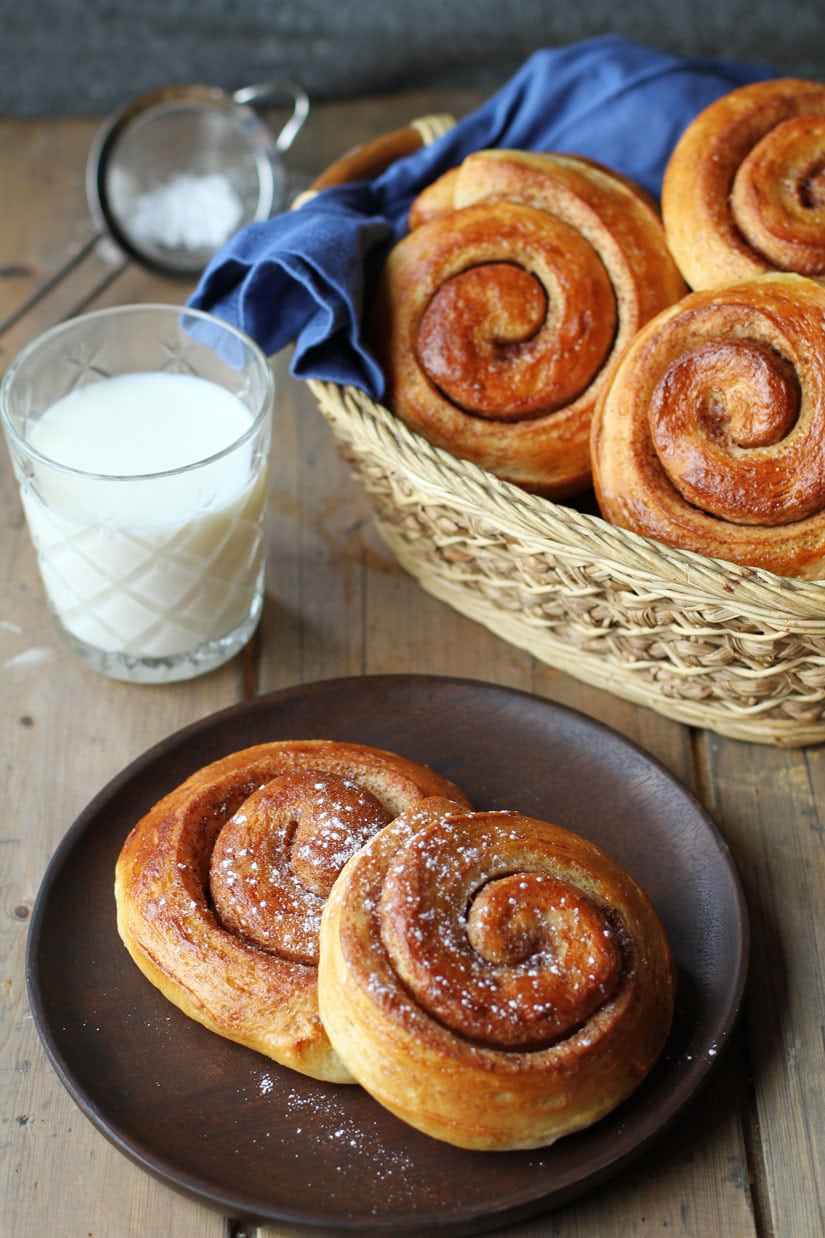 These are the best ever fluffy cinnamon rolls! Each bite has that cinnamon sugar filling and the bun itself is really fluffy, buttery and delicious. It's a classic bun recipe made into glorious cinnamon rolls.

It's hard to avoid being a narcissist when I have the perfect bun recipe up my sleeve. Known as the bun queen in my circles, I think you should listen to me now (I don't have to mention that my circle is very small, do I?). I'm always on top of the world when I see my cinnamon rolls rise, rise and rise. The smell in the kitchen becomes more and more satisfying as they bake.

The 12 minutes it takes to bake them may seem like an eternity. But it's also calming to just sit on the floor and watch the dough work its magic in the oven. Brew yourself a cup of tea and relax as the smell hits your core. 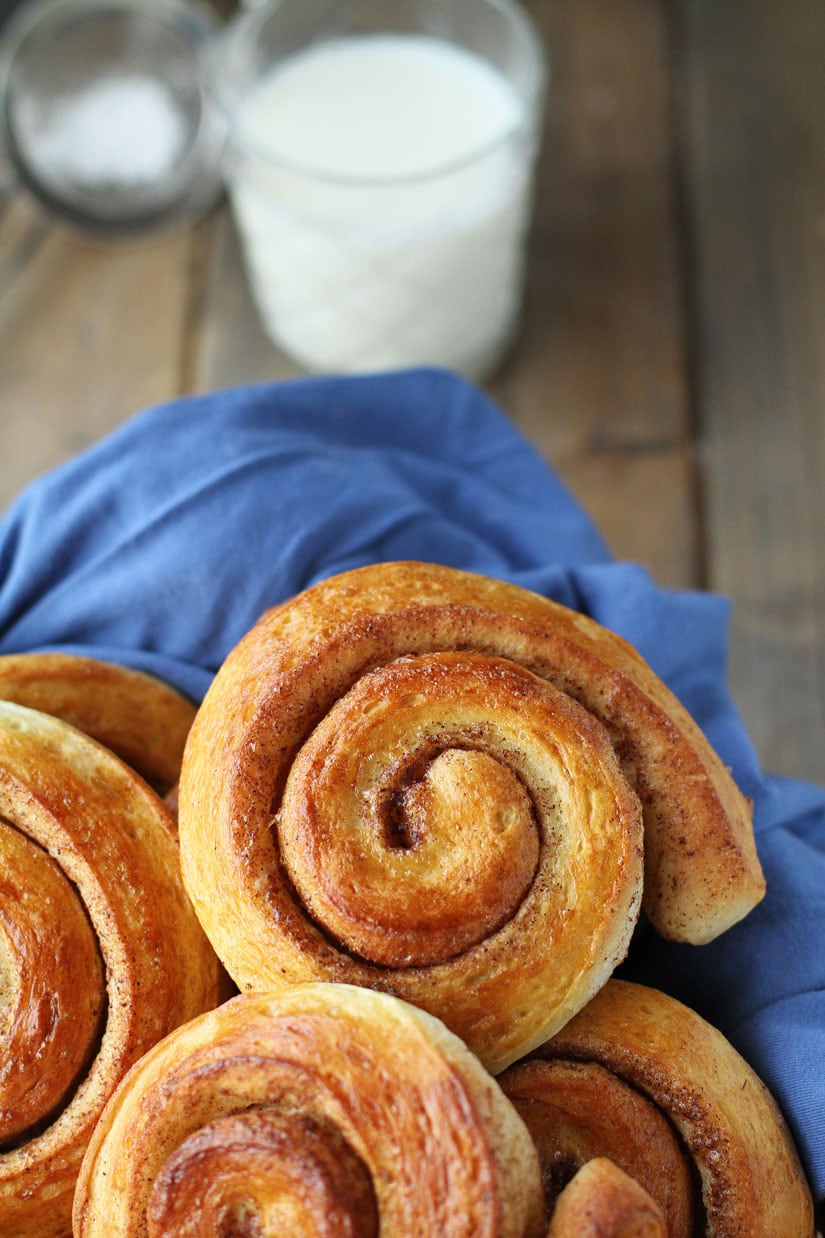 Cinnamon rolls are one of the pinnacles of comfort food to me. Just watching them is comforting. But eating them, ahh that's just amazing. The first bite, as soon as they're (almost) cool enough to handle, is just DIVINE. I close my eyes and dance in the kitchen, making humming and yummy noises. I might not expect everyone to appreciate a good bun as much as I do, but I believe that if you try this recipe, there's a fair chance you will do exactly the same as me.

The bun recipe is the same as in all buns I make. It' the secret to a good bun, you know. So why jeopardize it. You can find the original recipe for regular Norwegian Sweet Buns here. I urge you to try one with butter and cheese on it, either brown or Jarlsberg/Gouda/Edam. Also delicious with jams, homemade preferably.

However, you have clicked yourself into these deliciously easy fluffy cinnamon rolls. And I reckon you want the recipe? Alright. 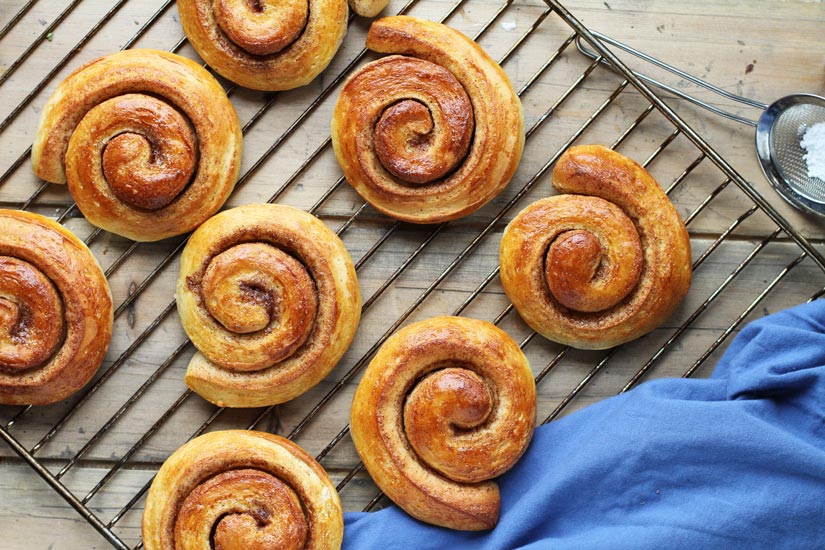 Mix the dry ingredients in a large bowl - flour, sugar, salt and cardamom. In a medium saucepan, melt butter, pour the milk in and wait until the mixture is lukewarm. This is very important or else the yeast wake. Mine was at 38C (100F). Mix the milk with crumbled up fresh yeast. If you can't find fresh yeast - you can use 7g dry (read more thoroughly about it here). Pour the butter and milk into the flour mixture along with one egg.

Knead together. Using a stand or hand mixer. This is also a very important step, as you have to mix until the dough is fluffy and no longer clings to the bowl. About 10 minutes. You don't want to add more flour that absolutely necessary, as more flour means denser buns - which you obviously don't want.

However, if you measure exactly like the recipe below, you shouldn't need to add or subtract anything, I never do. Add a little flour on top, and place a kitchen towel or plastic wrap over the bowl. Leave it in a warm place (or at least not ice cold and drafty!) for about 1-1,5 hours, until the dough has doubled in size.

Take half of the dough and place on a lightly floured surface. Knead a little and begin rolling with a rolling pin. I want it to be around 1 cm (0.4 inch) thick. Spread half of the cinnamon mixture onto the dough, and begin to roll.

Do not roll too tightly. Just lightly roll, but then again, not so loose that everything falls apart. Cut the roll into 10-ish rolls. Place them on a baking tray lined with parchment paper. Whisk one egg and brush each cinnamon roll. You may substitute with milk, but I prefer eggs.

Take the other half and repeat the process. Bake in the middle of the oven at 210C (410C) for around 12 minutes. Cool on a cooling rack. 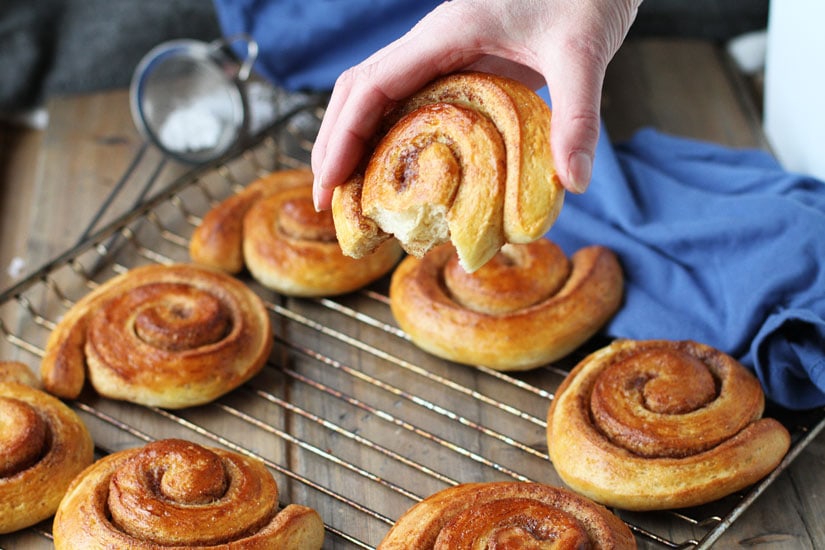 I'd love to hear your thoughts.

Do you call them cinnamon rolls or cinnamon buns?

Other buns and breads:

Tell me, either in the comment section below or tag me @thegingerwithspice on Instagram. And don't forget to Pin it for later! 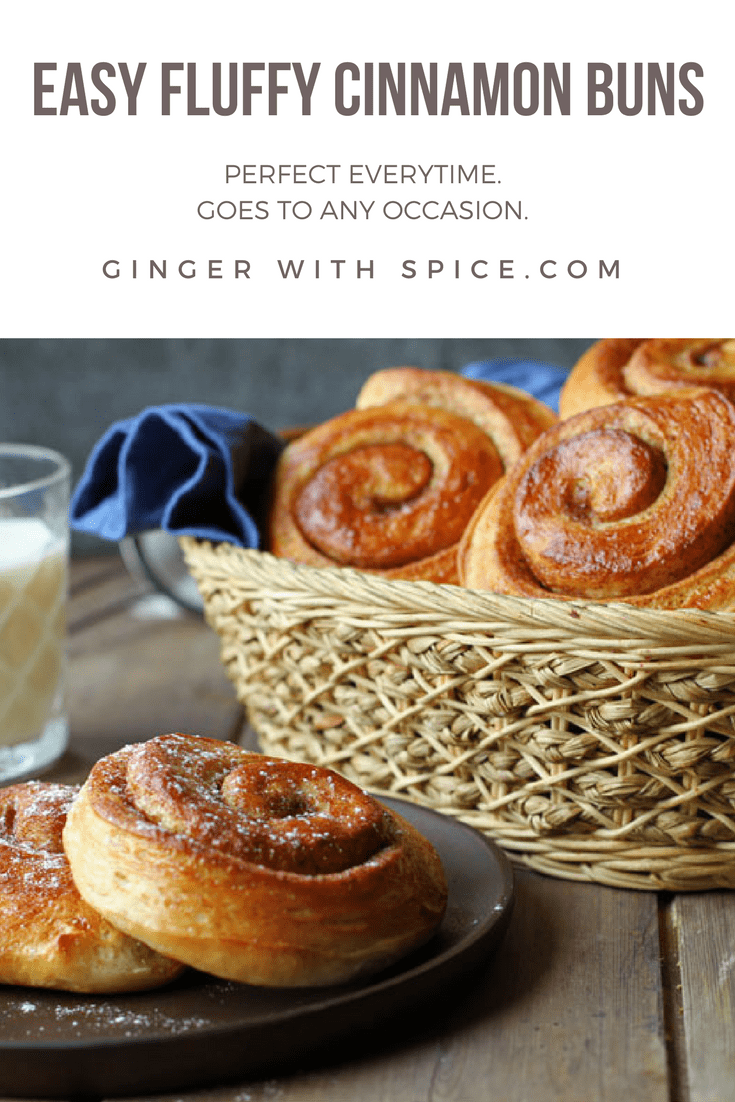 * If using dry yeast, use instant dry yeast and combine with the dry ingredients.

Oh wow these cinnamon rolls look amazing! what a great homemade recipe you have come up with, that is so easy to make! I will surely be sitting down starring at the oven as these rise while they bake!!! lol....thanks for the recipe :)

Thank you so much! The rising is so satisfying to watch, haha :) 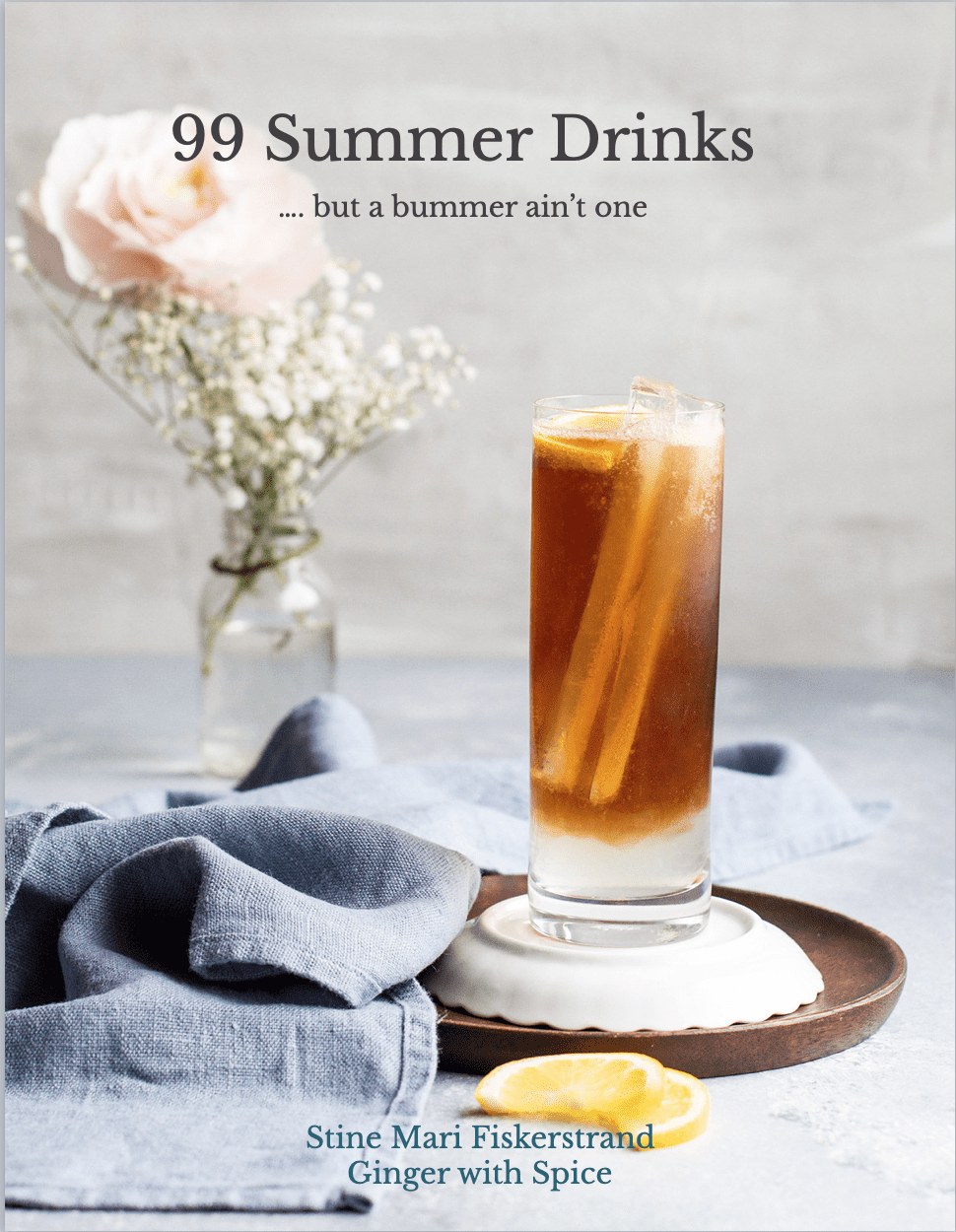 Click to Ginger with Spice shop to get your copy now!

There's more - sign up  to get my other e-cookbook 'Travels Through the Seasons' and weekly updates of new recipes. This one's completely free too!

Add contact at gingerwithspice dot com to your address book to make sure you receive it! You may unsubscribe at any time.

My name is Stine Mari and I am the ginger with a touch of spice, and I love ginger and spicy food.

I also love to make things from scratch, so here you will find from-scratch-recipes with extra spice and flavor. Click here to read more about me.