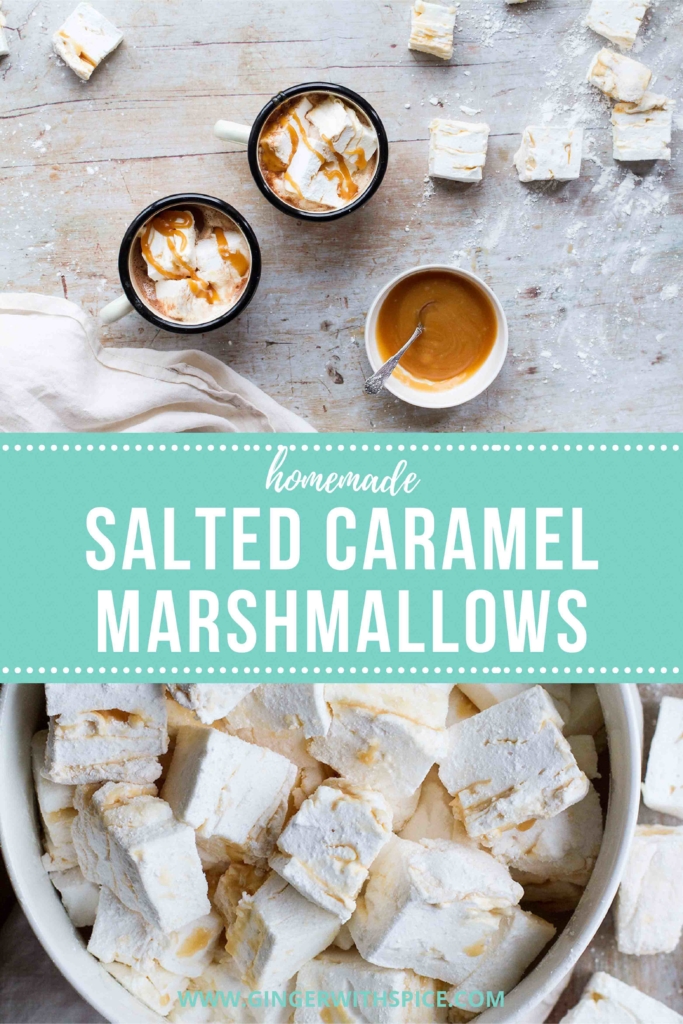 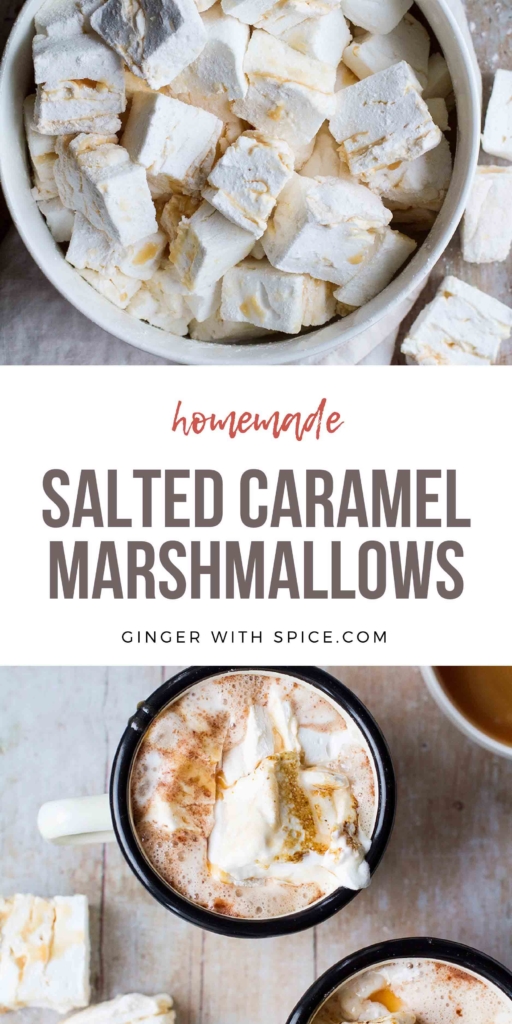 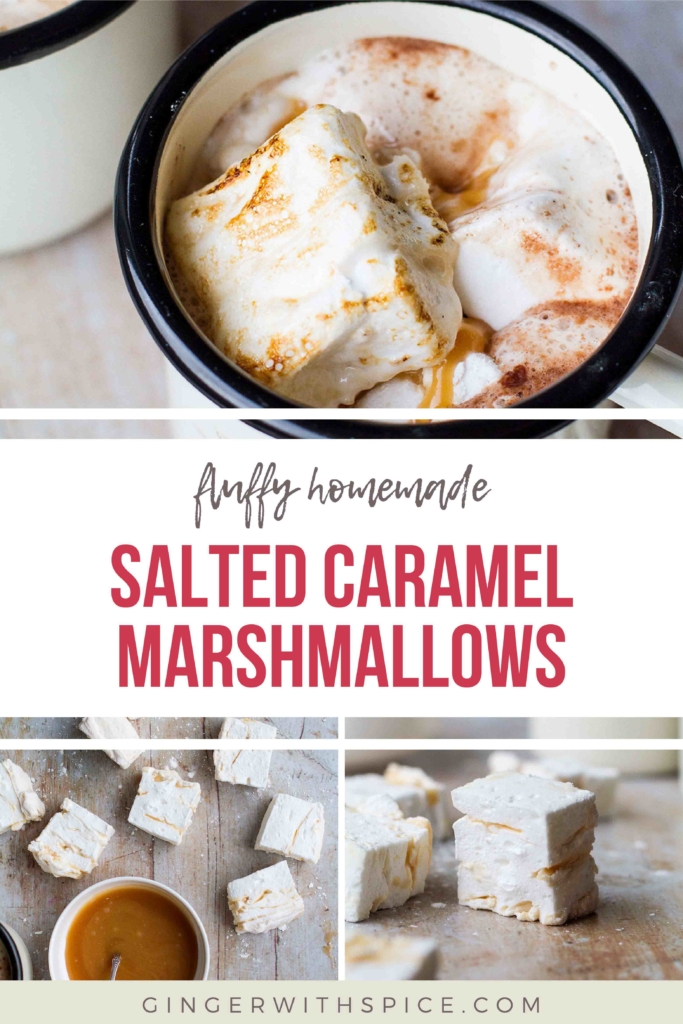 Imagine soft and fluffy homemade marshmallows with ripples of salted caramels inside as lovely salty surprises. Marshmallows are quite easy to make from scratch, and it is much more rewarding than any store-bought kind! This salted caramel marshmallows recipe requires just a few ingredients and the flavor and texture are unbeatable. 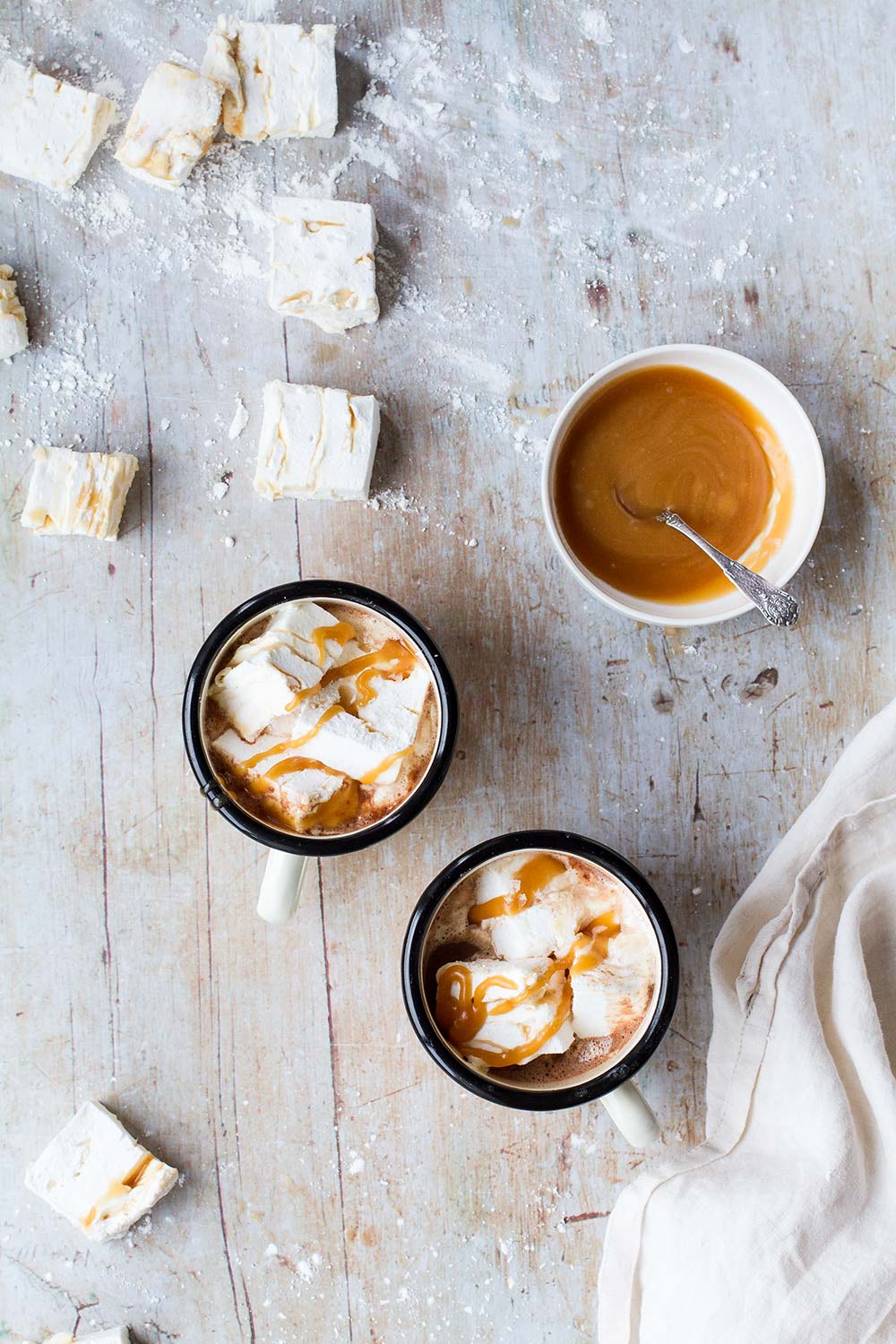 What to do with marshmallows

Right, you have made a huge batch of marshmallows and you're wondering if you can ever eat them all? The answer is yes. Homemade marshmallows are so much better than store-bought you could easily just eat them on their own. However, there are many different things to do with marshmallows:

You can always use store bought marshmallows, but once you start the homemade marshmallow train, you won't go back. Promise! 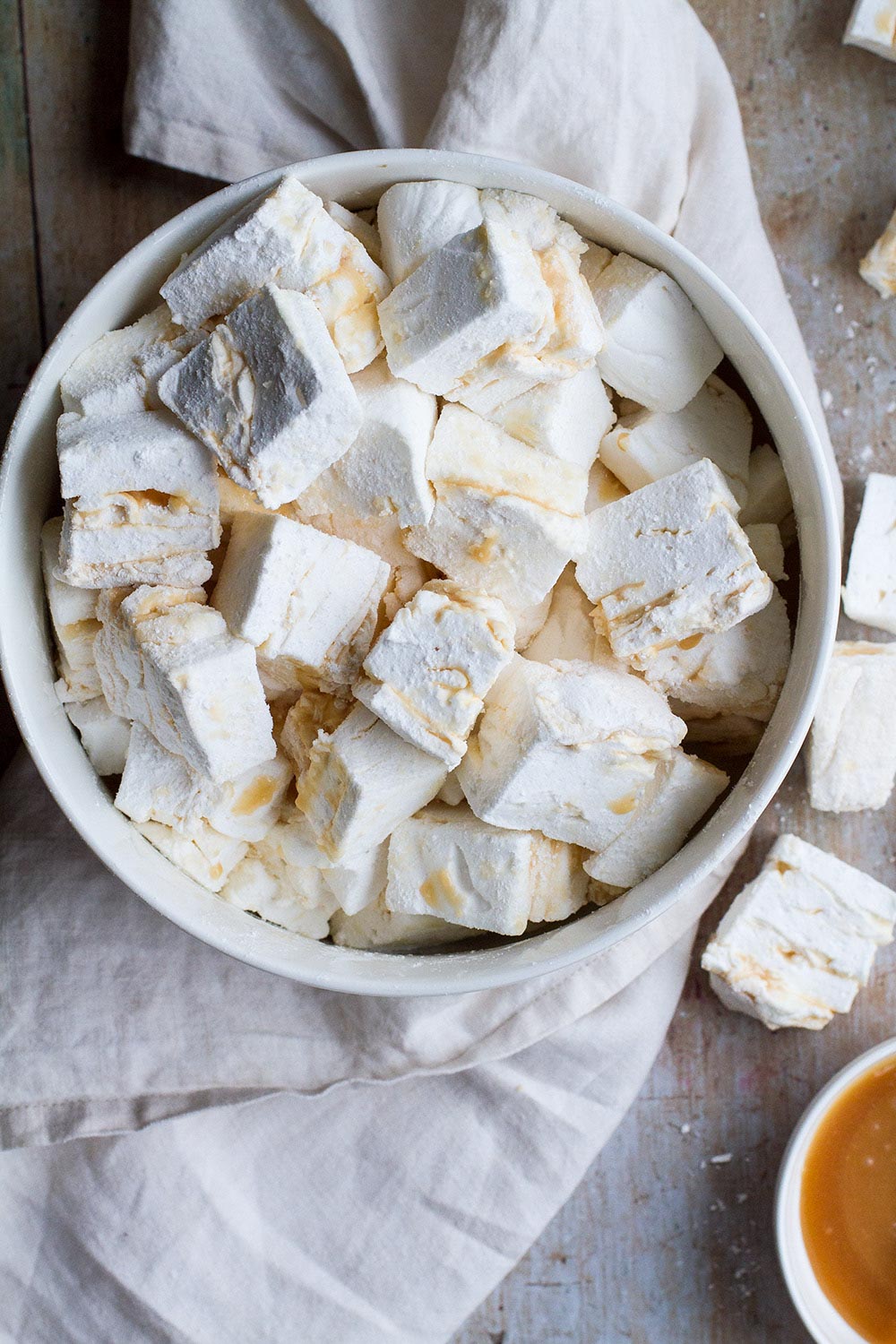 How to toast homemade marshmallows

Homemade marshmallows don't always have the same properties like store bought. First off, yes they will get that super yummy crispy exterior and melting insides.

BUT, they melt super duper fast. I would actually prefer to use a kitchen torch to toast them, because that goes really fast. You get a lot of heat in a short amount of time, so the insides don't have time to melt yet. And yes, they need to be eaten straight away as they continue to melt due to the hot exterior. 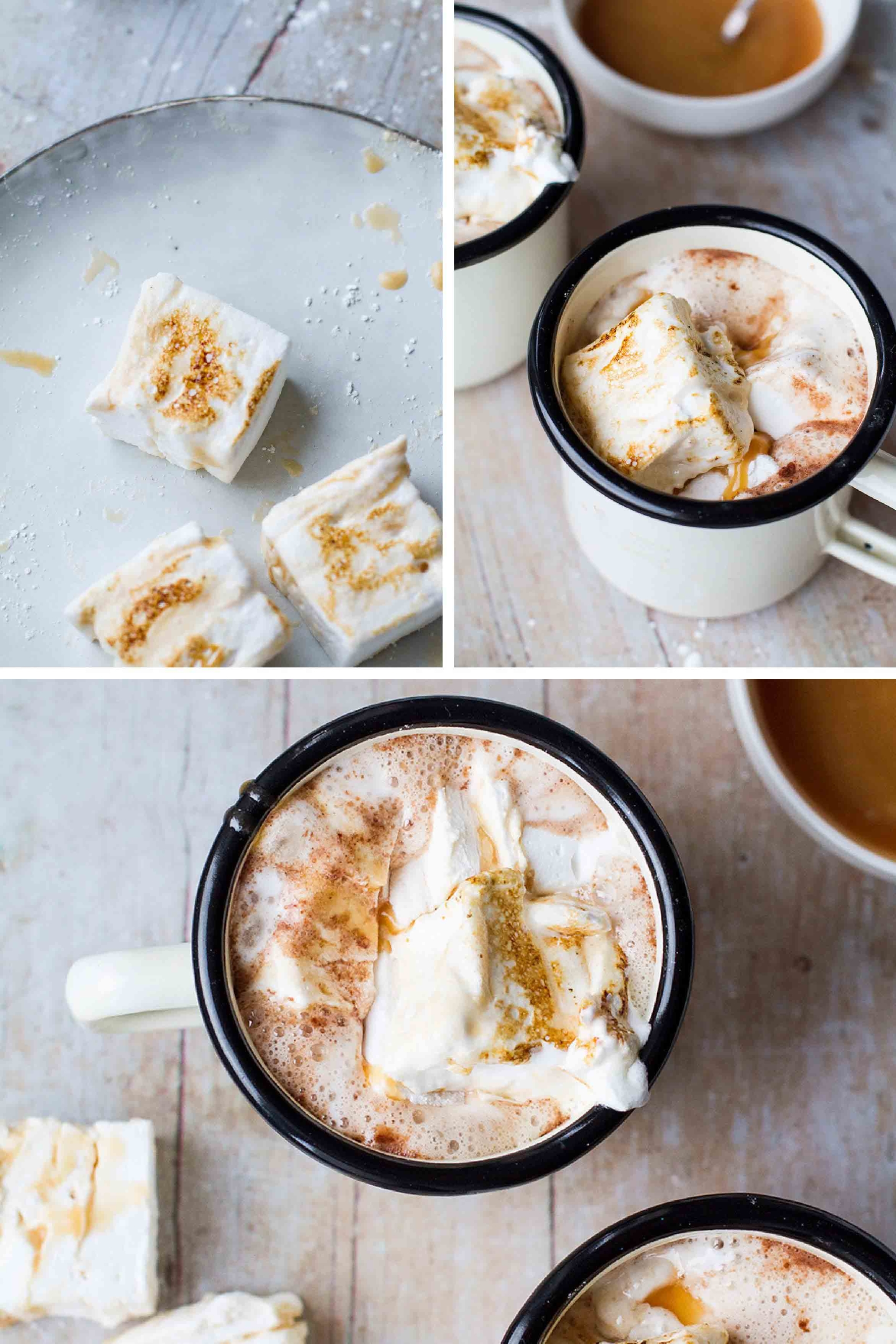 A thing that can help, is to actually not use freshly made marshmallows for toasting, but rather let them dry out for a couple of days before toasting. In these photos, they were freshly made though (using a kitchen torch) so it is still possible.

The thing with gelatine is that it will lose some of its setting properties at high temperatures and that is why they melt so darn quickly. I realized this one time when I was making a s'mores cheesecake with homemade marshmallows on top. When I baked it, it looked really good, but when I took it out, I realized all the gelatine had melted into the cake. Yes, that was not a good cake...

So if you want to use marshmallows for things like a cheesecake or other things that need heating for a longer time, I recommend going for marshmallow fluff instead! 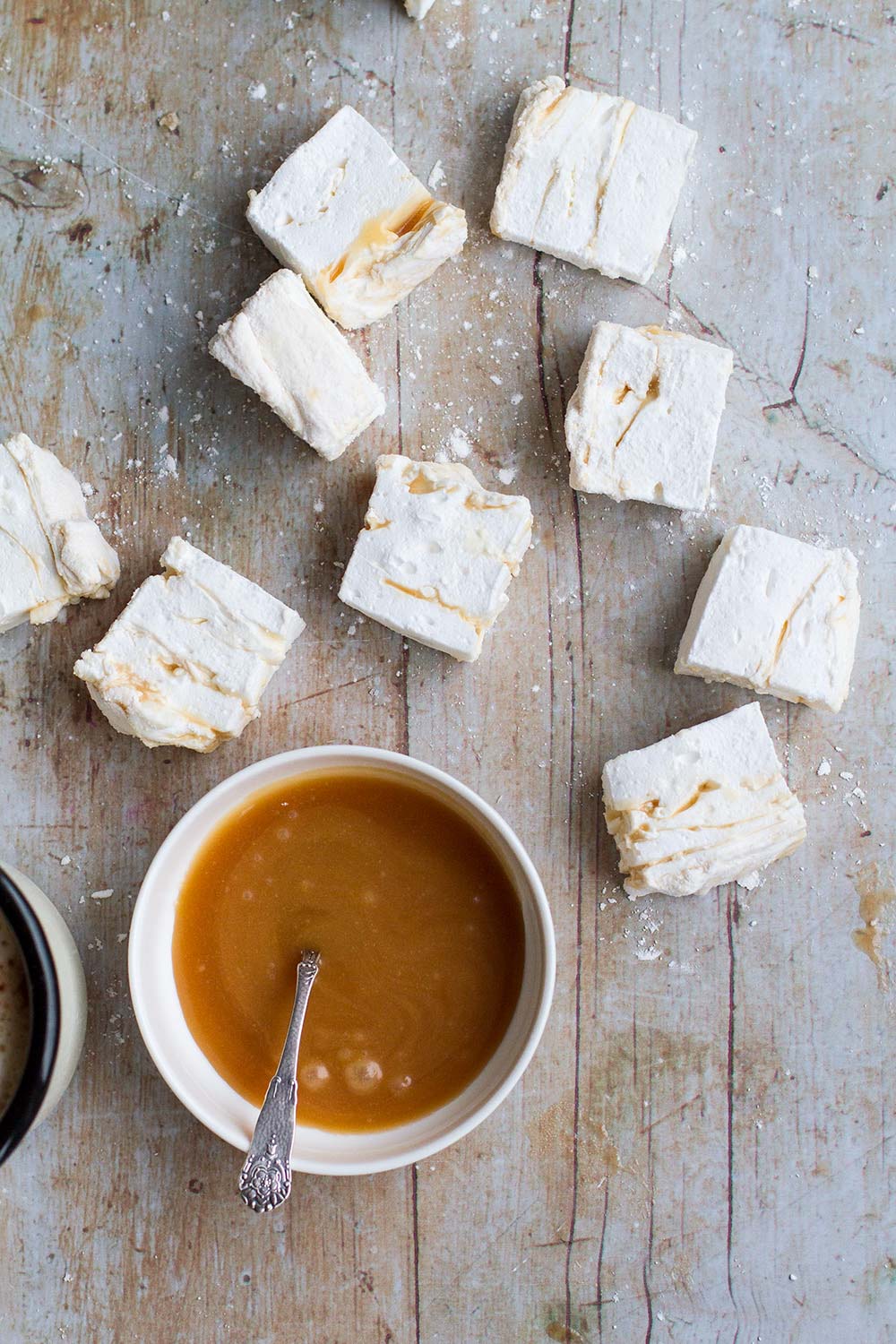 I didn't realize how important the temperature actually was until I messed up. Or rather, my candy thermometer decided to retire midway during cooking the sugar syrup. It is not like you will get gross marshmallows or anything, but they will not end up with the right texture.

I highly, highly, recommend using a candy thermometer for this recipe. Then it's almost impossible to ruin them and they will get fabulously fluffy.

In these photos you can see the batch with no candy thermometer to your right, it is a lot denser and chewier, whereas the batch with a candy thermometer to your left, which are super fluffy and therefore yields a lot to pressure. Both were tasty, but only one was mega delicious, you know. And yes, both were approximately the same percentage of the 'batter', it just didn't fluff up as much. 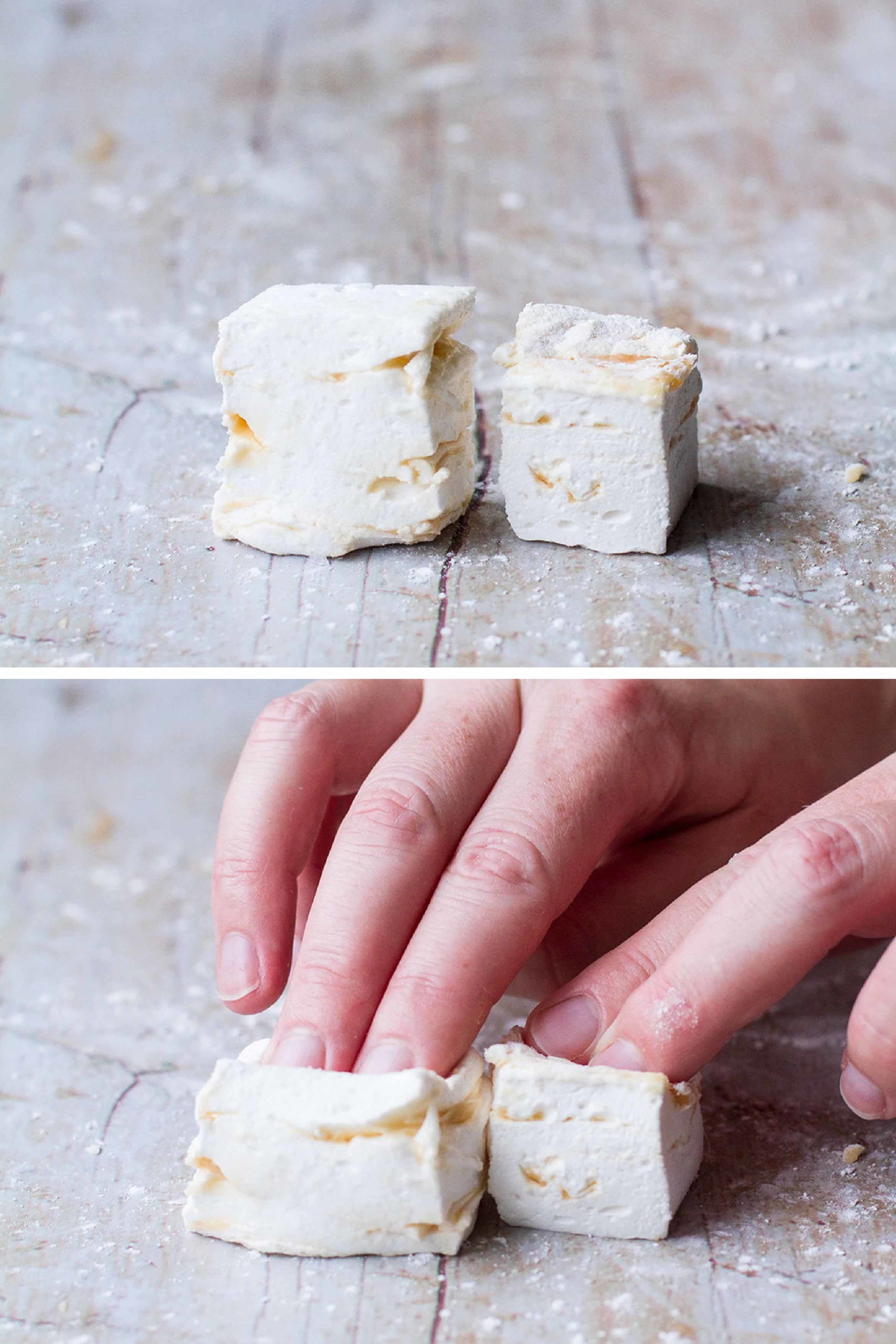 It is usually used as a way to avoid crystallization when it comes to boiling sugar. However, it is not sweet enough on its own so it is usually combined with other sugars as well. Exactly as in this recipe, it calls for granulated sugar and glucose syrup in the marshmallows and then coated in powdered sugar as well. Yes, give us alll the sugars. 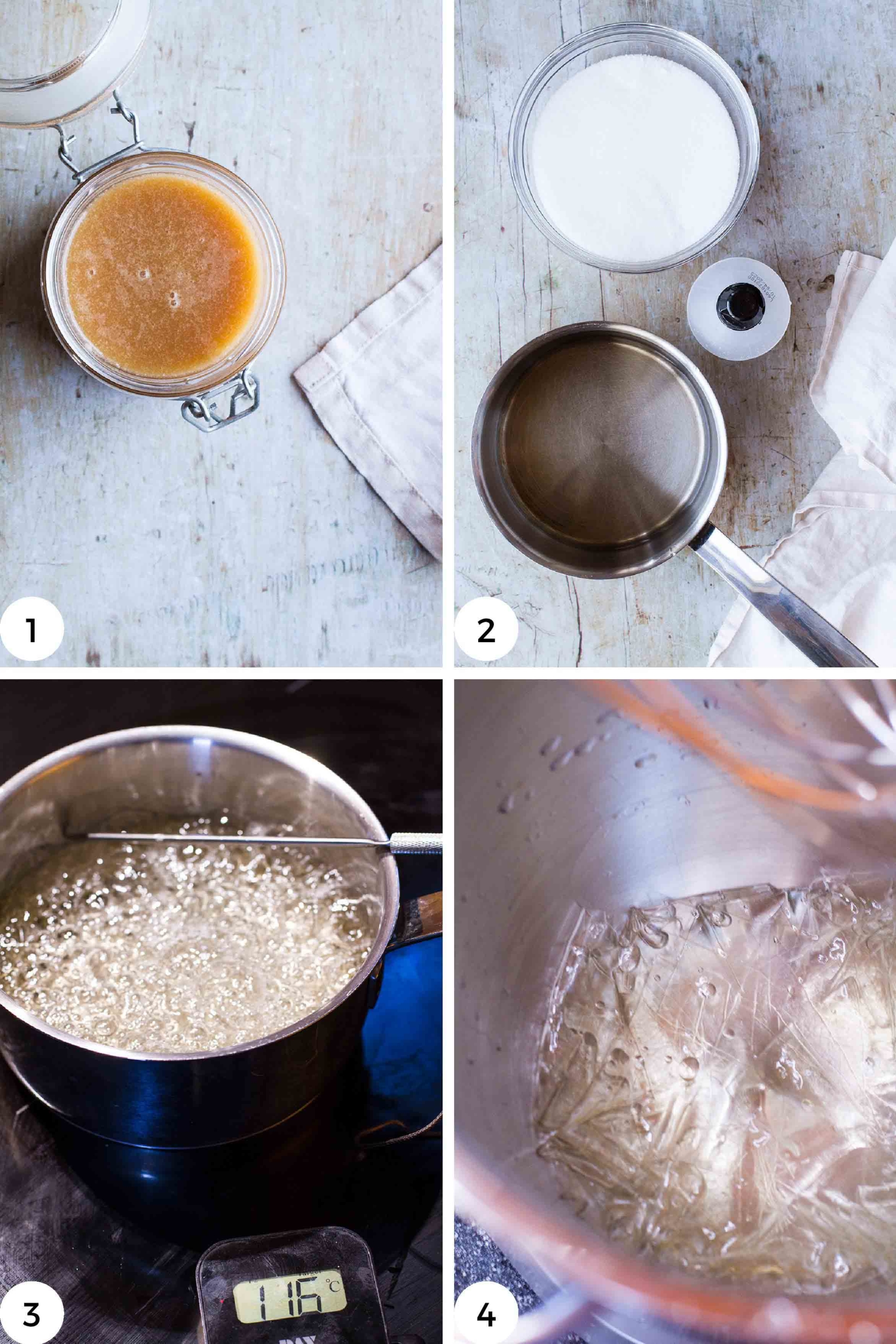 Why coating marshmallows in cornstarch

You don't have to coat marshmallows in cornstarch, you can use potato flour as well, or even shredded coconut. The point is to cover the sticky sides of the marshmallows with something not sticky, so you can place all your marshmallows in one box without having to cut out a piece.

That being said, you may need to supplement your box of marshmallows with a new batch of powdered sugar + cornstarch after a while. It will depend on the weather actually. If it's cold and dry, you will not have to do this and I don't have to add a single gram more of it when I make peppermint marshmallows in the winter. 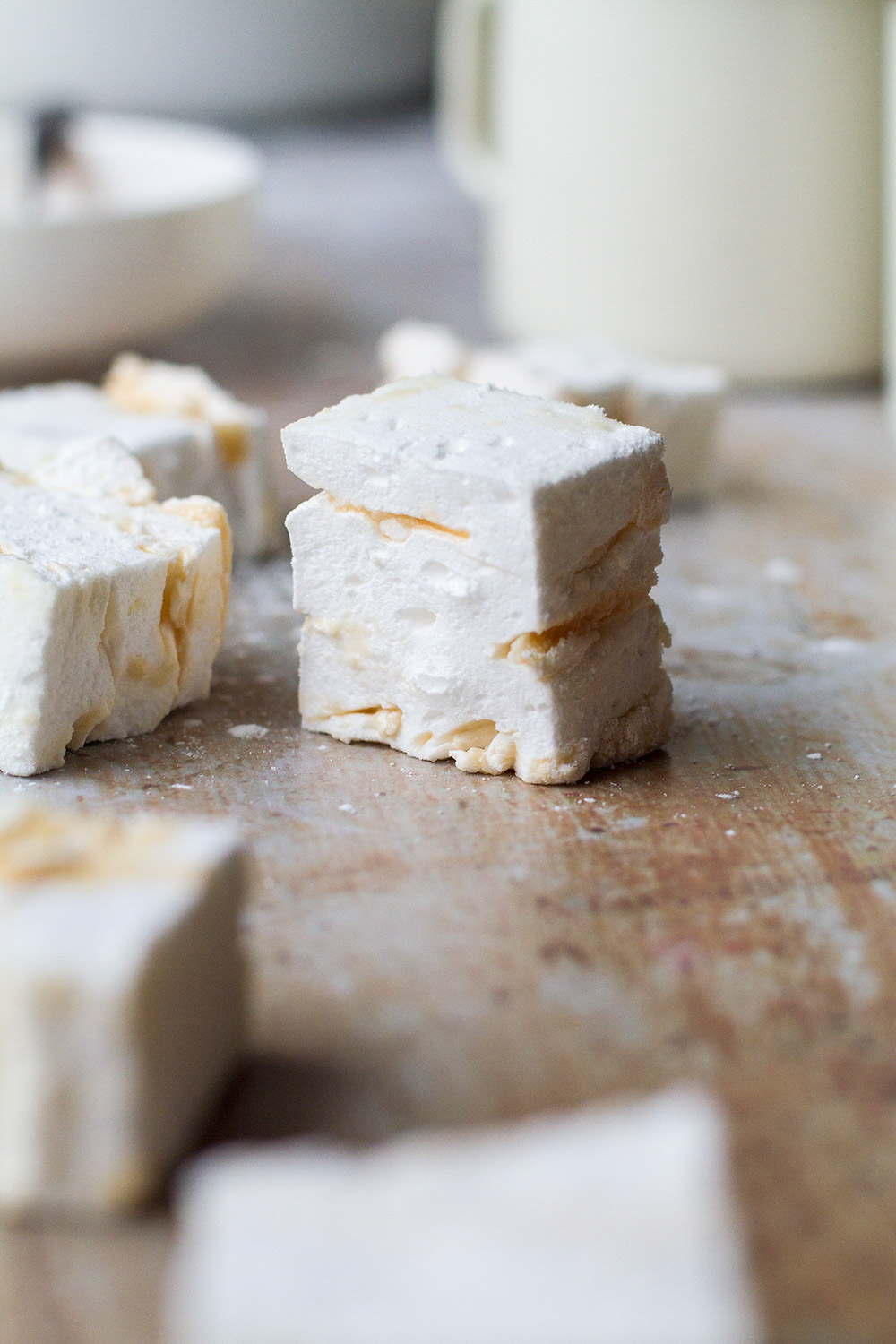 Add foil to a large baking dish, minimum 13 x 9 in (33 x 23 cm) and then spray generously with cooking spray or oil to make sure all places are covered. Yes, I say this because I have not always done it, and it is a hot mess getting the marshmallows out of the foil after.

Add gelatine sheets to cold water and let it sit for 5 minutes while you continue with the rest. In a small saucepan, combine ½ cup water with glucose syrup, sugar and salt. Be careful when you add in the sugar as to not get sugar on the sides of the pan (to prevent crystallization). Give it a careful stir and put the heat on medium. Then stop stirring! 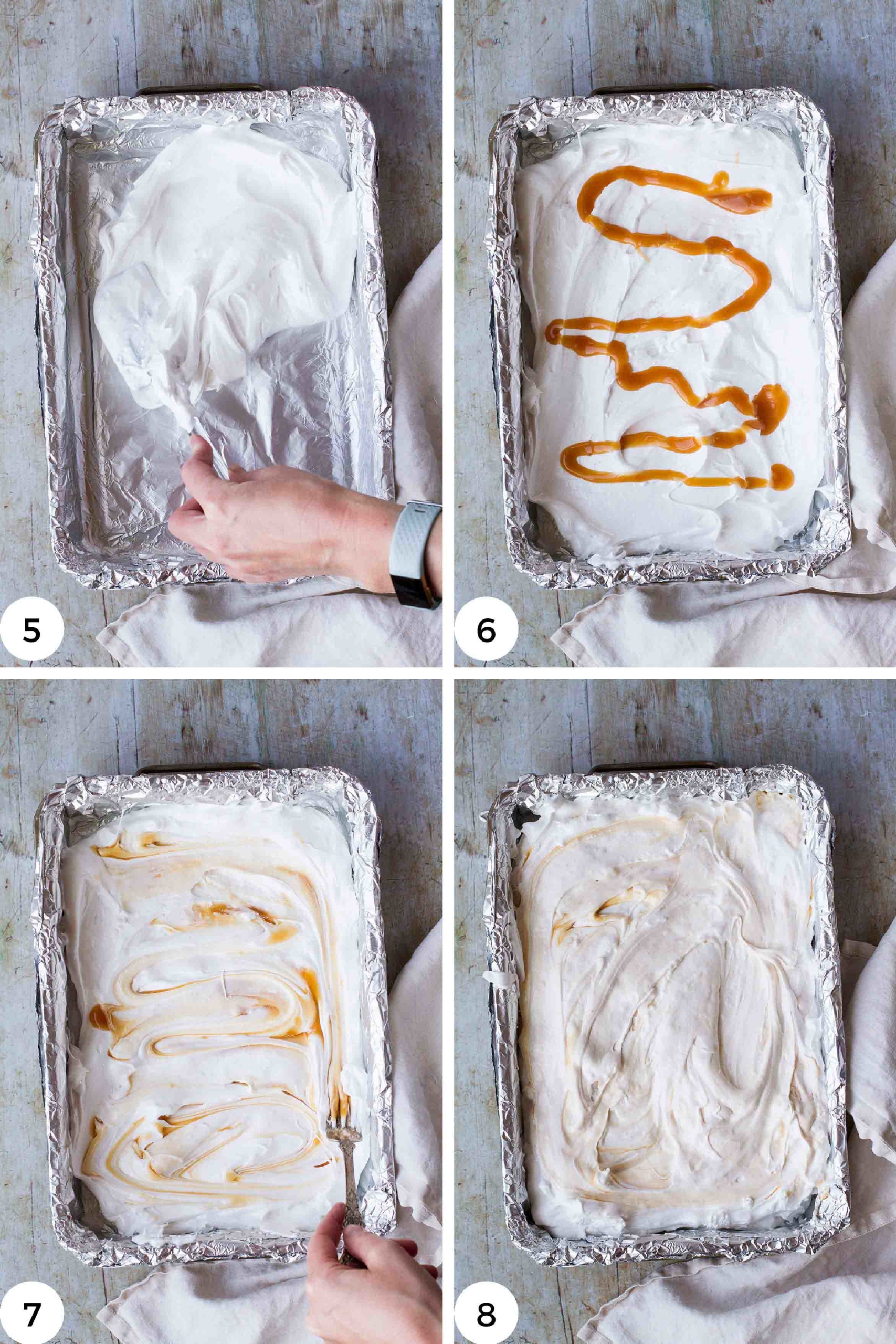 Let it simmer for around 10 minutes, until the mixture reaches 241F (116C)(#3). Meanwhile, squeeze the water out of the gelatine sheets and add them to your stand mixer bowl (#4). When the mixutre is hot enough, take it off the heat and let it cool down until it no longer bubbles. Then slowly pour it along the side of the stand mixer bowl.

Attach wire whip and gradually increase speed until high speed. Let it whip for around 18-21 minutes or until the bowl is barely warm to the touch. Then add in vanilla extract. 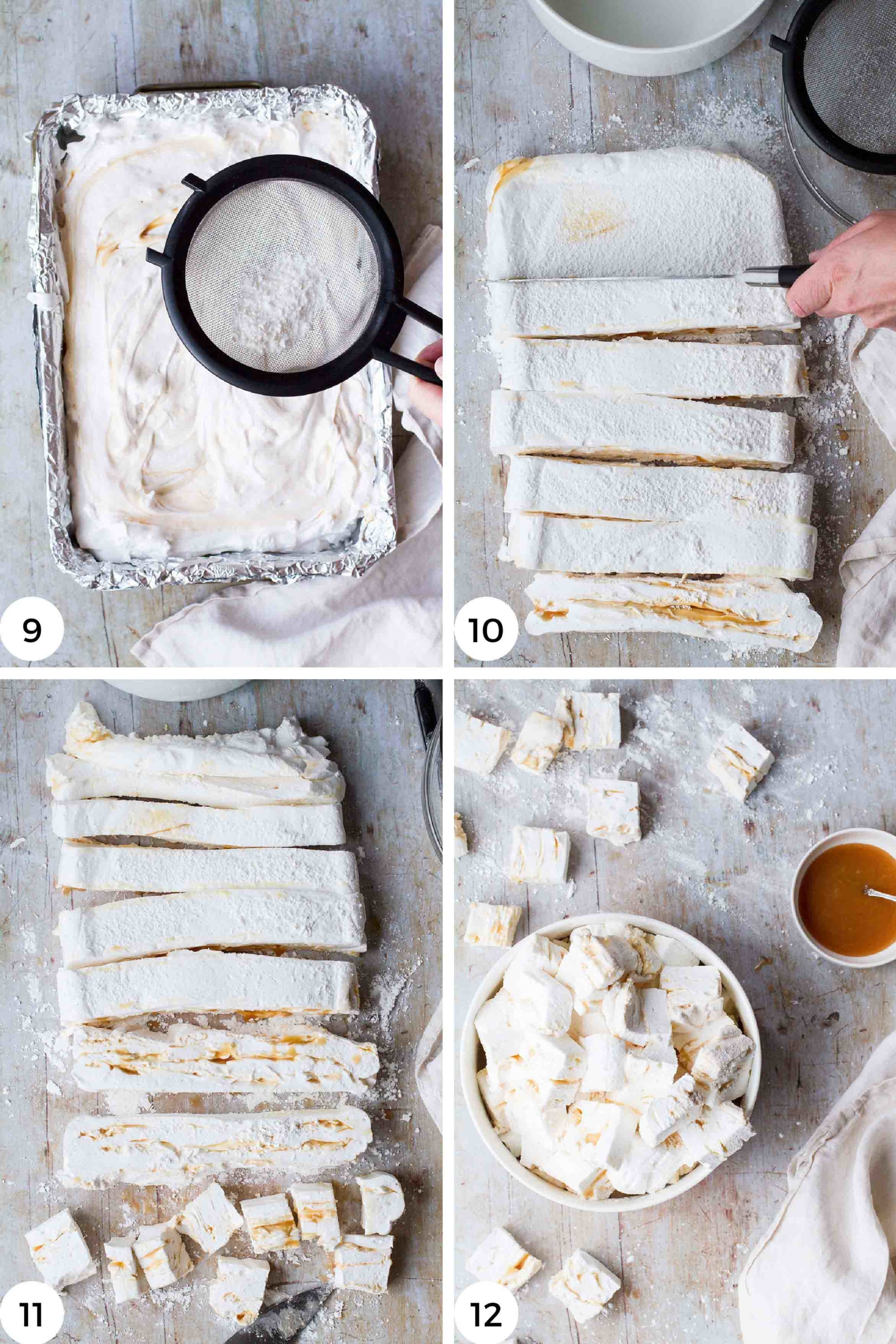 The salted caramel I use here is a little thicker than a sauce so it won't ooze all over the place. It is the same caramel that I use in these milk chocolates, salted caramel macarons and chai cake.

Images numbered 5-8 show this method. And most photos are of rippled marshmallows, however, the photos below are for version 2.

This version will probably be a little less messy (although I was surprised at how little messy the others were too), and will be great for bringing to campfires and keeping in a jar for longer. And this version could also use salted caramel sauce, which is a little thinner. 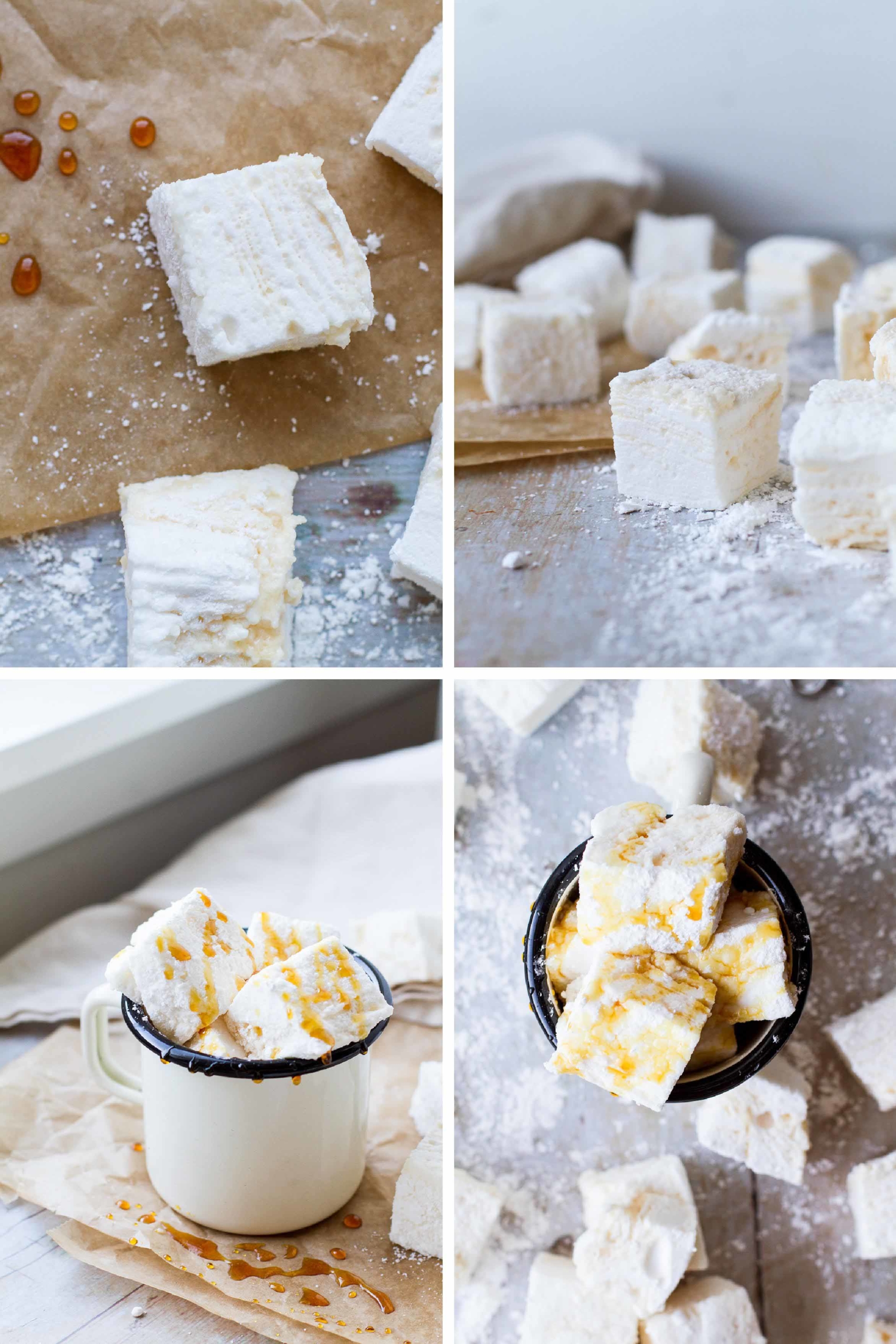 Take half or a third of the marshmallow batter and mix in a large bowl with the salted caramel. Just give it a quick mix, then add it back to the big bowl of marshmallows and give it another quick stir.

You don't have to mix it well, after all, version 1 is barely mixed and that works really well too. 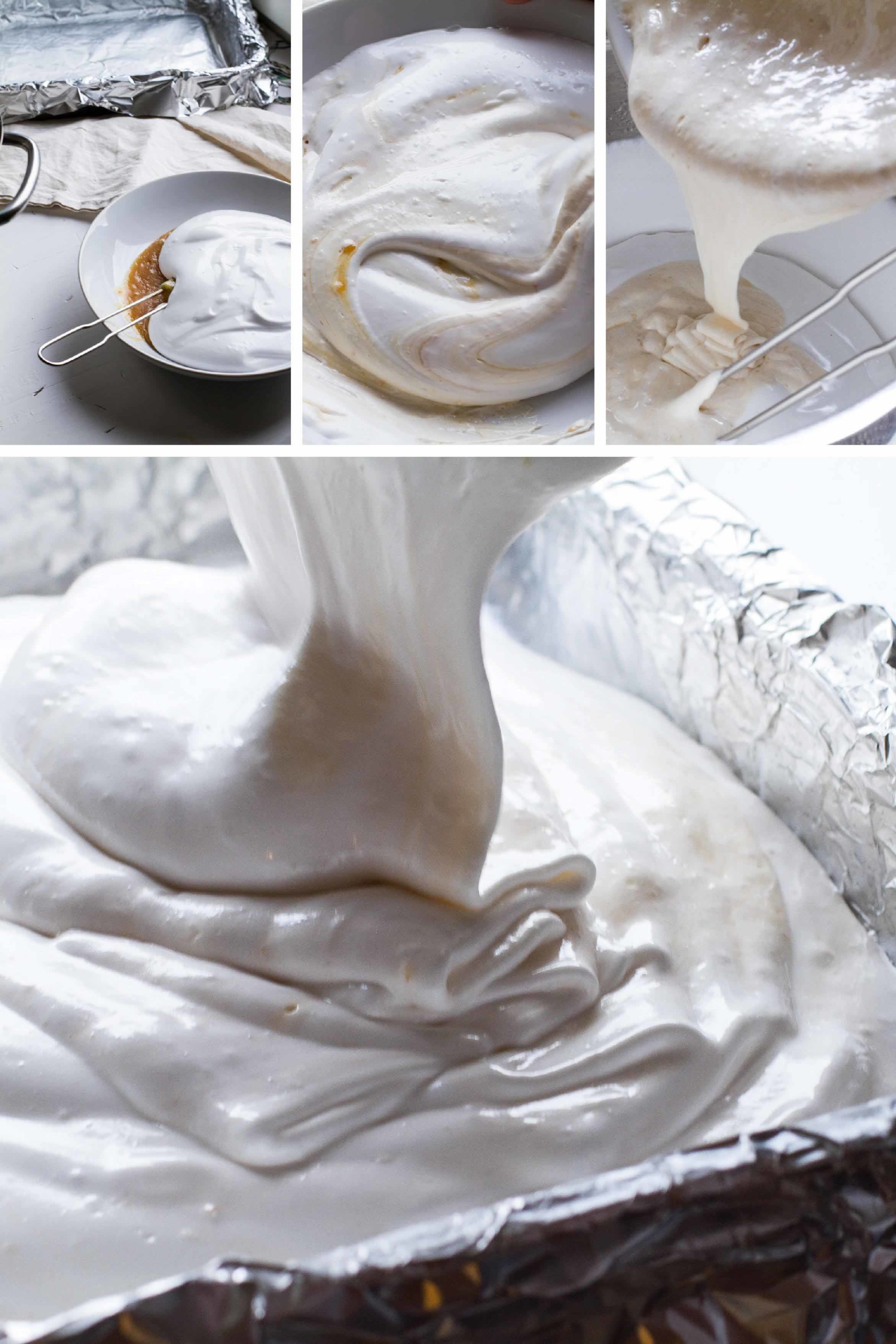 Mix cornstarch and powdered sugar together and sprinkle 2 tablespoon of it on top of the marshmallows. Cover loosely with aluminum foil and let sit overnight before slicing into cubes.

Enjoy with s'mores, toasted on its own or on top of hot chocolate! 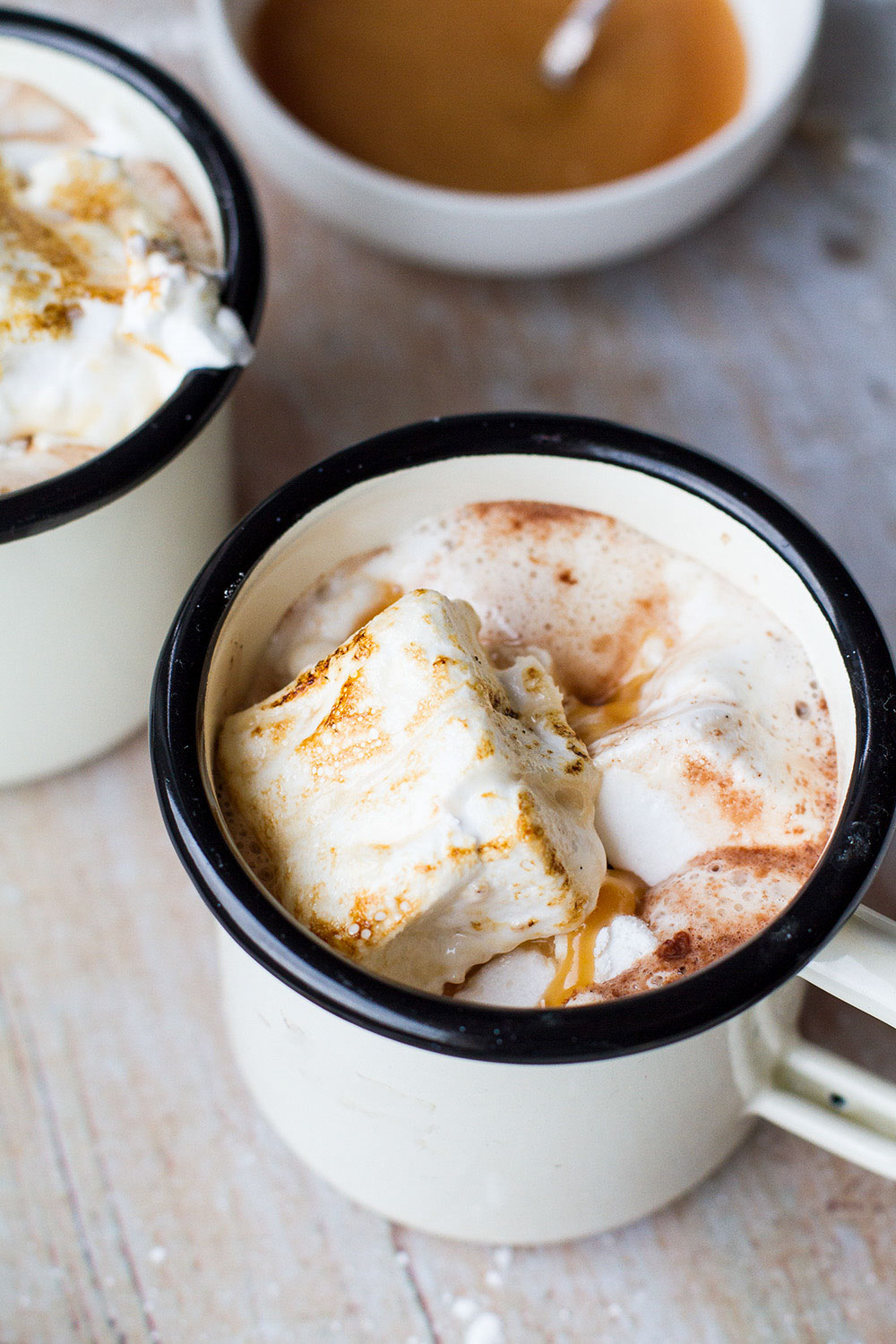 * This recipe completely fills a 13 x 9 in baking pan, so do not choose a smaller one, go bigger if that's all you have. You cut the marshmallows into the shapes you want later, so as long as it's not suuper big, it should be more than fine.

** If you've got gelatine powder instead, add 2.5 tablespoon gelatine in half a cup of water into the mixing bowl of your stand mixer - let sit for 15 minutes. Then break the gelatin mixture with your stand mixer on low speed.

*** Because the mixture rises so much, I would cut the recipe in half if you use a hand mixer.