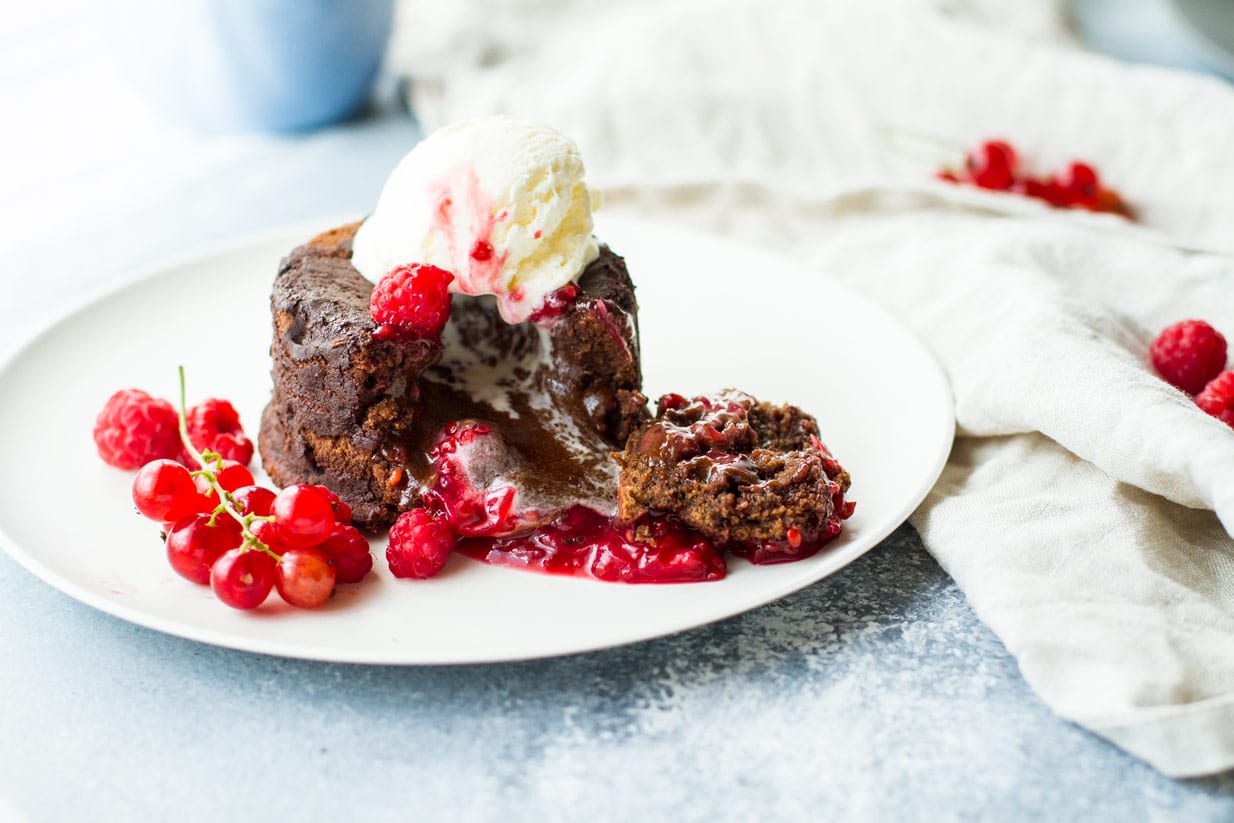 Not much is better than a Chocolate Lava Cake, indulgence and perfection in each bite. A chocolate cake with a ooey gooey chocolate liquid core, served with a fresh Raspberry and Red Currant Sauce. It's easy yet feels really luxurious.

Any excuse to eat melted chocolate, cake batter and the like, and I'll take it. This cake is somewhere in between, and that's also why I love it so much! Tomorrow (August 1st) is my boyfriend and I's 10th anniversary, and it calls for a celebration, don't you think? I chose this Chocolate Lava Cake because it's something he loves as much as me (even though he isn't the biggest fan of brownies, whaat), but also because it is really a romantic and luxurious dessert.

But why is chocolate so romantic?

We both agree that romance and hearts go together, right? And chocolate is good for your heart. It can improve blood flow and reduce blood pressure and reduce risk of heart disease because of low cholesterol. Maybe not this chocolate lava cake is good for the heart in that sense, but I believe it is in my next point;

Chocolate is an aphrodisiac. It boosts serotonin and releases endorphins, which will get you in a better mood (source). So, chocolate makes us happy. 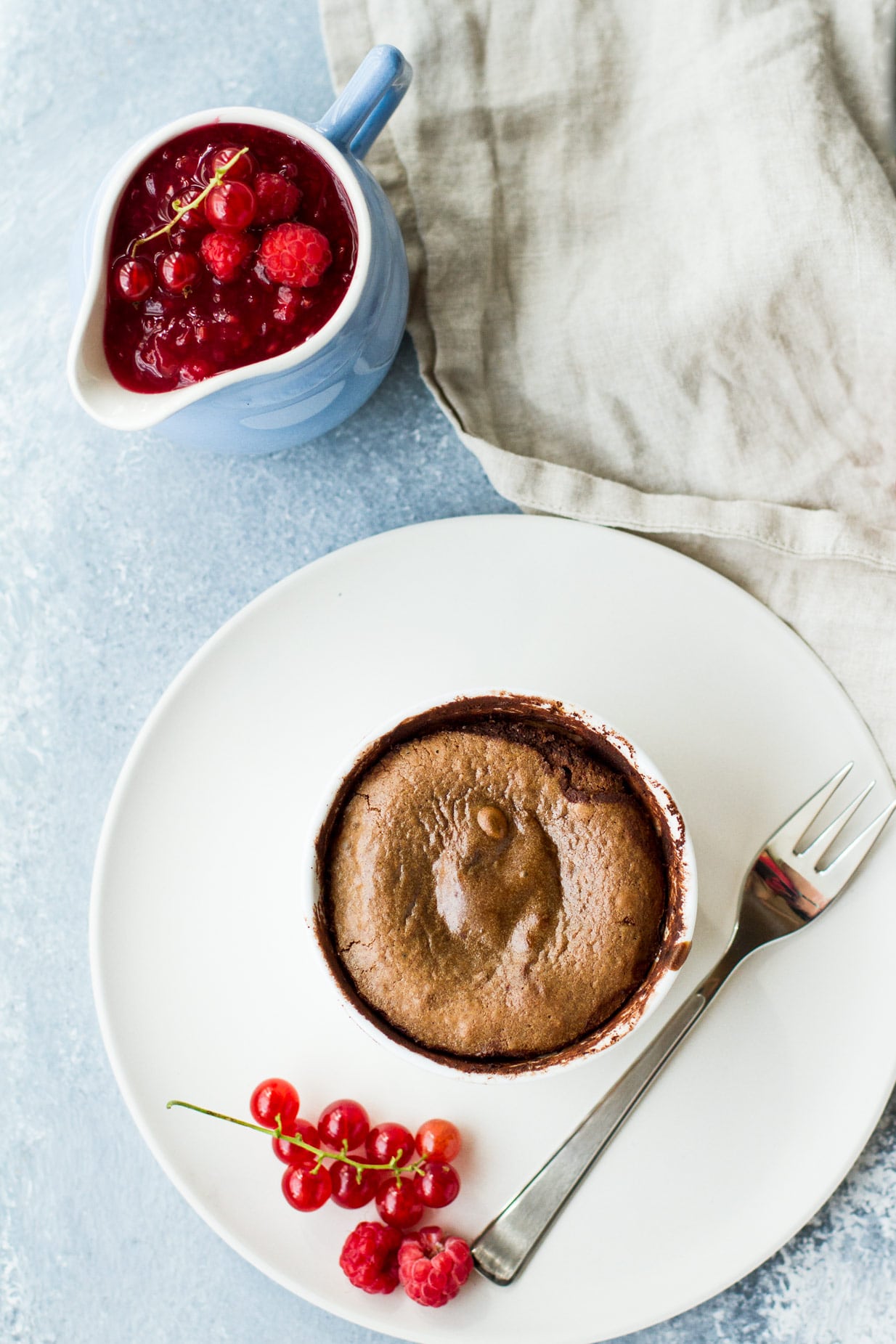 There are so many different names to this dessert, and to the sauce. But it's like they say; A beloved child has many names. I googled this saying, and I'm wondering, isn't it a known saying in English? In Norwegian it's pretty normal. 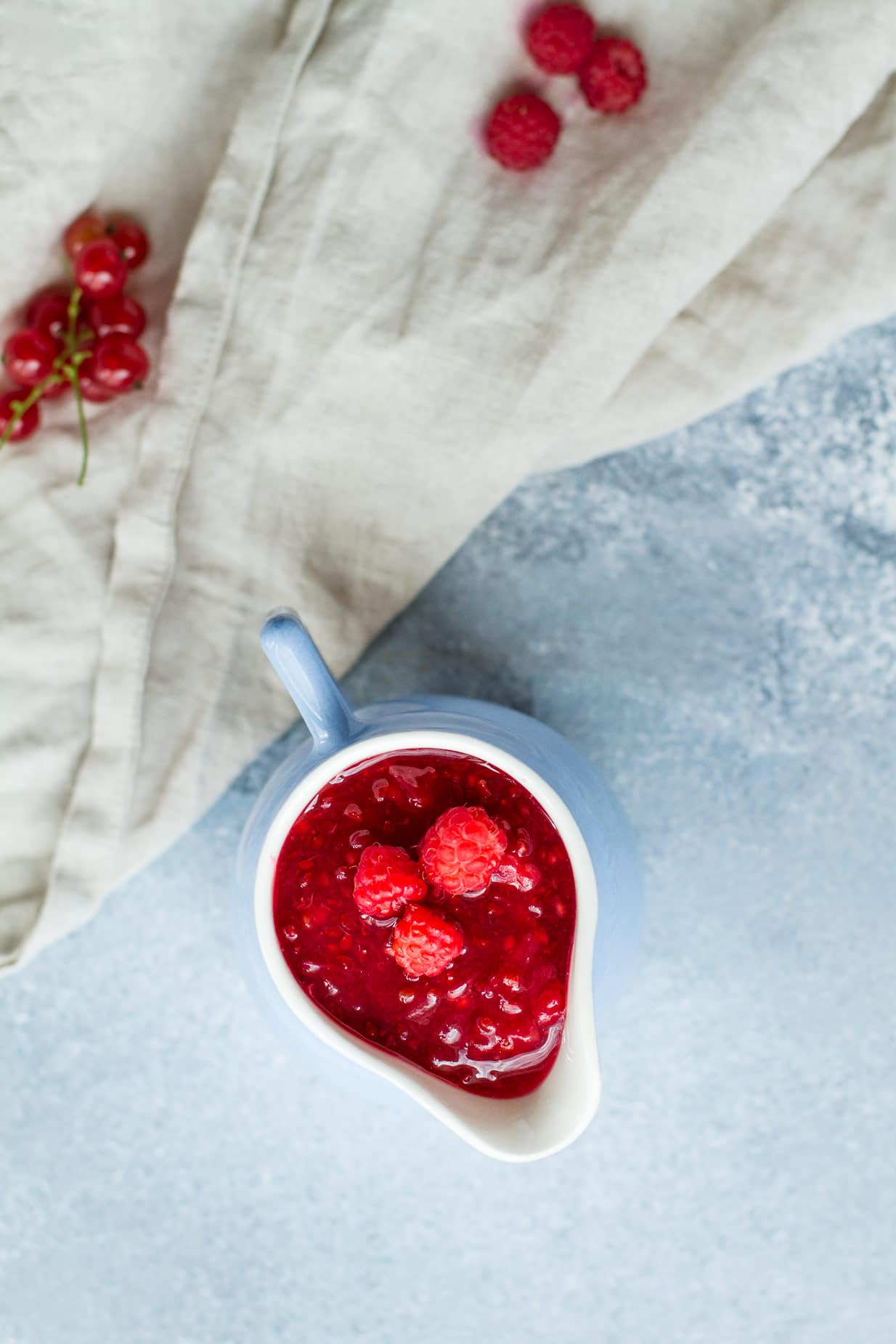 So many choices! With the cake, all the names refer to the same dessert, so it really doesn't matter that much. In Norwegian we usually call it a chocolate fondant. But as I googled my way through this title, I found that a lot of people don't know what a chocolate fondant cake is, so I crossed that off my list.

The sauce/compote/coulis/jam issue is more tricky. It seems like all the different names refer to a slight difference. But they are so small, so I guess I'm just being a perfectionist. I just don't want anyone to point fingers and laugh at me because 'hahaha omg didn't you know that that's not a coulis?' You know.

I figured sauce was more of a safe bet. It's not as chunky as a compote and not as smooth as a coulis.

... loves this season! Last week my mom and I went picking blueberries and raspberries and I was in heaven. We picked over 4 kg (8lb) of berries, but most of them ended up as jam (you know, the fourth difference).

I have so much red currants in my yard, so I decided I needed to use them and that is also why the majority of this sauce is red currants. But it's so difficult to walk past the raspberries, so I picked some more of those too. But in the city there wasn't really as much raspberries as where we picked the week before. Hence this sauce. 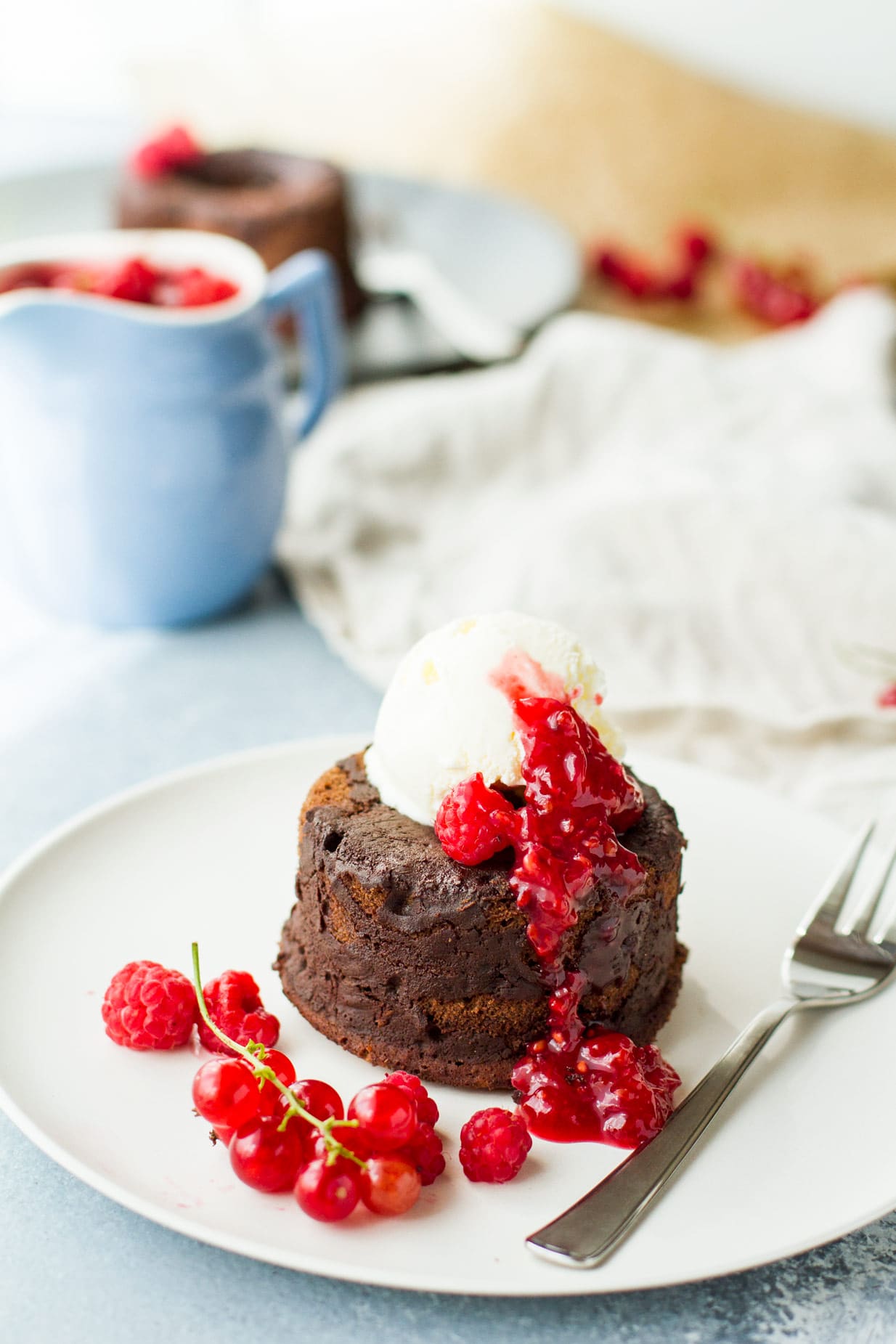 The Chocolate Lava Cake recipe is from BBC Good Food. I have just simplified the instructions a bit and cut it in half. But I love this recipe so much, because it's so easy to remember, with it being equal amounts of most of the ingredients, and it works every time.

. They should be at least 1,5dl/5 oz., because you'll pour about 1,2 dl/4 oz. of batter into them, and they'll rise a bit. Brush them with melted butter and place them in the freezer while you make the batter. You don't have to do this, but it's easier to get the cakes out of the mould afterwards.

When you take them out of the freezer, brush them with another layer of melted butter before you coat them in cocoa powder. Sprinkle 1 teaspoon of cocoa powder into the buttered ramekins and wiggle it around so it covers the entire (insides) of the ramekin. I would also make the raspberry red currant sauce at this point. See paragraph below 'Bake them'. 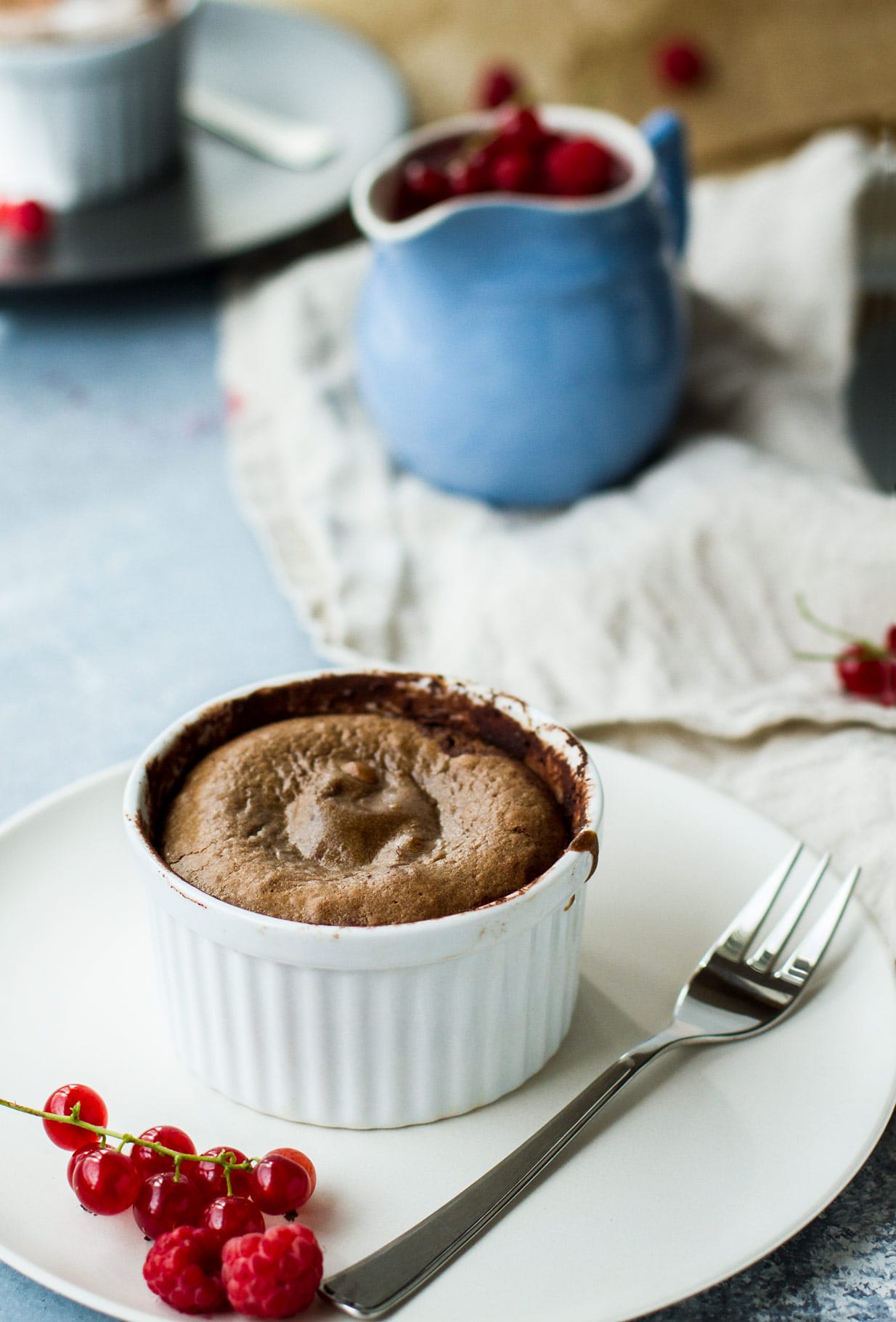 Add chocolate and butter into a large heat proof bowl and place it over a saucepan with barely simmering water. Make sure the bowl is bigger than the saucepan, so the bowl won't touch the simmering water and to not get water into the chocolate. Careful when you remove the bowl from the saucepan, give it a stir until smooth, and let it cool for 10 minutes.

In another bowl, whisk together the eggs, egg yolks and sugar, until thick and pale. You can use a hand mixer

, we don't want to be all sweaty for our romantic date! Sift in the flour and fold using a spatula

. I like to be careful here, because we don't want to ruin the air we created in the eggs. This leads to fluffier cakes. Even though the center is liquid, we don't want a dense cake!

Pour the batter evenly into the ramekins, about 1,2 dl/4 oz. in each (leaving 1,5 cm/0,6in for them to rise). You can now freeze the moulds for up to a month, and just add 5-10 minutes to the baking time once you're ready to eat them!

Place the moulds onto a tray and bake for 10-12 minutes (15-25 if frozen). They are done when the cake lets go of the mould and they've got a crust. Remove from the oven and let them rest in their moulds for at least 1 minute. Be careful when you're going to take them out of the moulds. I like to place the serving plate over the mould and turn it upside down, carefully wiggling and lifting the mould. 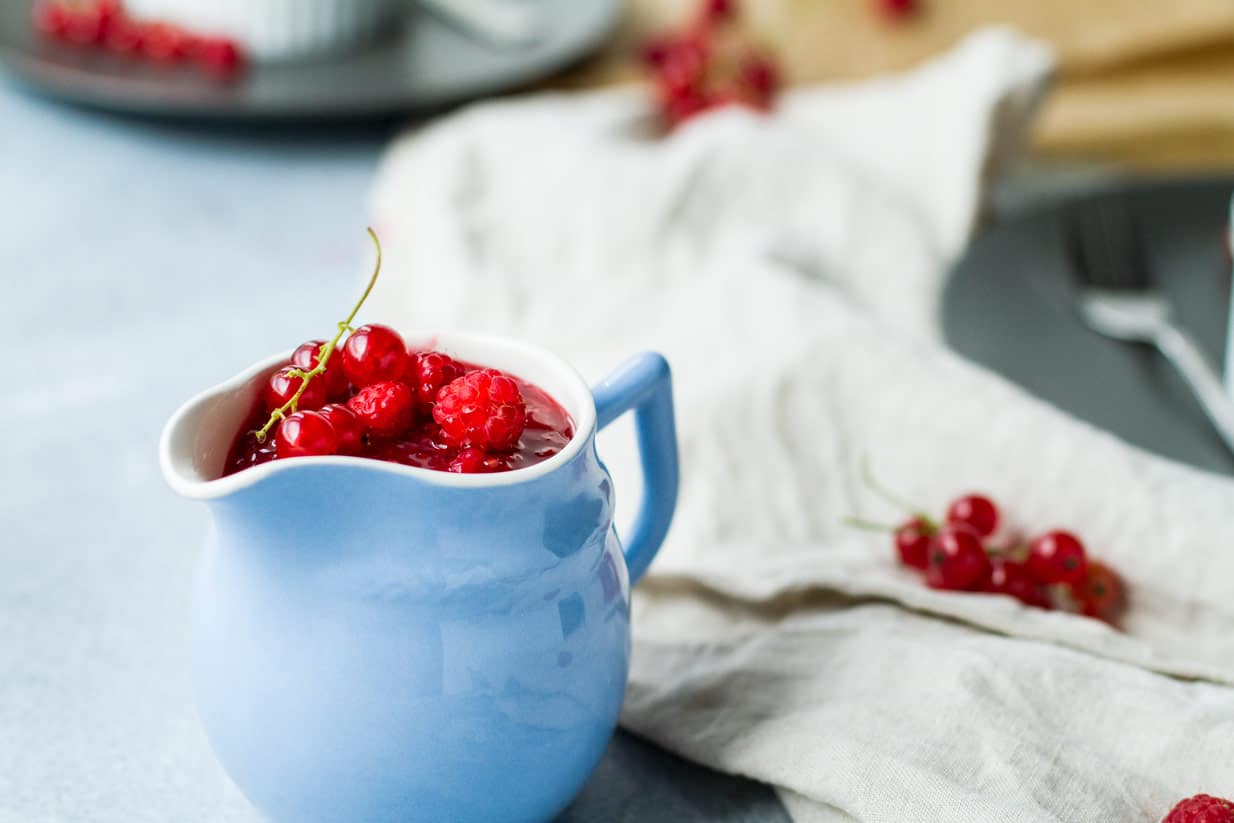 Stop once you've reached your desired thickness, to me it was around 20 minutes, but I could have stopped at 10, I was just doing other stuff at the same time. Once it's cool it will thicken a bit more, just keep that in mind. So if you think it's too thick, just add a splash or two of water.

You are ready to dig in!

I know we are. 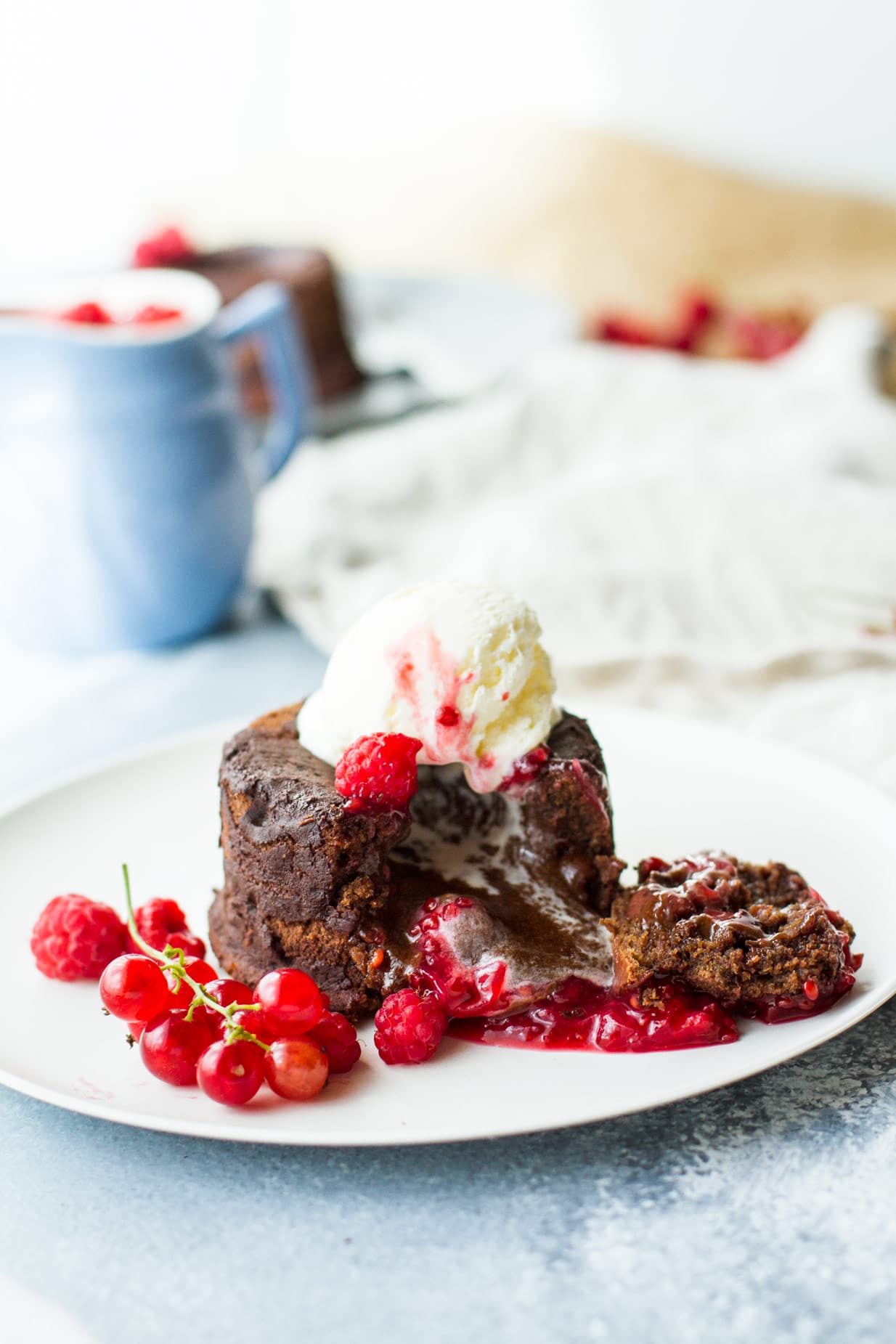 Hope you'll love this as much as we do. I'd love to hear your thoughts, either in the comment section below, or tag me @thegingerwithspice on Instagram. And don't forget to Pin it for later! 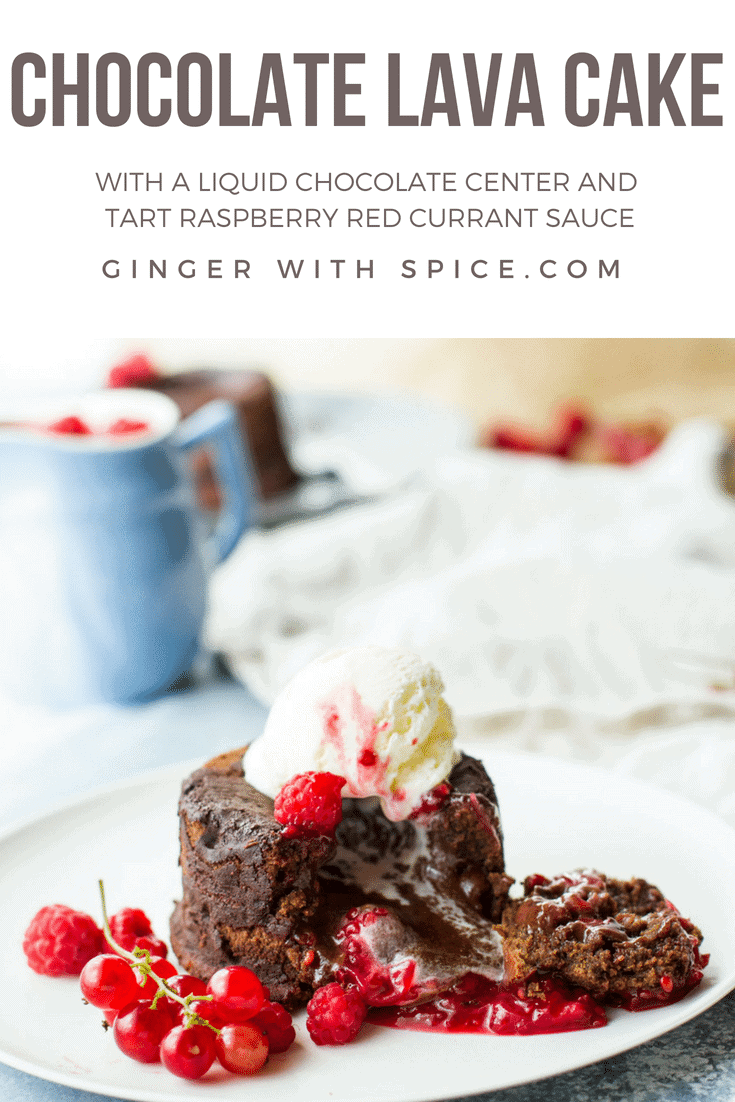 ** If you use frozen batter (in ramekins), you should add 5-10 more minutes to the original bake time. If this time has elapsed and they still haven't gotten a crust and loosened from the ramekin, give it a few more minutes.

Okay, this looks decadent and heavenly and I want it nowwwww!

I know the feeling - thank you so much, lovely!

Oh yum! I'm sucker for anything chocolate and this lava cake needs to happen! Especially when it has red currant sauces. Yum

Thank you so much! The red currant sauce was delicious with this cake.

I can't wait to try this! My husband and I love desserts like this and he especially loves raspberries! I don't think we can get currants around here - do you think I can just use all raspberries in the sauce?

Thank you so much, Stephanie! I really liked the combination with raspberries and red currants, but I also think that all raspberries would be tasty. Is red currants difficult to get in the US or just specifically where you live?

This dessert looks absolutely amazing, fabulous photography! I love lava cakes but have never tried them with currants. Looking forward to trying this recipe.

Thank you so much! Me neither until now, it was a nice addition.

I love chocolate lava cakes. It's one of the few desserts I die for. Have never made it myself! Love to give your recipe a try!

I was surprised at how easy it was, now I make it a few times a year and it's always a success! Thank you so much, Jacqui darling

Get your FREE cookbook 'Travels Through the Seasons'

Subscribe to my newsletter and get a FREE e-cookbook filled with super flavorful recipes for each season!

Add contact at gingerwithspice dot com to your address book to make sure you receive it! You may unsubscribe at any time.

My name is Stine Mari and I am the ginger with a touch of spice, and I love ginger and spicy food.

I also love to make things from scratch, so here you will find from-scratch-recipes with extra spice and flavor. Click here to read more about me.