Homemade Fluffy Peppermint Marshmallows - the fluffiest marshmallows you will ever try and it's super easy to make at home! With a hint of peppermint, these are perfect for Christmas and the cold Winter months in a decadent cup of hot chocolate. And if you like this, I'm sure you will love salted caramel marshmallows the rest of the year! 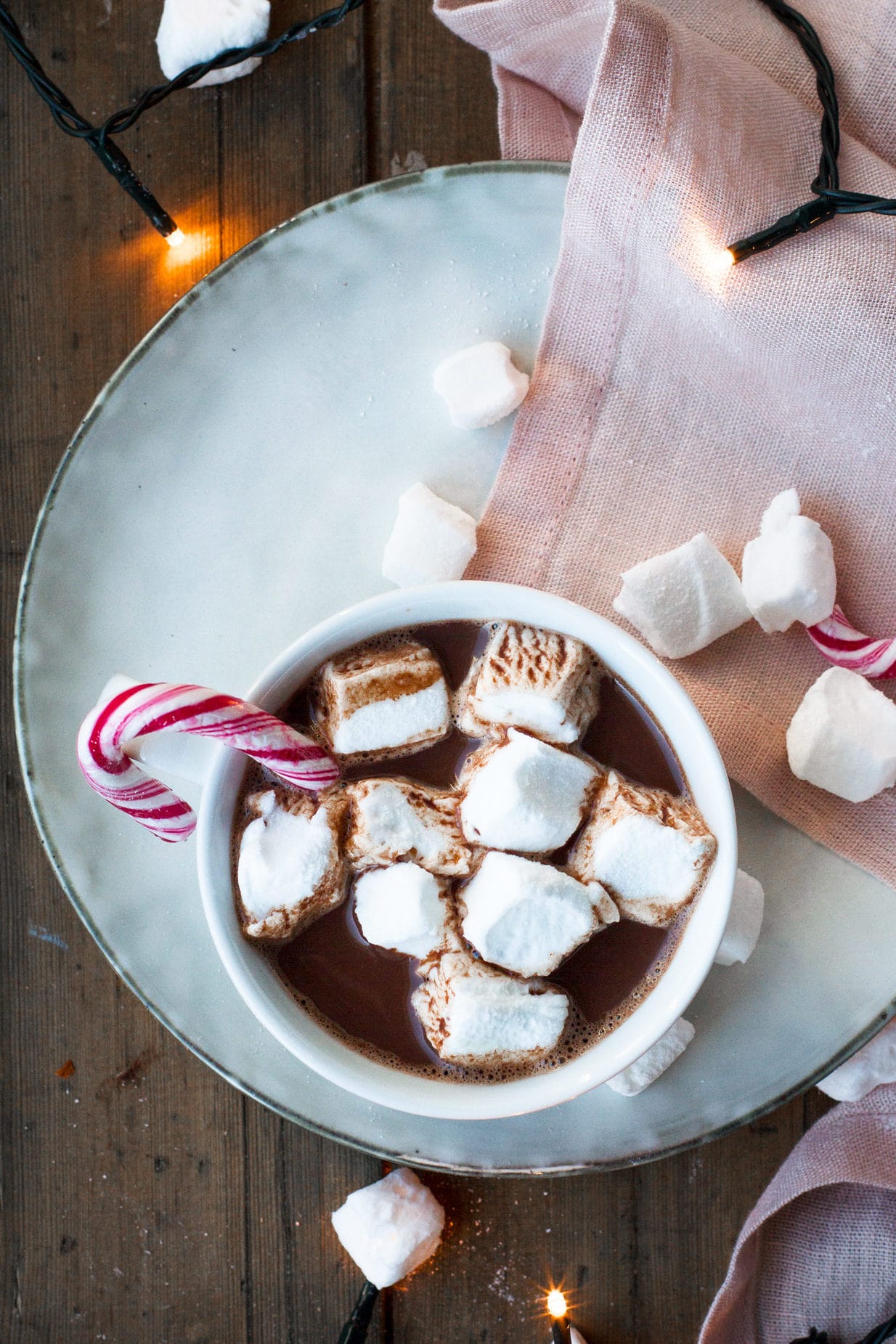 I recently posted a Warming Rich and Decadent Hot Chocolate, and here I got a lot of comments including marshmallows. This gave me an idea as well as an insatiable urge to make marshmallows.

I had never done so before, mostly because I thought it was way hard. And I must say I was wrong, it was actually extremely easy (given you have a stand mixer). If you only have a hand mixer you will get a good workout, but it should come out just the same, maybe opting for halving the recipe. 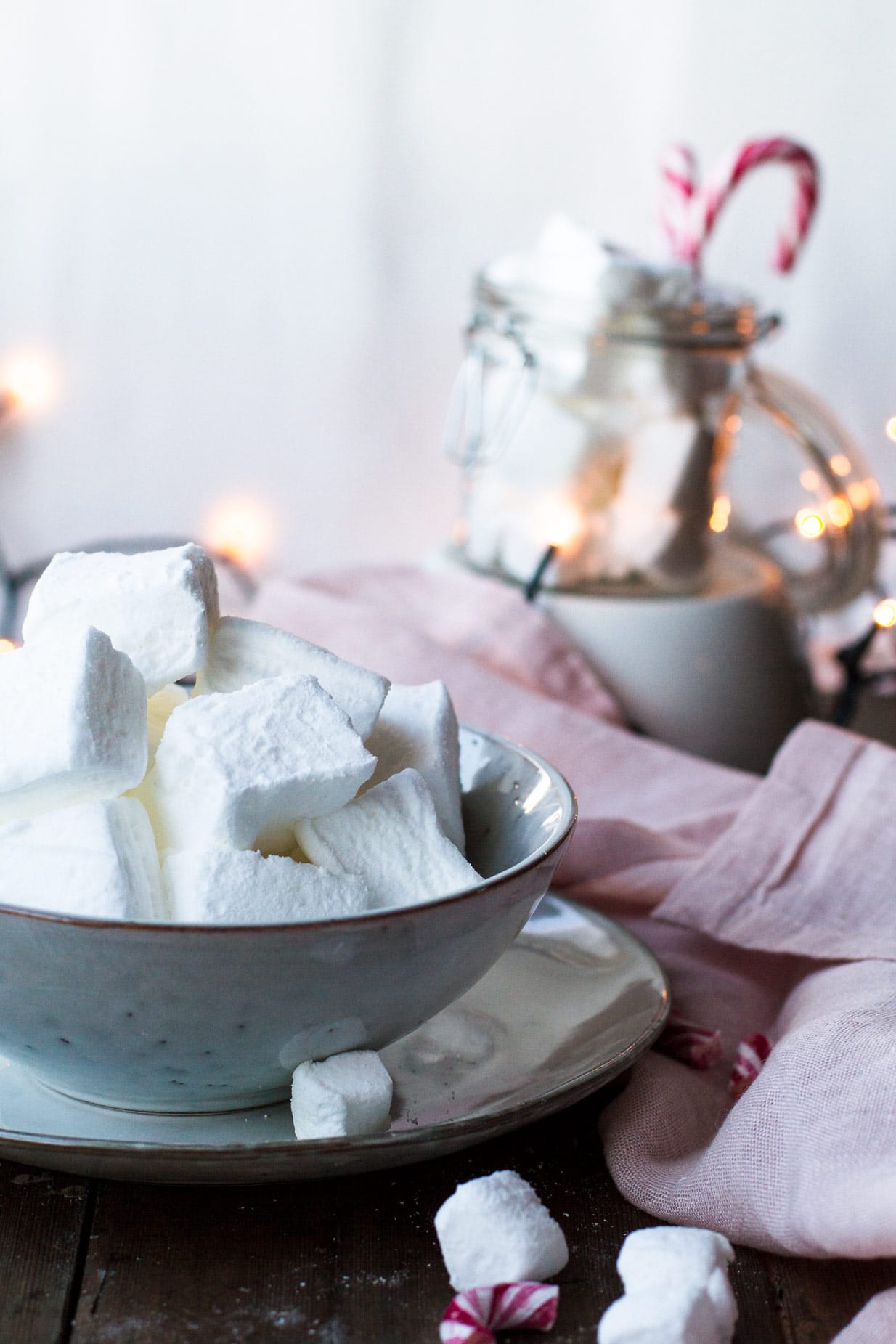 As this was my first time making marshmallows, I went to the great wide internet to find inspiration and techniques. I ended up trying America's Test Kitchen's recipe with a few tweaks.

First, foil a 13 x 9 in (33 x 23 cm) baking pan. The edge of the foil should be sticking out on all sides to make it easier to get the marshmallows out later. Spray generously with cooking spray or oil, and remember the sides! (yes, I didn't have enough on my sides, don't judge me).

This recipe completely fills the 13 x 9 in baking pan, so do not choose a smaller one, go bigger if that's all you have. You cut the marshmallows into the shapes you want later, so as long as it's not suuper big, it should be more than fine. 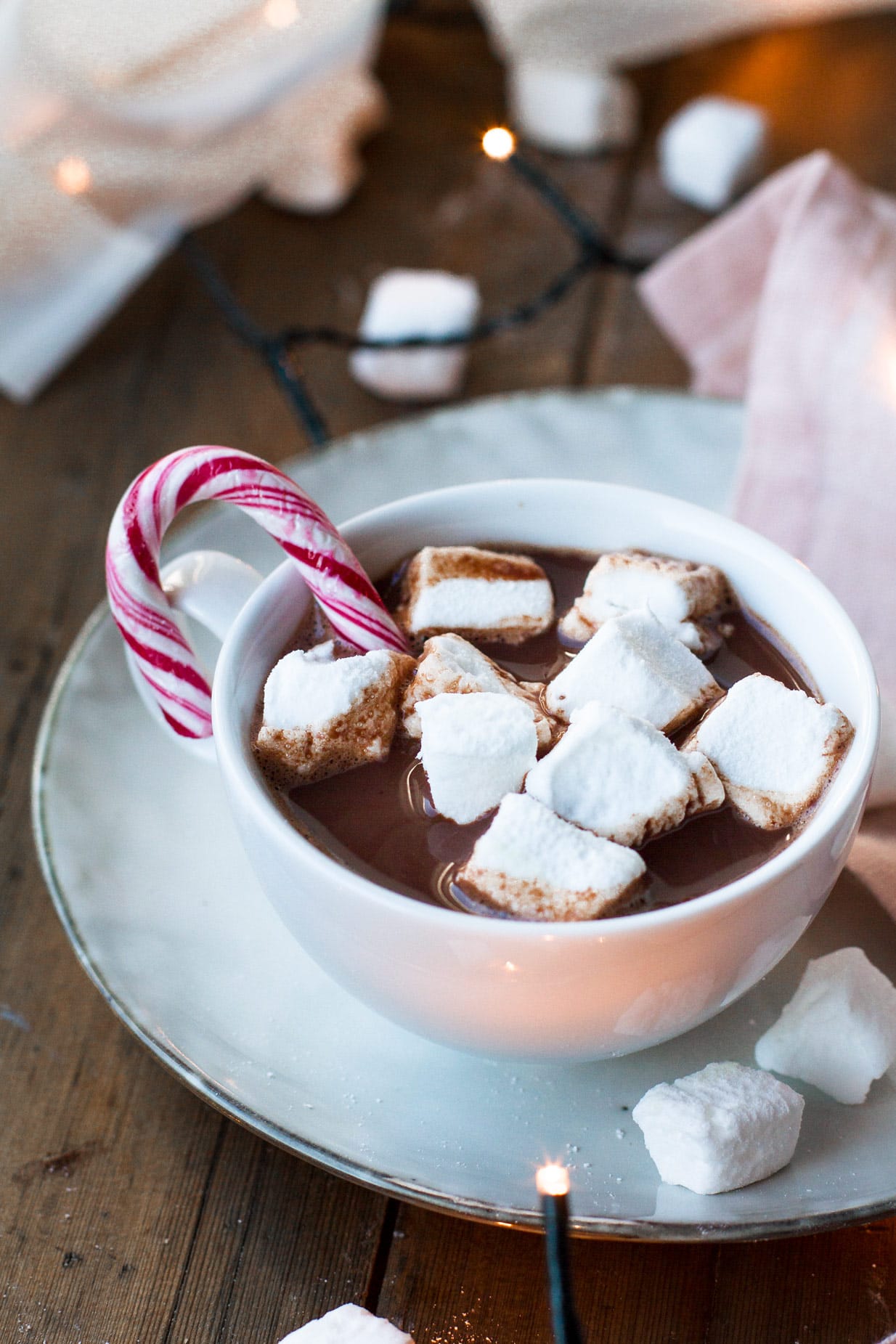 Both gelatin sheets and gelatin powder works in this recipe

Add 15 sheets of gelatin to a bowl or tall glass and completely cover with water. Let sit for at least 5 minutes while you prepare the rest. If you've got gelatin powder (instead of gelatin sheets) add 2.5 tablespoon gelatin in half a cup of water into the mixing bowl of your stand mixer - let sit for 15 minutes.

In a medium saucepan, add 125 ml (½ cup) water, the glucose syrup, sugar and salt. Carefully pour the sugar in, so as not to hit the sides of the saucepan. This prevents crystallization later. Give it a careful stir before putting the heat on. 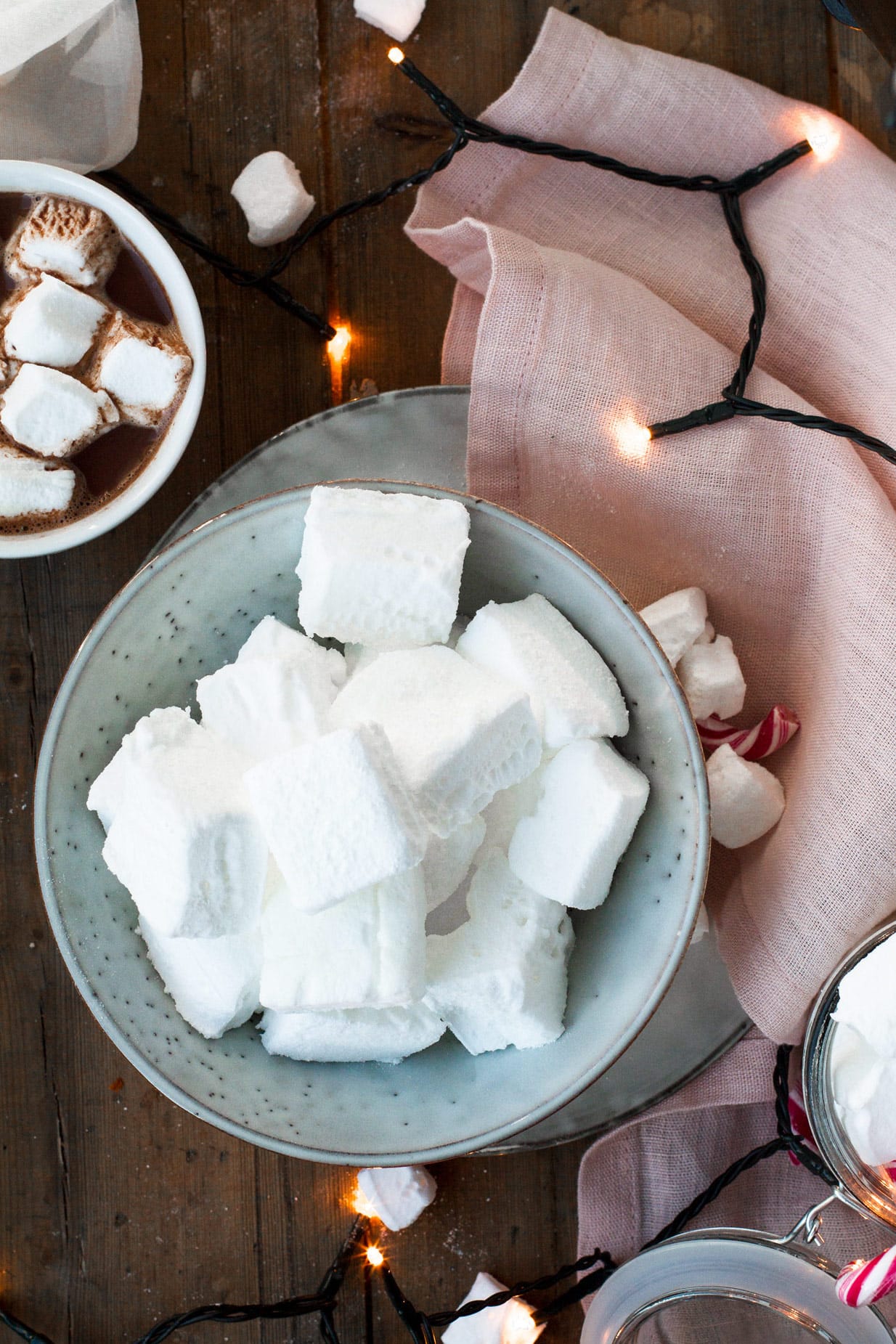 On medium heat, bring it to a boil and let it simmer for around 10 minutes. It should reach 115 C (240F), so I suggest digging out your candy thermometer.

On low speed, carefully pour the sugar mixture into the gelatin in the stand mixer's bowl. Gradually increase the speed to high and let the mixture go for around 18-21 minutes. Start checking the outside of your bowl at 10 minutes, the bowl should be barely warm - then it's done. If it's cold, the marshmallows will stiffen and it's too late. The mixture will fluff up immensely, almost touching the top of your wire whip. Don't worry. But if you use a hand mixer, those are often smaller, so you may need to cut the recipe in half. 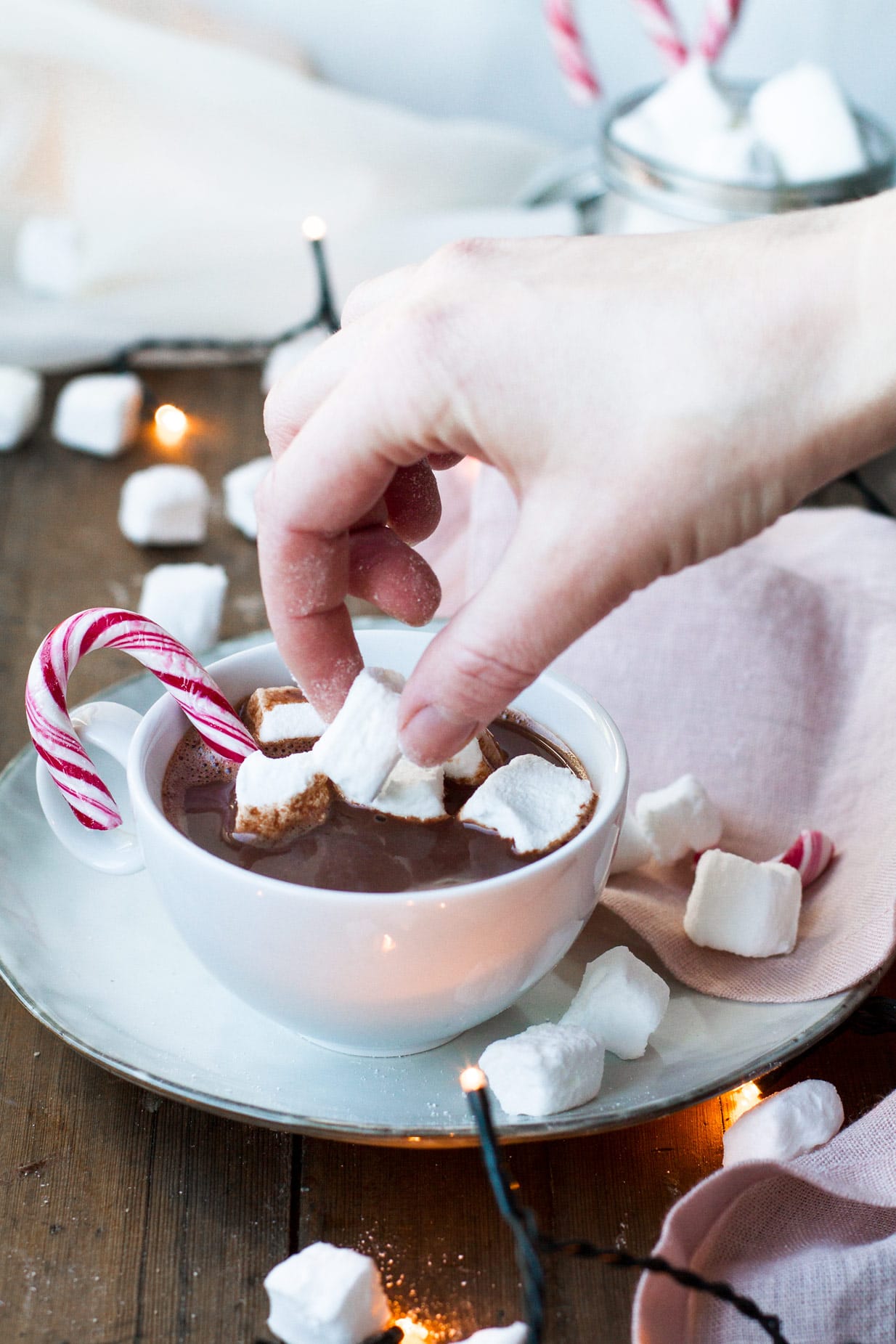 When it's done we need to move fast

Towards the end, pour in the peppermint extract (or any kind of extract). When it's done we need to move fast. Spray a spatula with cooking spray or oil, and quickly pour the peppermint marshmallows into the prepared baking pan. Don't worry if there's still a lot in your bowl, just quickly shape the marshmallows in the pan to avoid it looking funky later. The mixture quickly becomes too sticky to work with.

Whisk together powdered sugar and cornstarch and sift 2 tablespoon of the mixture on top of the marshmallows. Set the rest of the mixture aside for later. Cover loosely with aluminum foil and let it set overnight. I placed it in a moderately cold place. 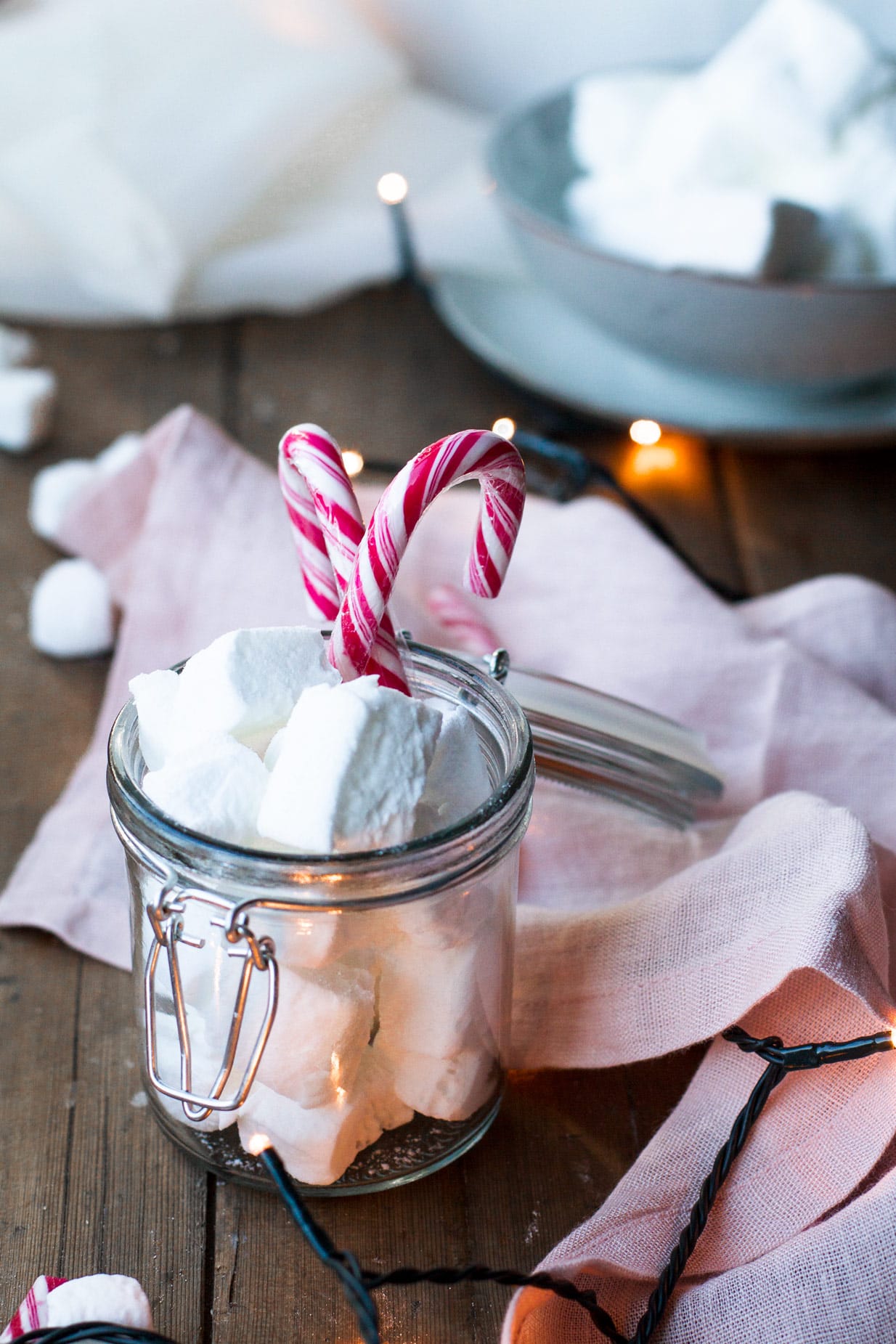 Sprinkle a little of the cornstarch at a clean working surface. Turn the marshmallows upside down and carefully remove the pan and the foil. Sprinkle the top (or it used to be the bottom) with 2 tablespoon of the cornstarch mixture.

Spray your knife with cooking spray and start cutting into your desired size. I cut them in three different sizes, small - medium - large. I found myself preferring the large (wonder why). They melted perfectly in a cup of hot chocolate. They were about 4 x 4 x 1.5 cm in size (1.5 x 1.5 x 0.6 in). 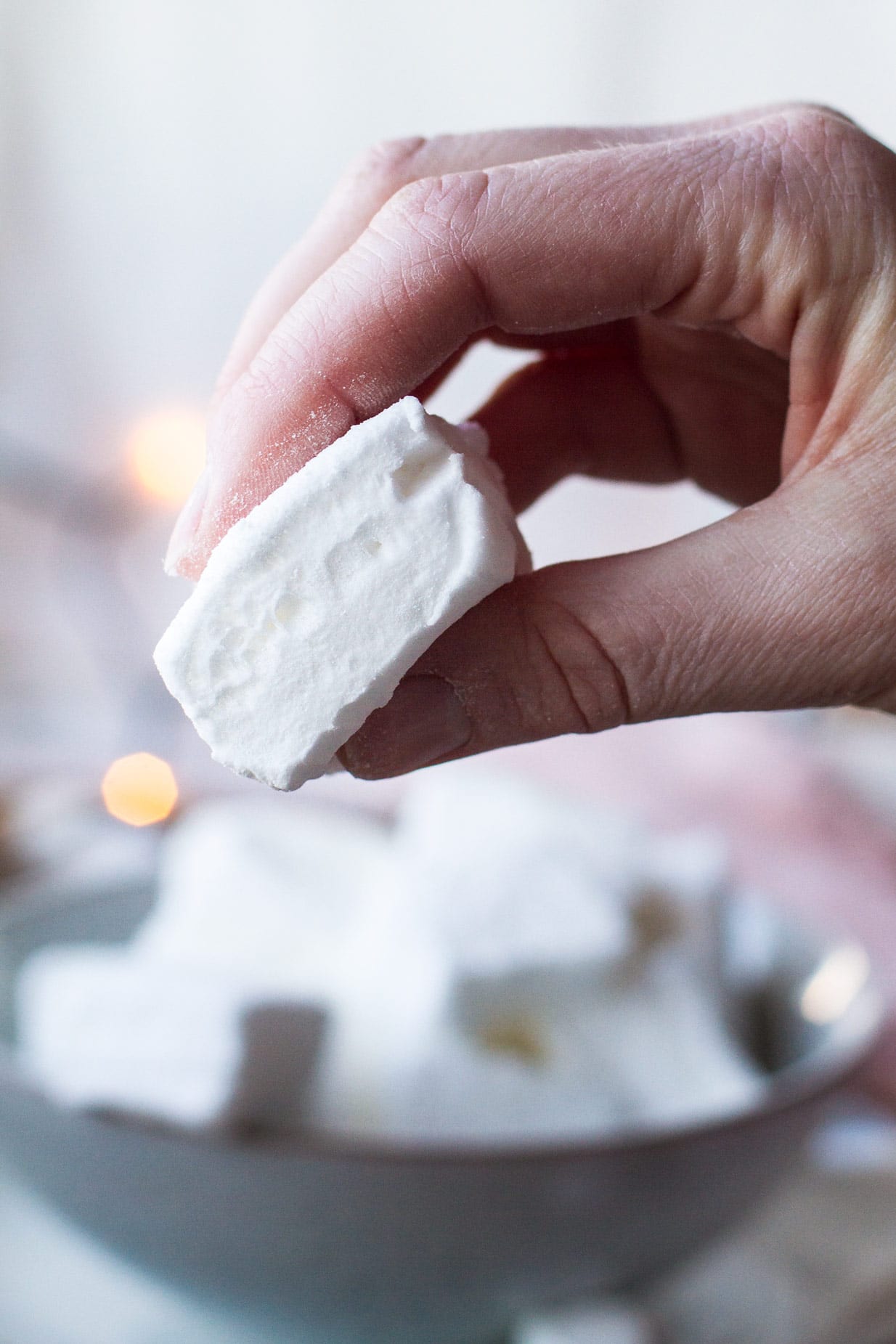 Take a handful of marshmallows and cover them generously with the cornstarch mixture, place them in a sieve and shake off the excess (in the kitchen sink). Continue with the rest. Place in a bowl or your cookie box. Store airtight, in a cool, dry place. Good for at least 2 weeks.

Enjoy in a cup of hot chocolate, but it's also great eaten on its own! 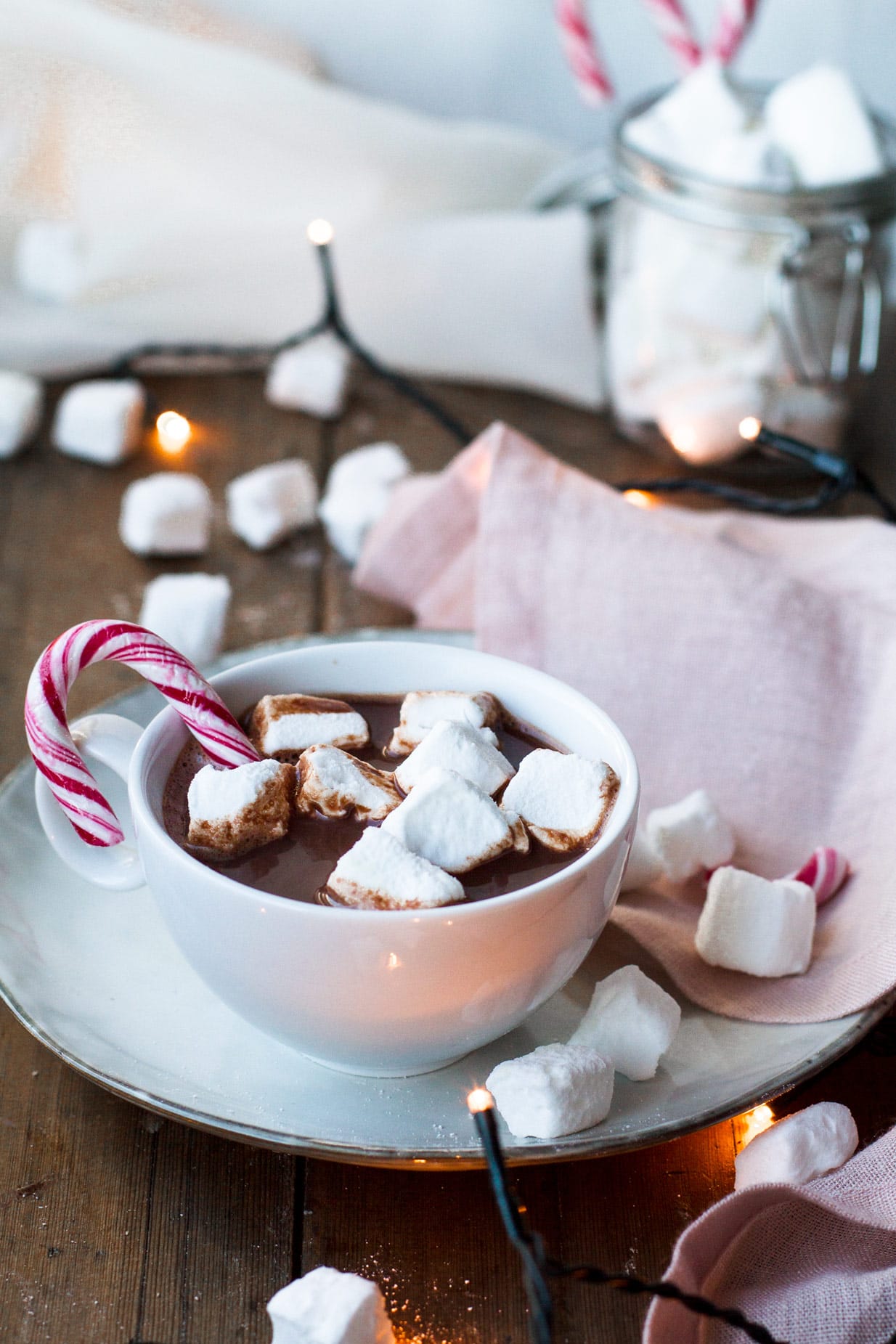 I'd love to hear your thoughts. Let me know either in the comment section below, or tag me @thegingerwithspice on Instagram. And don't forget to Pin it for later!

* This recipe completely fills a 13 x 9 in baking pan, so do not choose a smaller one, go bigger if that's all you have. You cut the marshmallows into the shapes you want later, so as long as it's not suuper big, it should be more than fine.

** If you've got gelatin powder instead, add 2.5 tablespoon gelatin in half a cup of water into the mixing bowl of your stand mixer - let sit for 15 minutes. Then break the gelatin mixture with your stand mixer on low speed.

*** Because the mixture rises so much, I would cut the recipe in half if you use a hand mixer.

I like marshmallows andI always aim for that peppermint flavor! Perfect recipe for me to try in January - thank you!

Peppermint works so great in this! Thank you, April, I hope you'll like it!

I have still not been brave enough to make my own marshmallows! These look so good, and I think it is time I give it a try!

I've never had or eaten homemade marshmallows but I think I'm really missing out so need to try my hand at making some. That cup of hot chocolate with marshmallows looks so scrumptious!

Your food photography is always so beautiful, warm and inviting. And these masrshmallows are delightful! I've never even thought to make them from scratch! Love that you added the peppermint extract, can't wait to try!

Thank you so much, Krista! You are always so kind. Hope you get to try to make marshmallows at least once!

There is nothing like a homemade marshmallow. Adding the peppermint extract is such a great idea!

Perfect for the Holidays, thank you!