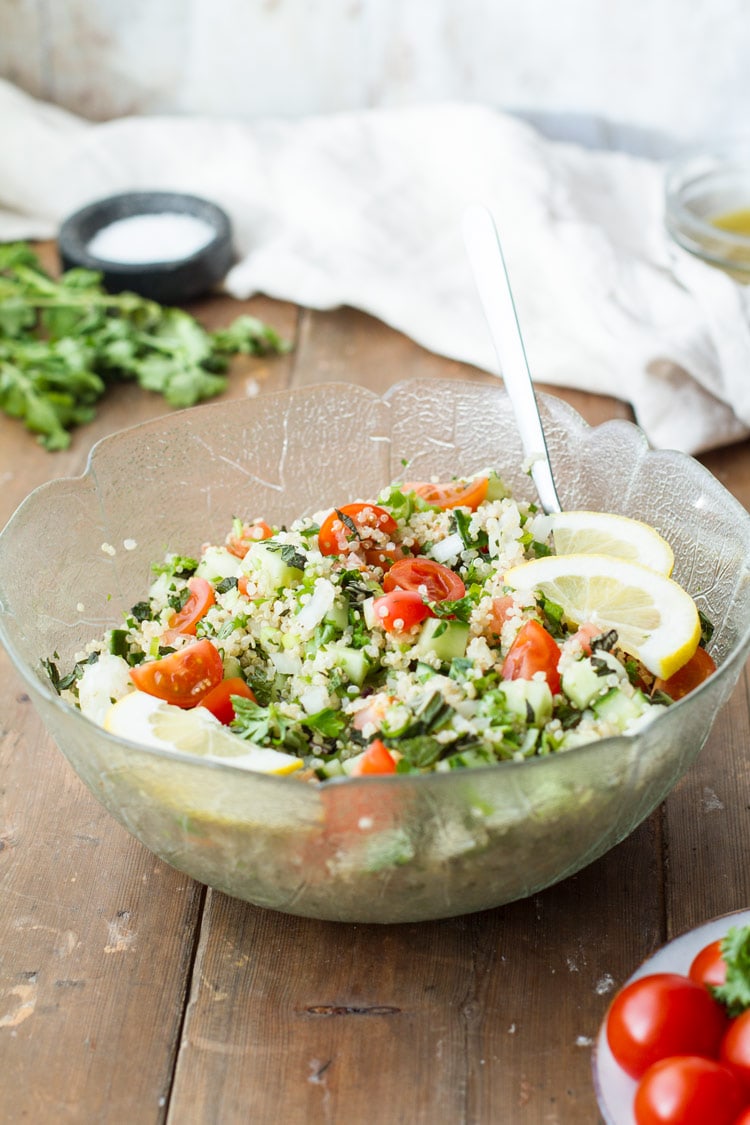 Tabbouleh or tabouli is a super fresh herby salad from the Middle East. My tabbouleh recipe is chock full with flavors of mint, lemon and garlic; the quinoa fills you up and nurtures well and the cucumber and tomatoes elevates it to a super fresh salad.

I've had a kick on Middle Eastern food lately (uhem read: years) and wanted to share with you one side dish that freshens up many Middle Eastern dinners. It's just the past few years I've known about tabbouleh, and wow, I've been missing out.

What is tabbouleh or tabouli?

Tabbouleh is a fantastic herb salad, where parsley truly is the star of the show. The more the merrier! Tabbouleh is usually made with herbs (obviously), garlic, tomatoes, cucumber and bulgur. A light, garlicky vinaigrette of olive oil and lemon juice drizzled over makes this not only healthy, but fresh too.

It is a Middle Eastern salad, most known as Lebanese, but I think all the countries have their own varieties. It is said to be from the Levant region (Jordan, Palestine, Syria, Turkey etc). And no matter who claims the dish, it is absolutely delicious! 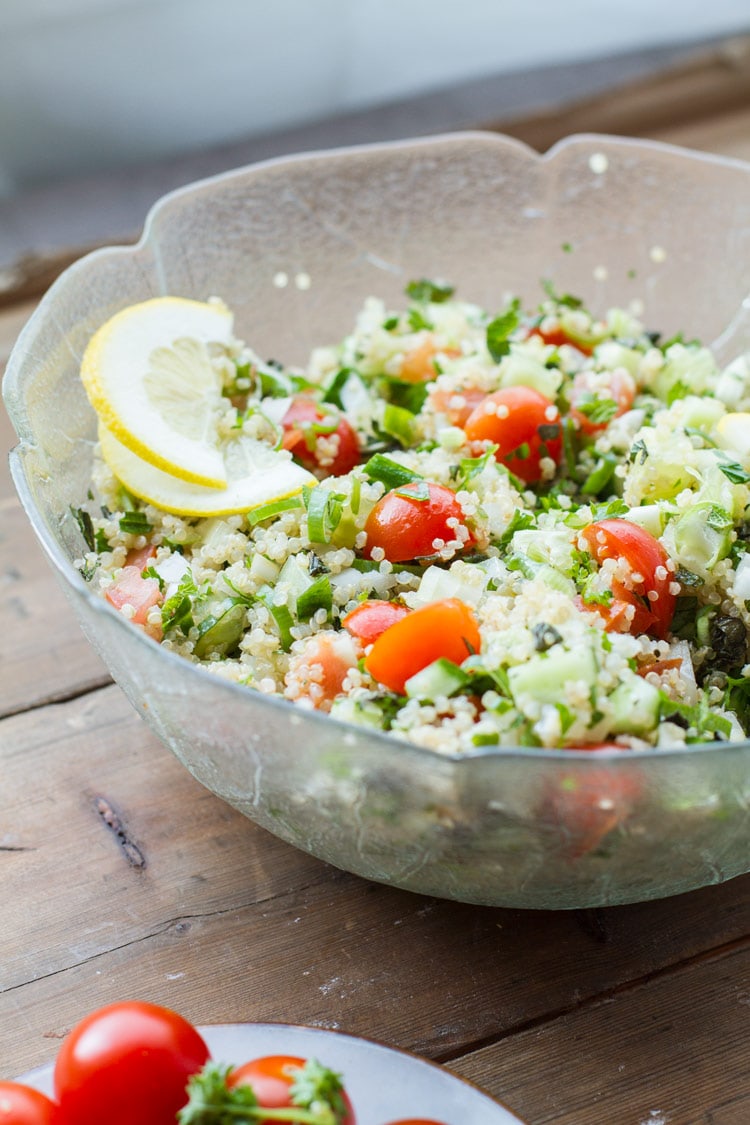 Tabbouleh with quinoa or bulgur

Ok, so many think that the star in a tabbouleh recipe is the bulgur wheat. I don't agree with this, and many agree with me, that this is first and foremost an herb salad. The bulgur helps making it more filling and comforting, but it's not the most important thing.

I do not use bulgur in my tabbouleh, I actually prefer quinoa. Although quinoa originates from South America, I still think tabbouleh with quinoa is getting more and more popular and widespread. So what is the difference between them? 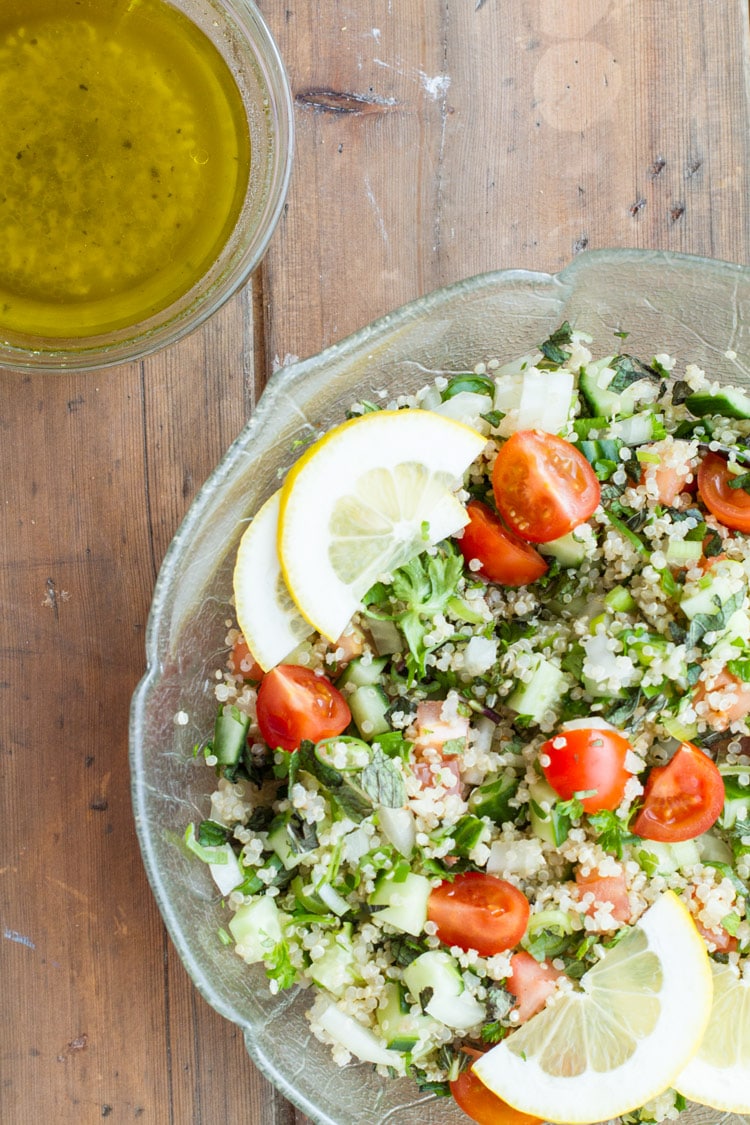 Ingredients in a tabbouleh salad

So to summarize what's in a tabbouleh salad, here's a list

So simple, yet the flavor is unforgettably delicious. I fell in love with this Middle Eastern salad the first time I tried it, and now I try to incorporate it into all my Middle Eastern inspired dinners. If you are a sucker for herbs like me, then this tabbouleh recipe is definitely for you! 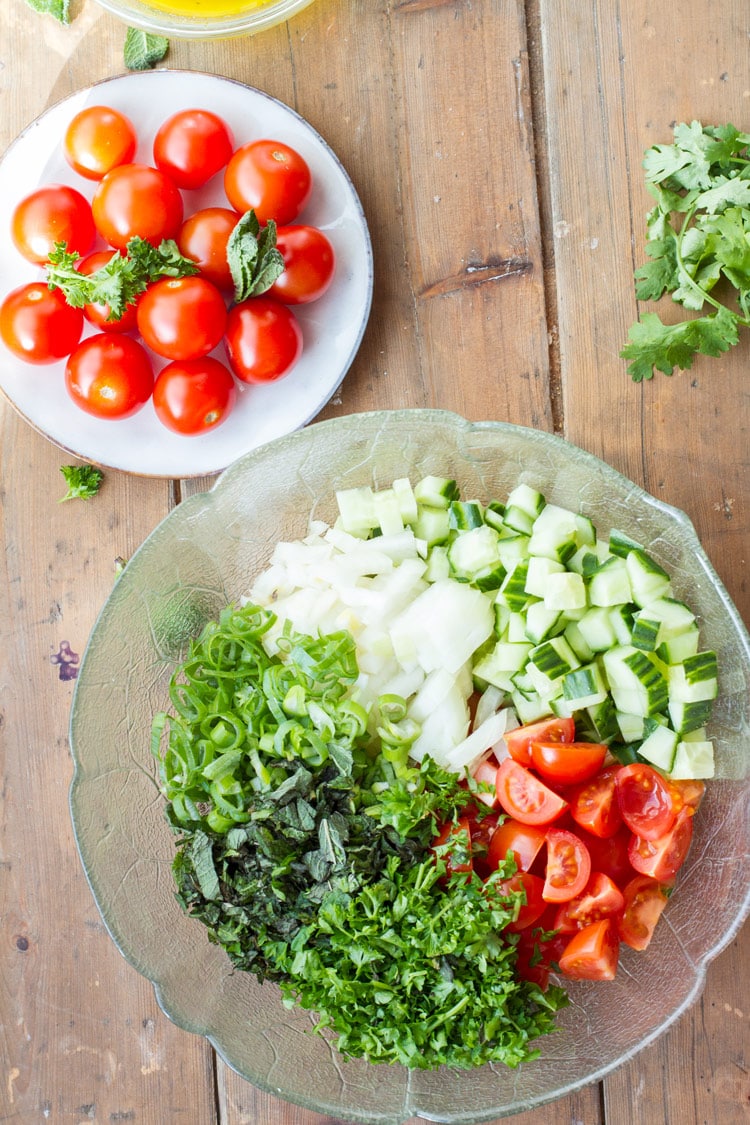 What to serve with this tabbouleh recipe

All Middle Eastern food is great with tabbouleh. Healthy baked falafel is a favorite, but I usually eat it with this amazing chicken shawarma. Instead of the green spring salad, you could very well make this tabbouleh salad and serve with my healthy baked lemon chicken for a super fresh and healthy meal.

I'm also thinking about swapping the quinoa in this halloumi quinoa salad with tabbouleh to herb up the situation. I actually think I can never get enough herbs. It is great for lunch along with a garlic yoghurt dressing and warm pita or naan. That's actually what I had for lunch today. 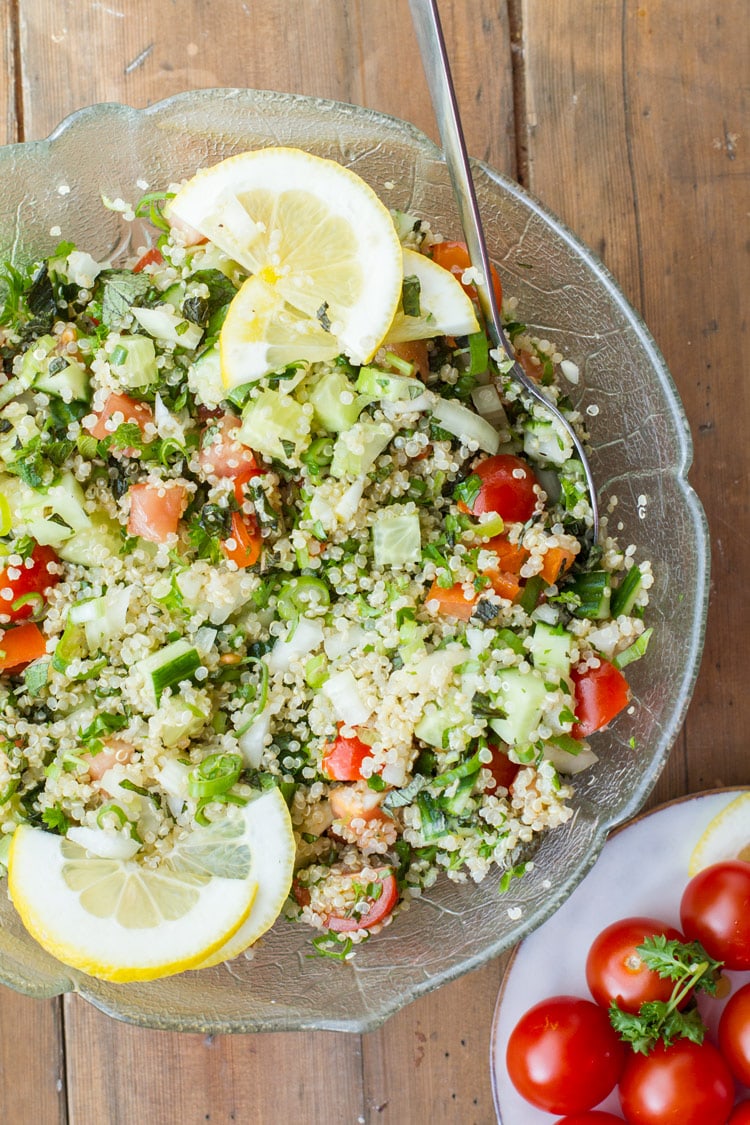 How to make this Tabbouleh Recipe with Quinoa

It's important to rinse the quinoa well before continuing with the recipe. I rinse it in boiling water.

Boil water in a medium sized saucepan. Add quinoa and salt and reduce temperature to let it simmer, covered, for 15 minutes, or until all liquid has absorbed and the quinoa is puffed up. Remember that quinoa quadruples in size once cooked. Remove from the heat and let it rest, covered, for 5 more minutes. Fluff it with a fork.

While the quinoa is cooking, make the dressing. Whisk together lemon juice and garlic in a small bowl. Gradually whisk in olive oil so it won't separate. Season the dressing with salt and pepper. 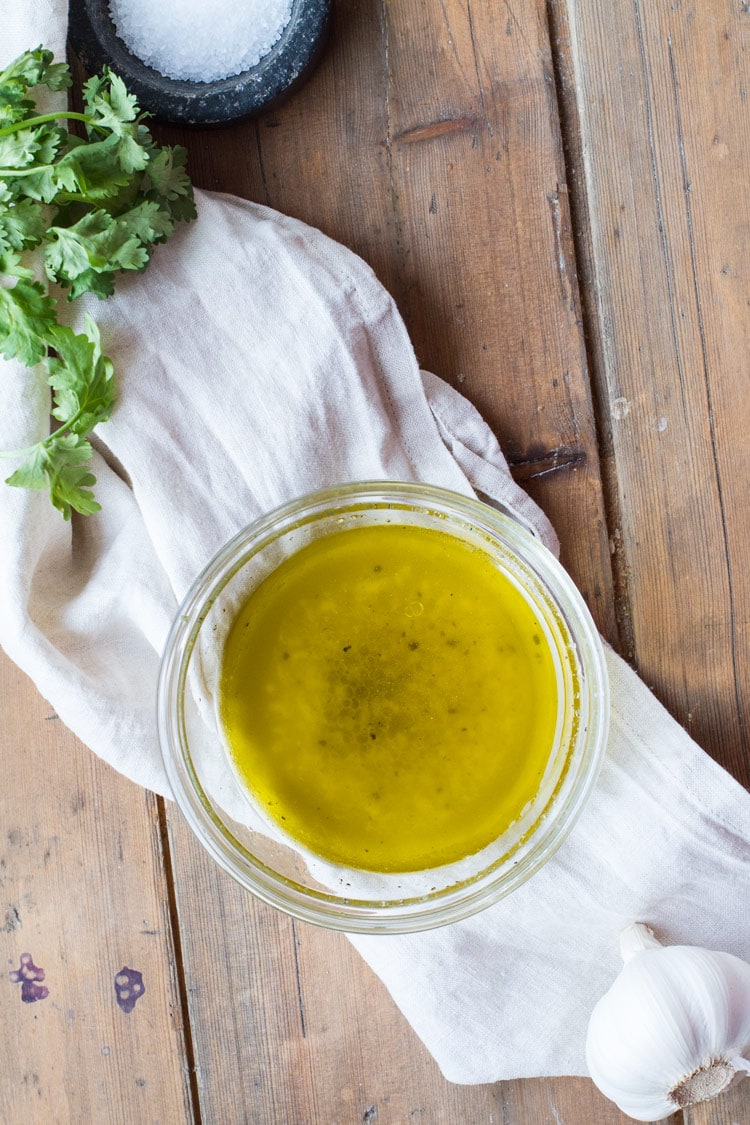 Spread the quinoa out on a large parchment paper or a plate, and let it cool. Once cool, add it to a large bowl and whisk in half of the dressing. Chop the vegetables and add them to the quinoa. Mix in the rest of the dressing, season it with salt and pepper and you are done. That's it.

Tabbouleh usually has finely chopped vegetables, but I find that I like the chunks from the tomatoes and cucumber. You may chop them however you like.

Tabbouleh or tabouli salad doesn't necessarily need to be served with Middle Eastern food. It is a citrusy, herby and fresh quinoa salad that works with almost anything!

Did you enjoy this tabbouleh recipe? Why don't you try these quinoa dishes too! 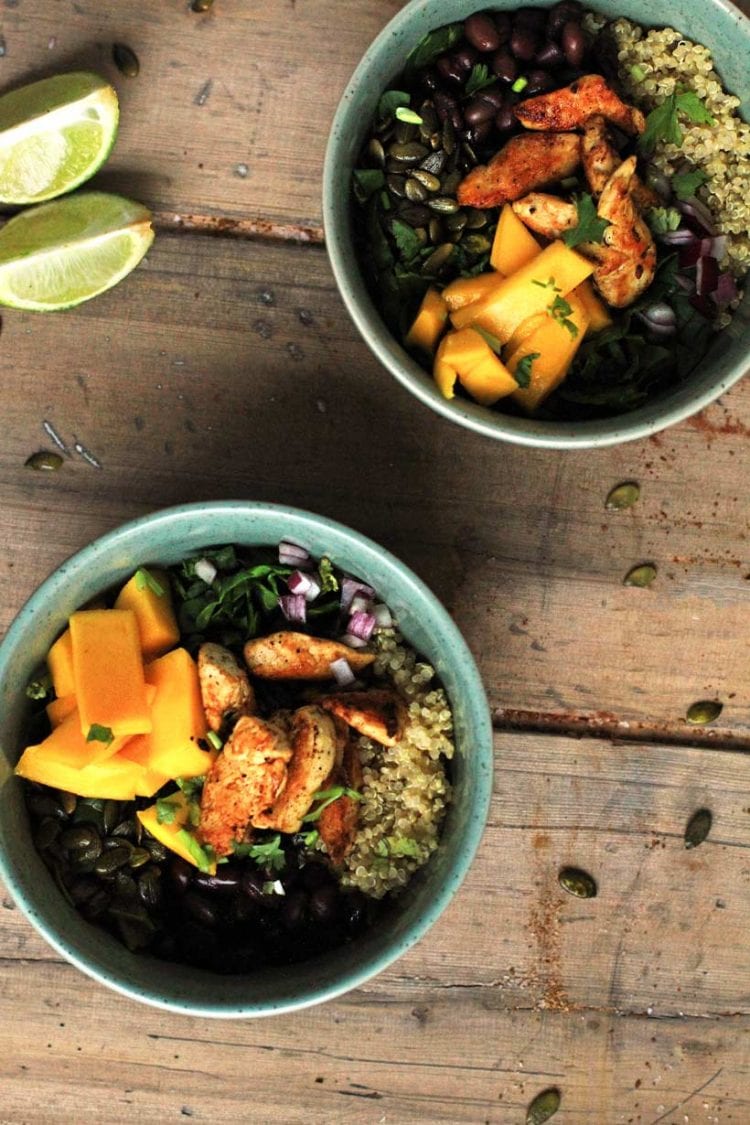 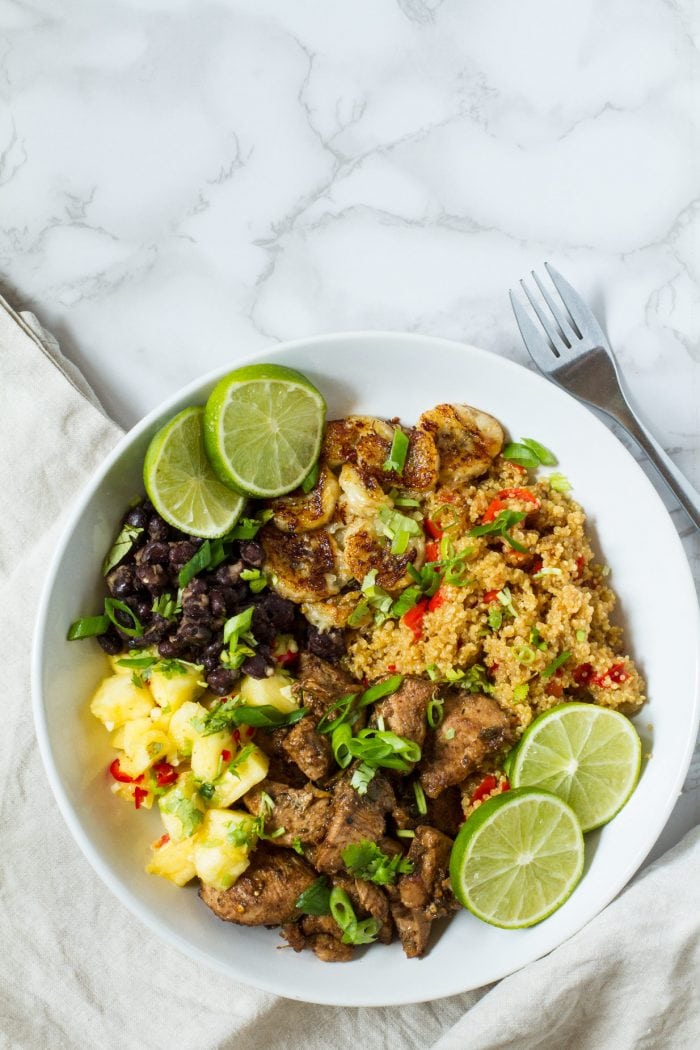 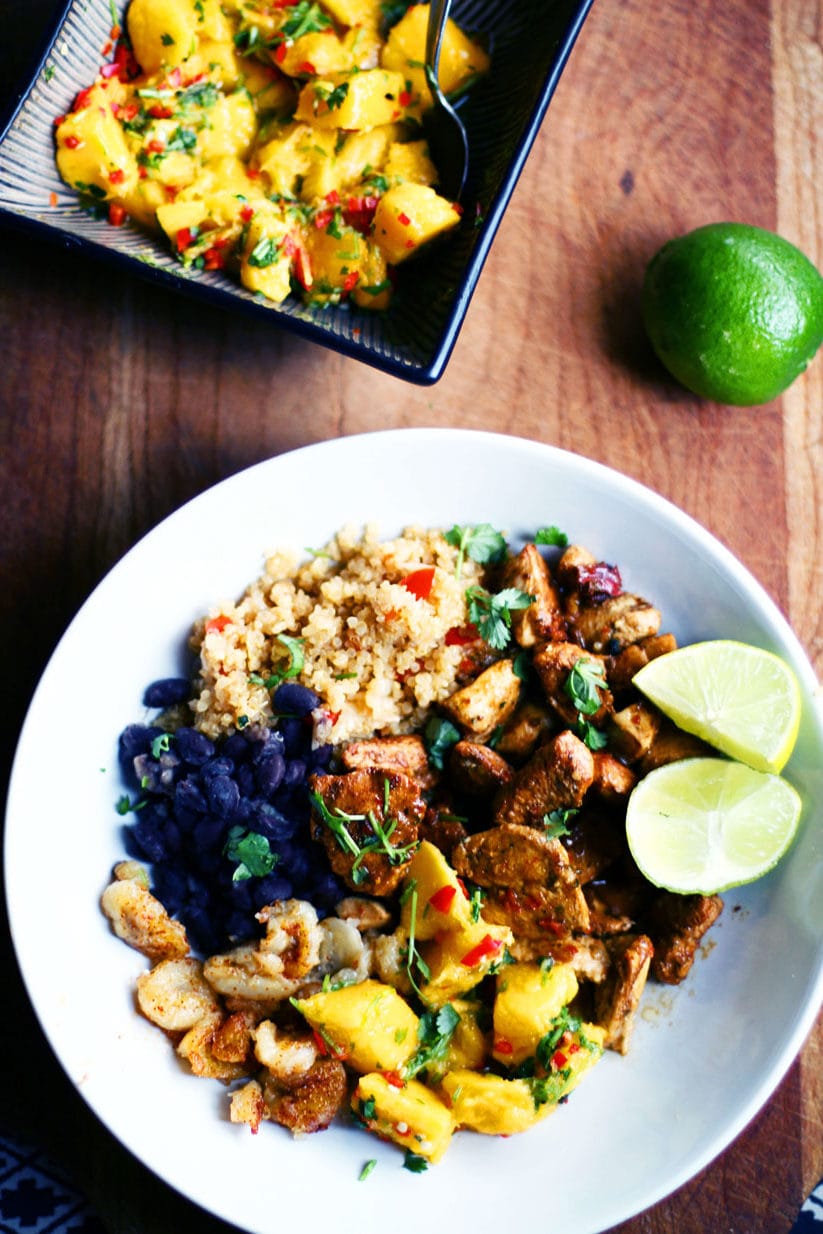 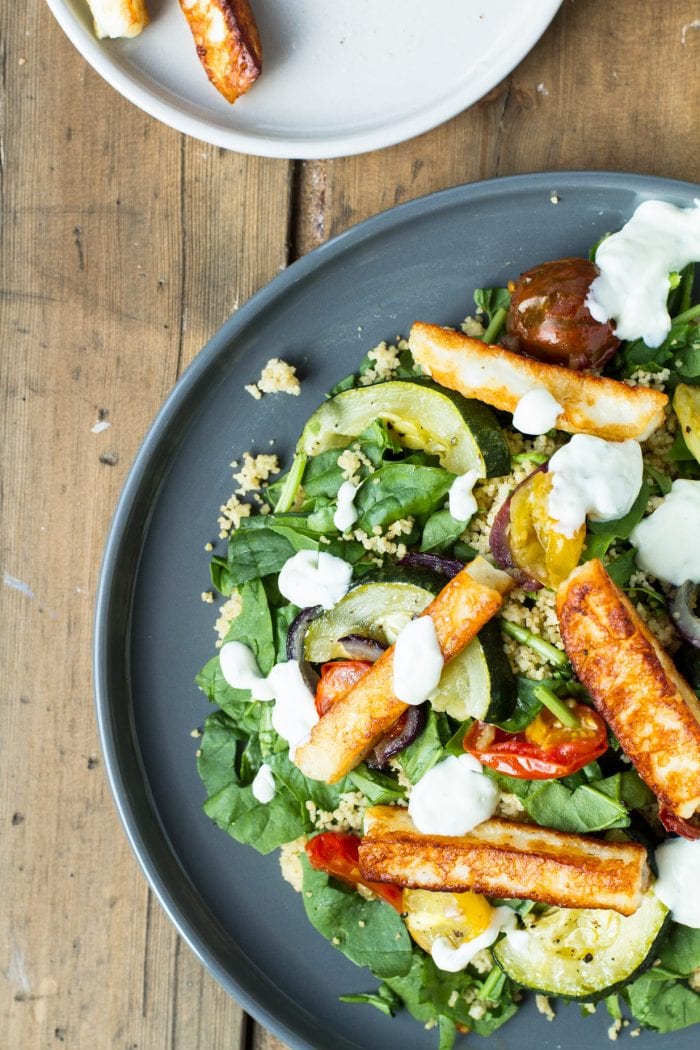 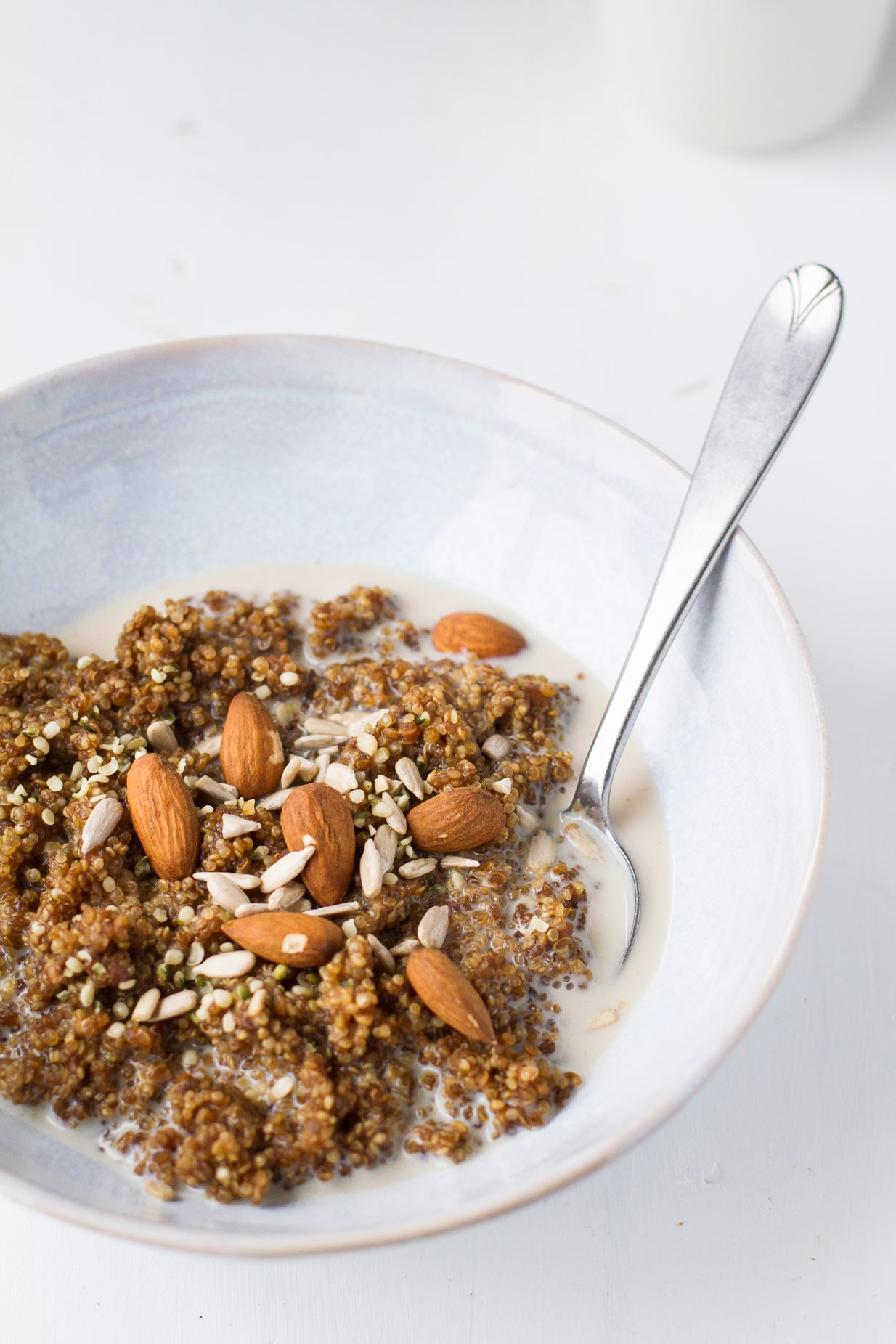 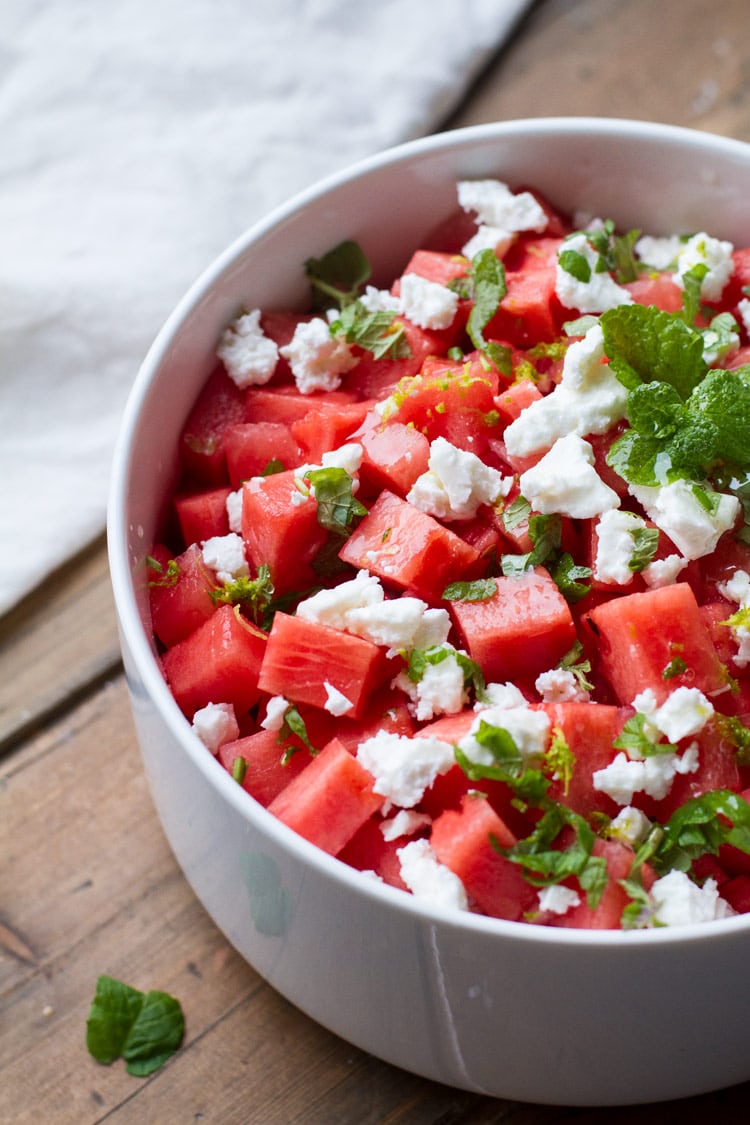 I hope you'll like it! Please tell me what you thought of this recipe, either in the comment section below or tag me @thegingerwithspice on Instagram. And don't forget to Pin it for later.

This recipe was originally published on Nov 20th 2017, but updated on Aug 26th 2019 for better photos and content.

Tabbouleh usually has finely chopped vegetables, but I find that I like the chunks from the tomatoes and cucumber. You may chop them however you like. Tabbouleh or tabouli salad doesn’t necessarily need to be served with Middle Eastern food. It is a citrusy, herby and fresh quinoa salad that works with almost anything!

What a perfect side to my bbq this was, thank you so much for sharing this refreshing recipe. Will be making it again and again.

I'm so glad you liked it, Ramona!

This was the perfect solution for my cookout last weekend, I always have so much parsley and never know how to use it and this was absolutely delicious. Fresh and filling and full of flavor, I'm going to make more since it all got eaten!

I'm so happy the tabbouleh turned out great! It is a very easy way to use up all that delicious parsley too. Thank you for getting back to me!

What a perfect summer salad! I love all those fresh herbs. It gives this salad such a summery feel, and it’s so simple to make. Thanks for sharing!

I can never get enough fresh herbs. Thank you!

I love tabbouleh but I've never made it at home. Can't wait to give it a try!

It's so simple, and definitely worth it! Enjoy!

I absolutely love tabbouleh! This is one of my favorite dishes to enjoy with some hummus and pita for a filling and fresh meal. Your version looks spectacular!

Thank you, Jenni, and I couldn't agree more!