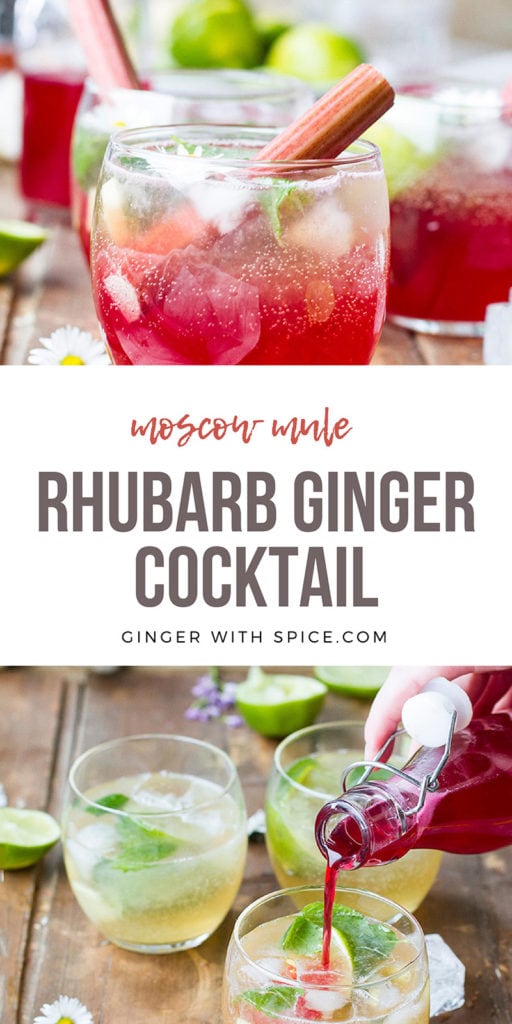 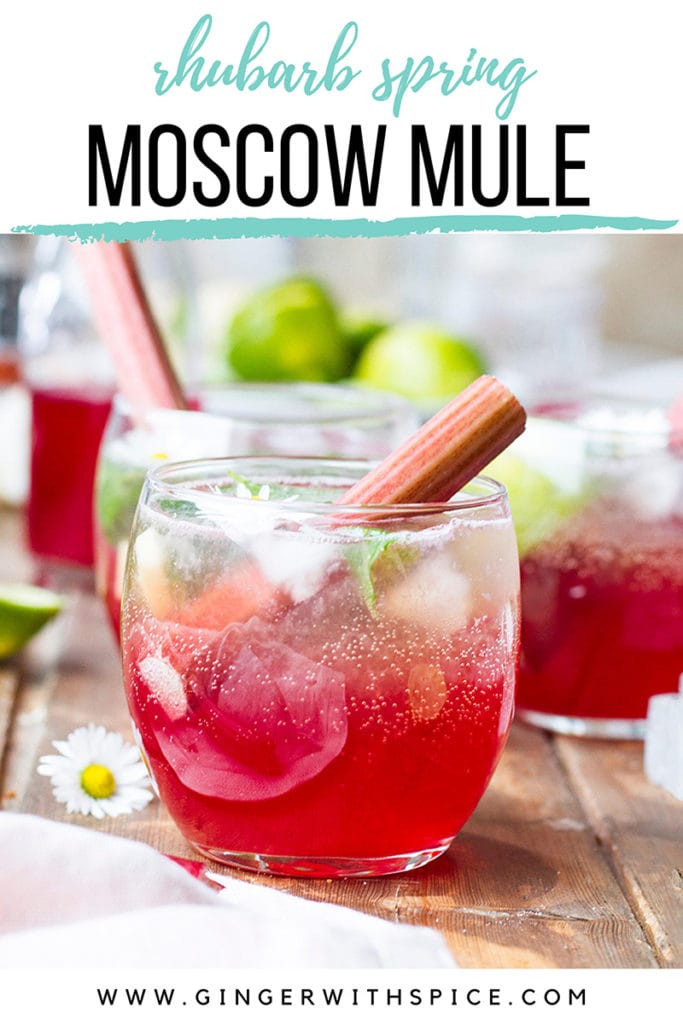 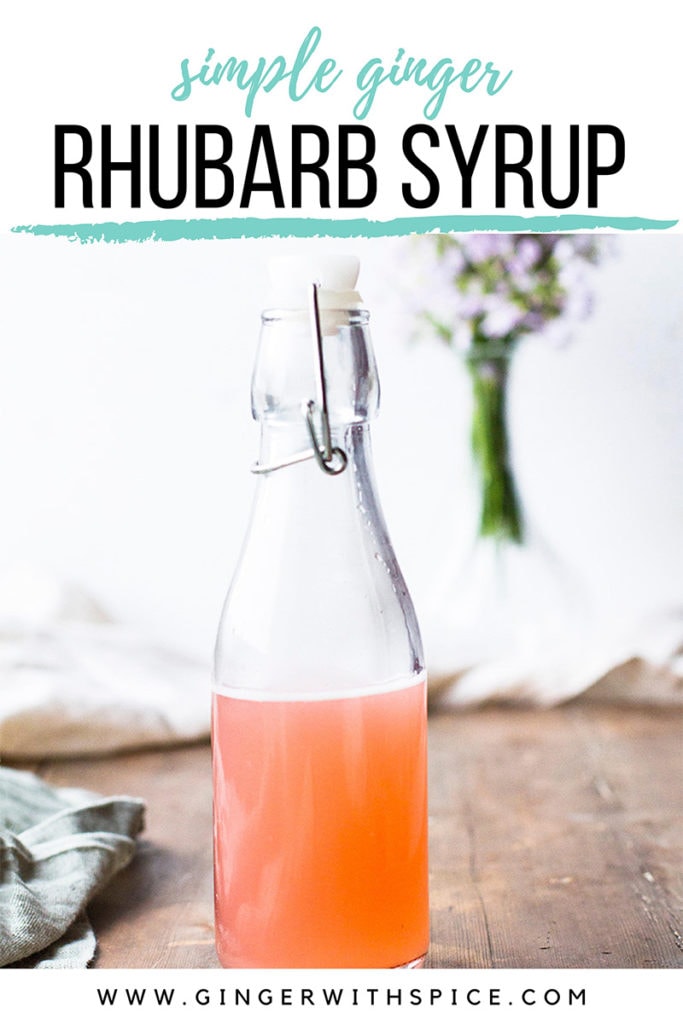 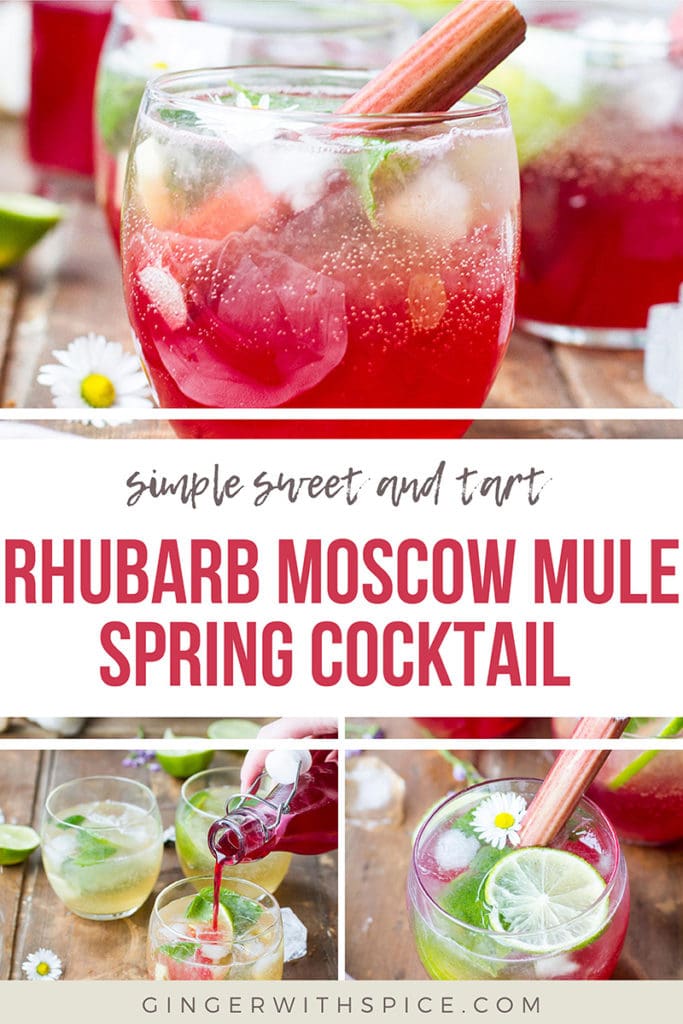 Rhubarb Moscow Mule Cocktail is the perfect combination of sweet and tart, spicy and fresh. The ginger rhubarb simple syrup is sweet and tart, fresh ginger and bubbly ginger beer are spicy, and who would I be without extra fresh mint to balance out this beautiful cocktail? 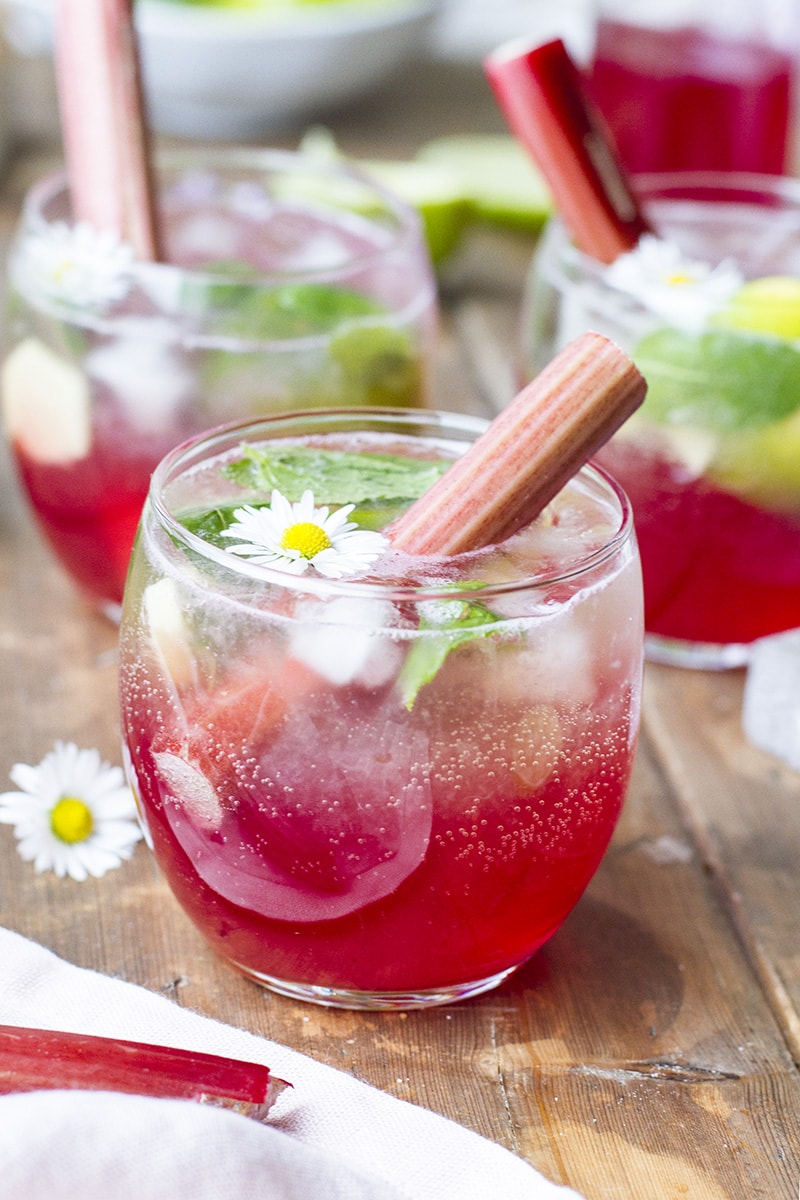 And for the hottest of summers, I highly recommend making one of these 6 frozen cocktail popsicles!

Table of Contents show
1. What is a Moscow mule and do we need copper mugs?
2. Why is it called Moscow Mule?
3. Classic Moscow mule recipe
4. Ginger rhubarb simple syrup
5. About the color
6. Rhubarb cocktails
7. How to make it
8. Did you like this rhubarb cocktail? Here's more cocktails I think you will like:
9. Rhubarb Moscow Mule Cocktail
9.1. Ginger Rhubarb Simple Syrup
9.2. Rhubarb Moscow Mule Cocktail
9.3. Did you make this recipe?

What is a Moscow mule and do we need copper mugs?

A Moscow mule is a cocktail consisting of lime juice, vodka and ginger beer. It is traditionally served in a copper mug, because copper is a great thermal conductor so the chilled drink will stay cool.

This way the cocktail will give you a chilled sensation when you sip it. Some also claim that the cold copper intensifies the fizziness of the ginger beer, but I have not experienced that. 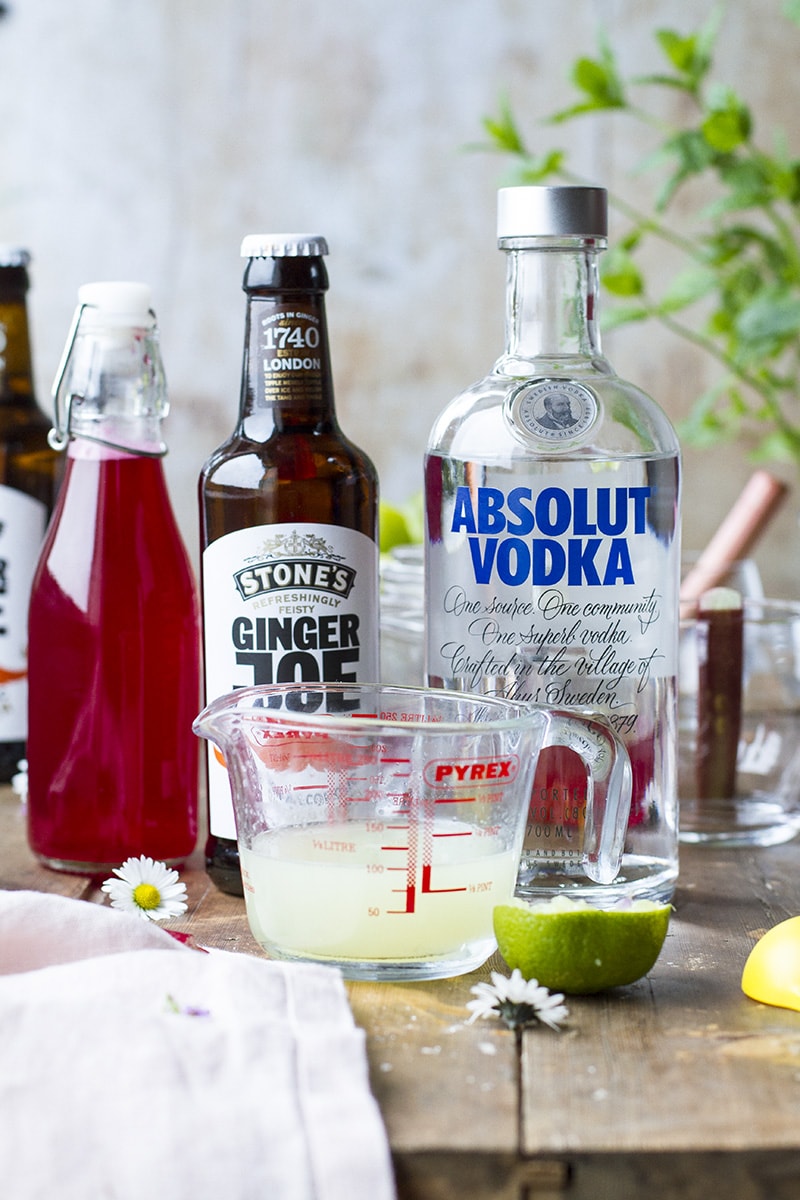 They say that the Moscow Mule was invented by the bar owner Jack Morgan in 1941, or at least helped develop it. According to cocktail historian Ted Haigh, Jack Morgan had a girlfriend who owned a copper-making company.

So it just made sense, I guess, to use the resources they had. You can read more about the history of the Moscow mule here. 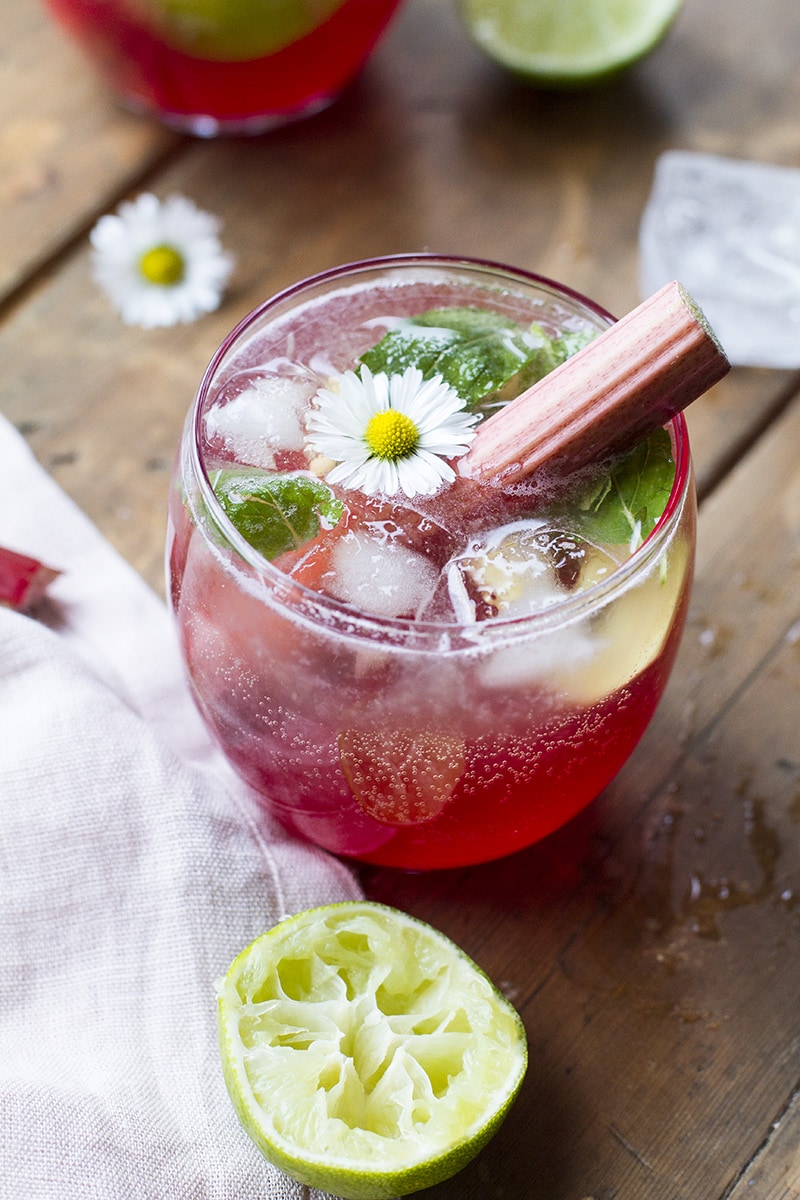 I don't have copper mugs, and I also found I'm tired of all the copper mug photos so I thought I'd just share it this way instead. You absolutely do not need copper mugs to make a delicious Moscow mule cocktail. Most other cocktails are served cold but in regular glasses anyway so you don't have to feel the need to purchase them.

Why is it called Moscow Mule?

It is called a Moscow Mule because Americans tended to associate vodka with Russia (hence the White Russian cocktail's name as well). Vodka wasn't a popular drink in the US in the 1940s and Americans joked about it being a Russian drink.

Apparently, the Mule comes from the fact that ginger is so spicy it gives a kick to the drink. I think that is just hilarious. 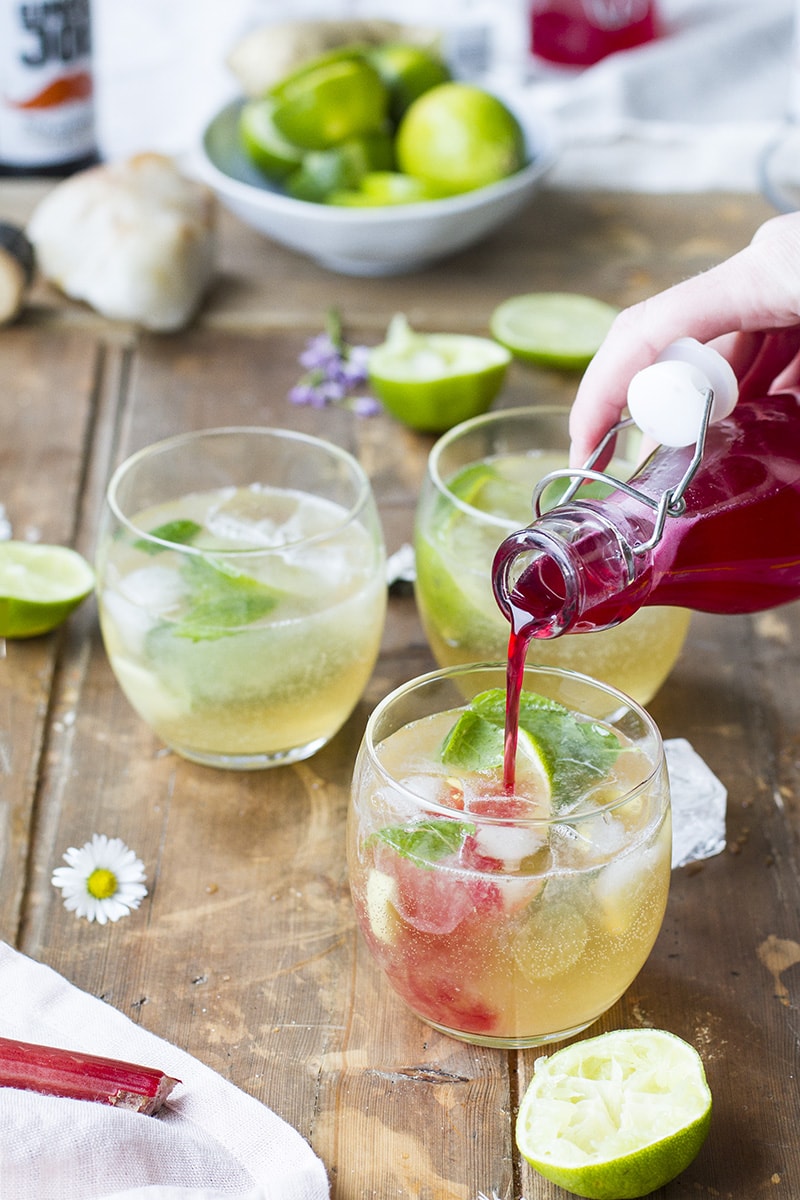 As mentioned, a classic Moscow mule only has lime juice, vodka and ginger beer. Simply leave out the rest of the ingredients if you want to make it classic style! It is a popular cocktail for a reason, but I definitely prefer a little extra zing from the rhubarb and fresh ginger. 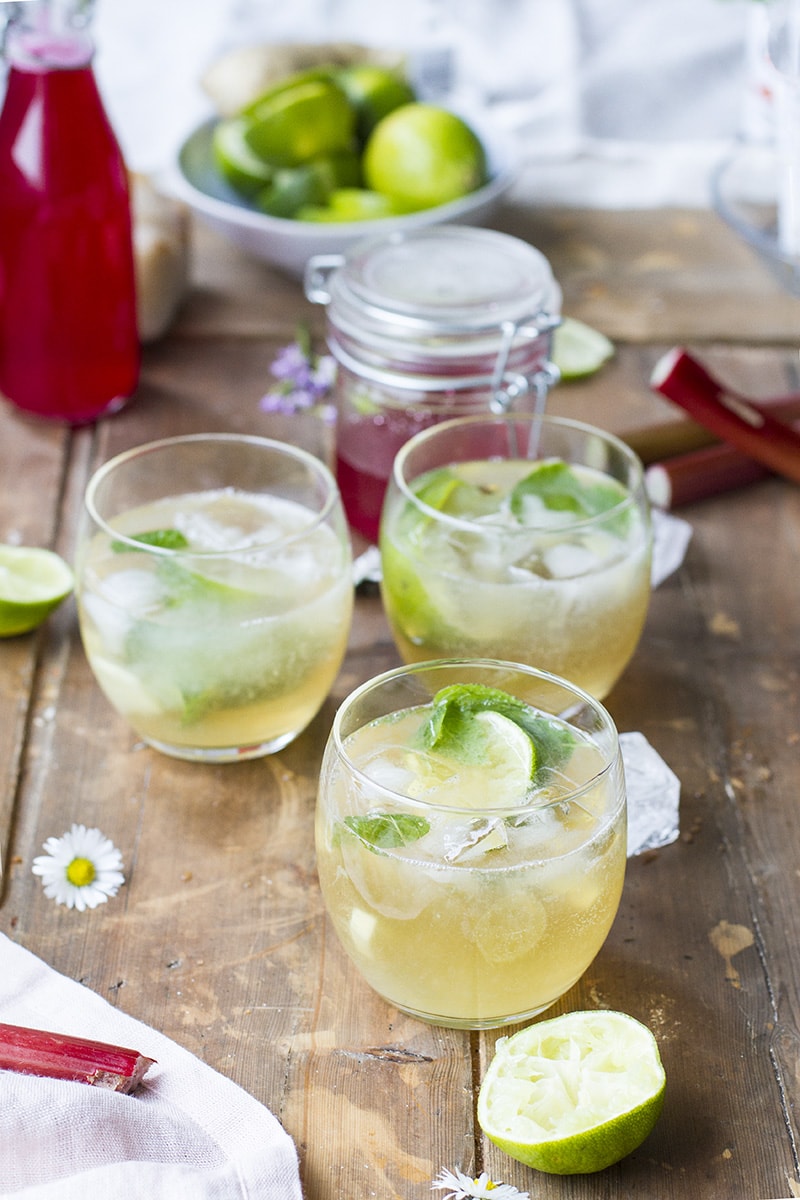 The thing that makes this Moscow mule a rhubarb Moscow mule, is this ginger rhubarb simple syrup. It is a great way to preserve the flavor of rhubarb and spring just a little while longer, as it will last about a month in the refrigerator (but it could also be frozen!).

Chop rhubarb into smaller pieces, and combine with all the other ingredients in a small saucepan. Let it boil for 10 minutes, then strain it into a clean bottle or jar. If you want to intesify the rhubarb ginger flavor, you can let the mixture cool completely before straining it. I highly recommend that!

And if you want to try another version of Moscow Mule, you could also try swapping this rhubarb syrup out with elderflower cordial for a more floral and delicate cocktail! 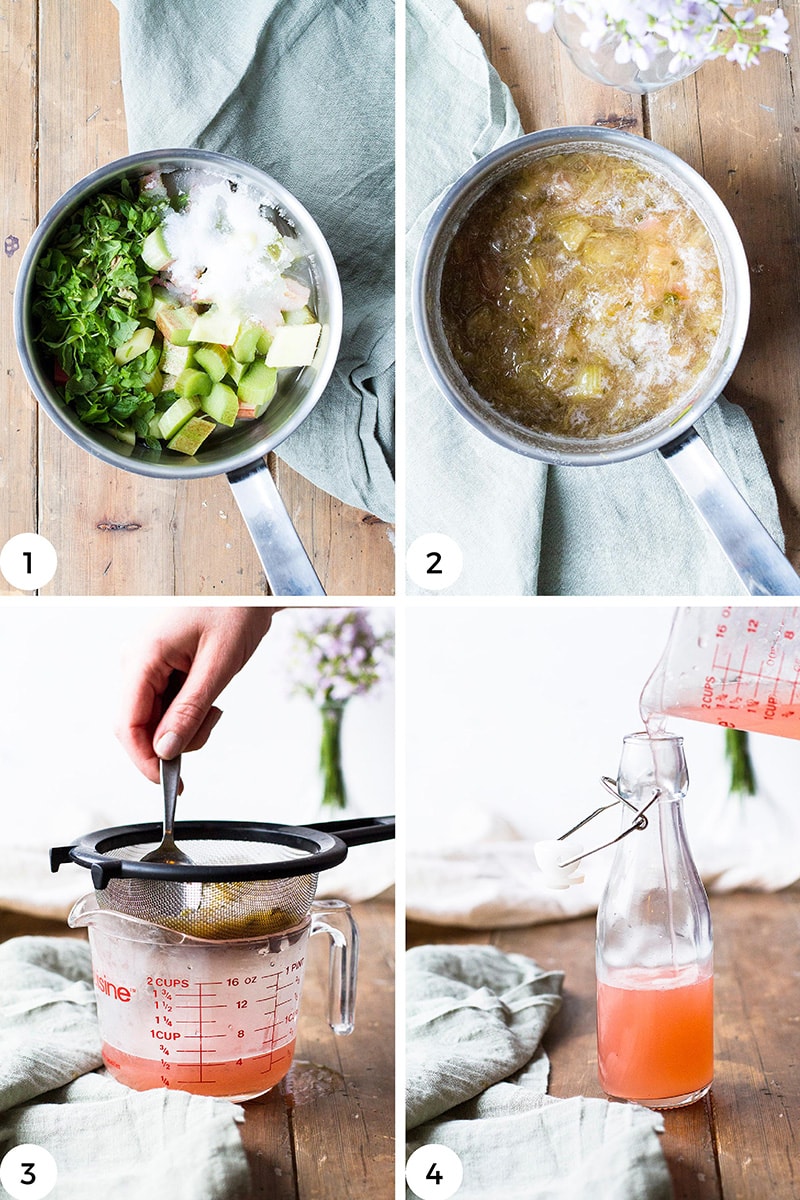 Depending a little on your rhubarb, this simple syrup can turn mushy green-brown or pink. My turns mushy, but I add just a tad food coloring to bring it back to delicious-looking. The green-brown color won't affect the flavor naturally, but we also drink with our eyes, don't you think? 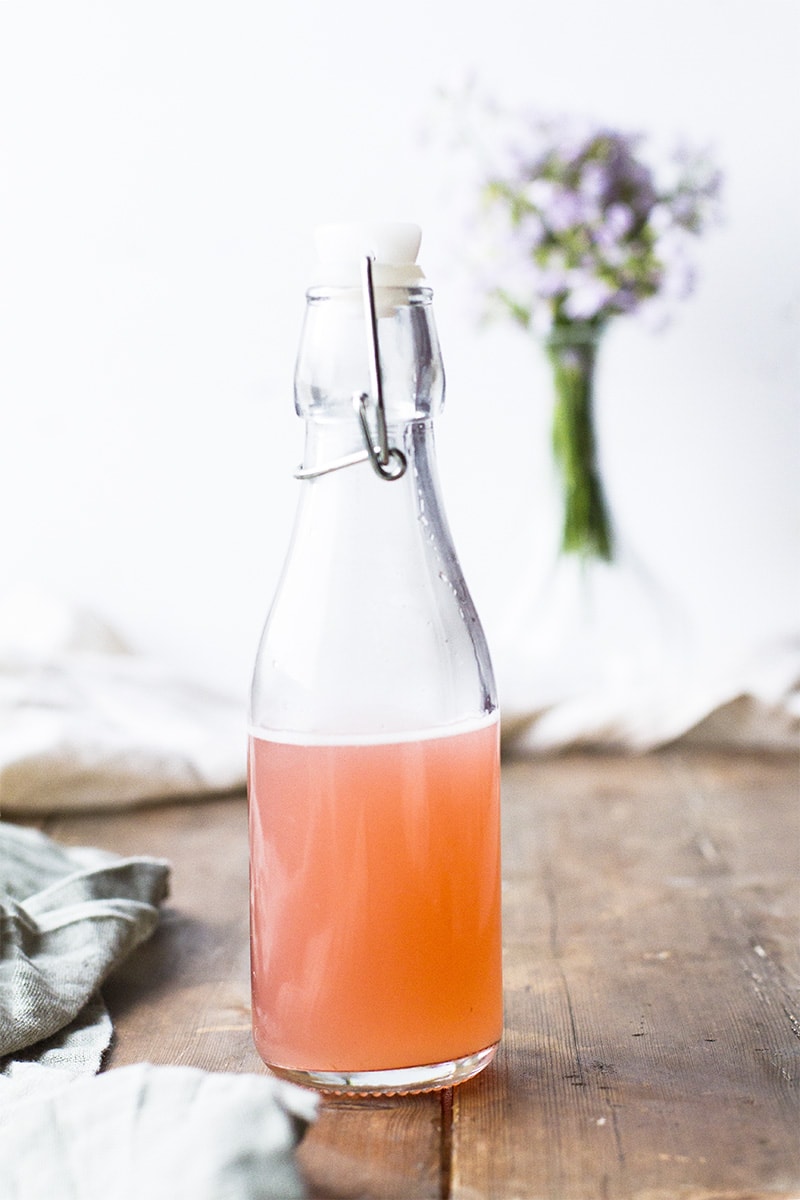 This simple syrup can be used in a myriad of different ways. You can switch out the apricot rosemary simple syrup in this gin fizz, or add a little to my classic mojito, or you can puree the simple syrup with the rhubarb and add to a bellini (doesn't that sound delicious?). Another recipe that could work is to swap out the blackberry syrup for rhubarb syrup in this martini.

Adding a splash to a grapefruit mimosa, whiskey sour or cucumber pomegranate vodka lemonade also sounds delicious, although I haven't tried it. It is a simple syrup that could be used to most fresh things. 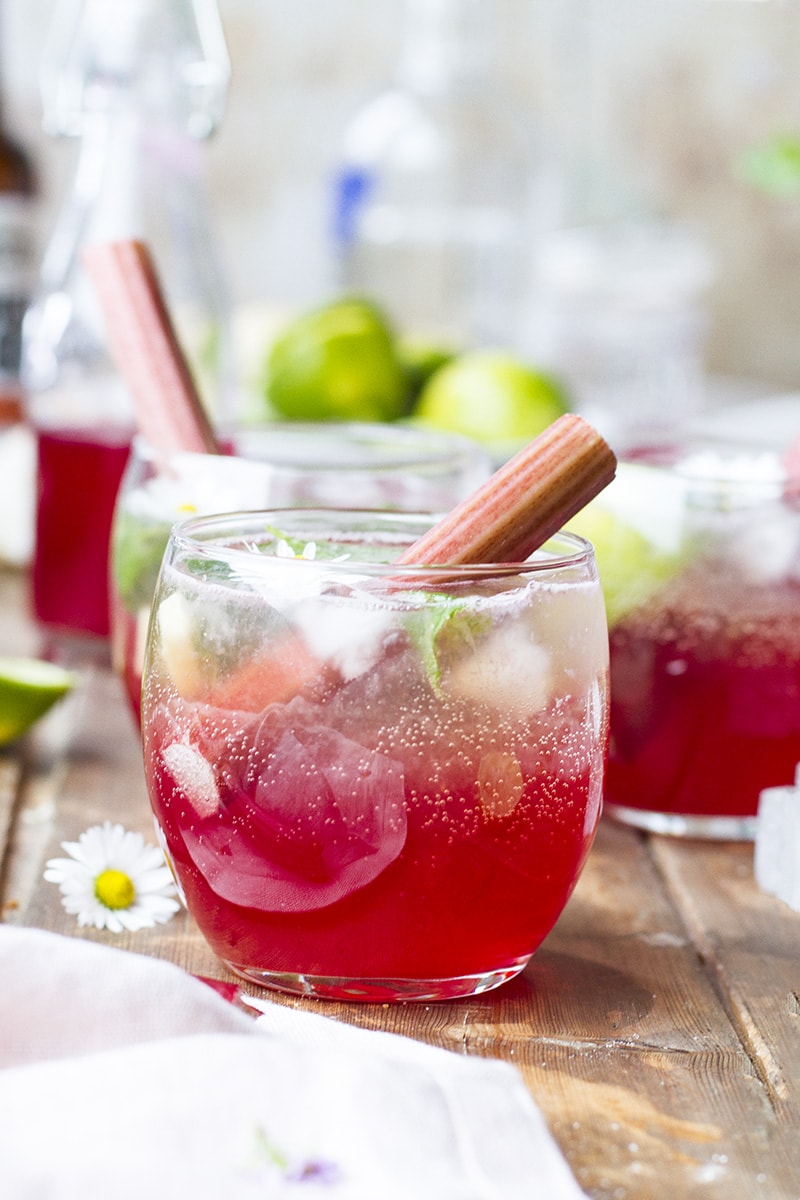 I unfortunately don't have any more rhubarb cocktails recipes, but it is on my agenda. In the meanwhile, you can try the above versions of my other cocktails, or you could try rhubarb mojito, sparkling rhubarb margarita or rhubarb pisco sour! And as mentioned, you can probably use the ginger rhubarb simple syrup in these drinks as well.

How to make it

In a glass (or copper mug), squeeze half a lime and add the squeezed lime, fresh ginger and mint leaves. Muddle to release the juices of the ginger and mint. Fill the glass with ice and then pour over vodka, ginger beer and the ginger rhubarb simple syrup. Give it a stir and garnish with more lime, mint and a stalk of rhubarb. 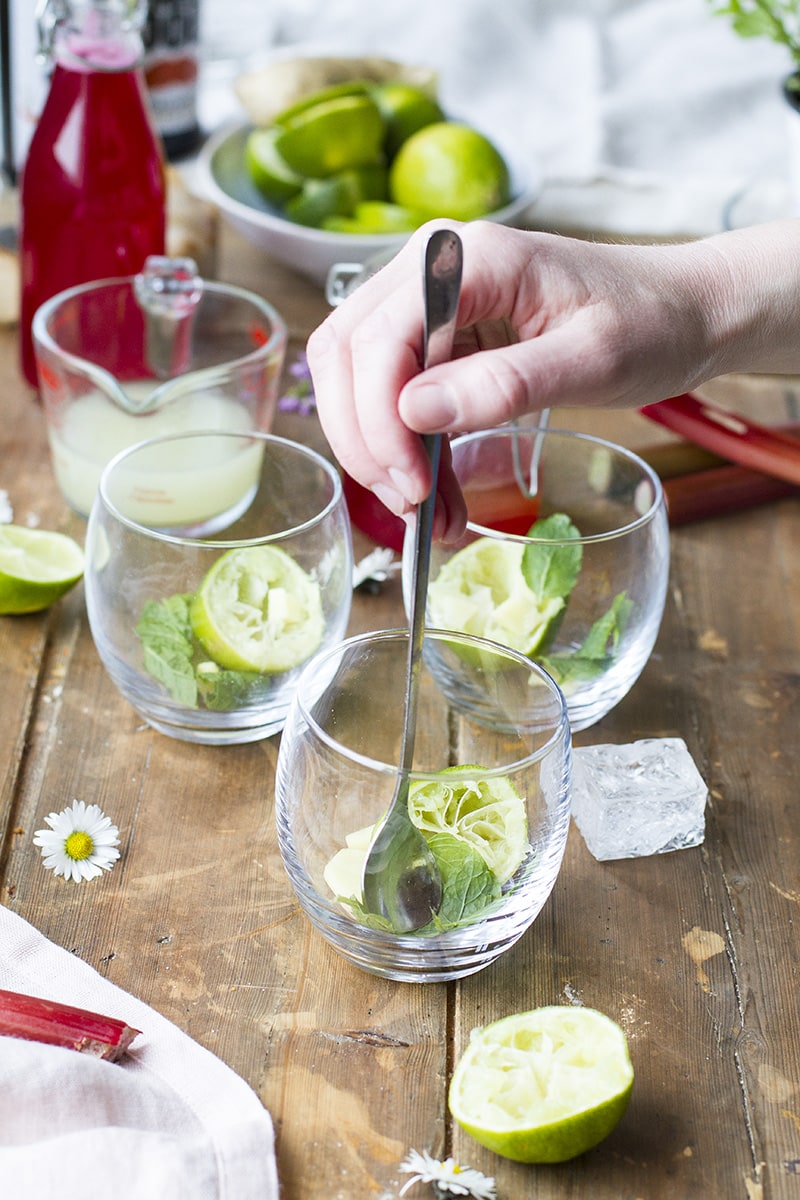 Any ginger beer will work, both non-alcoholic and alcoholic. Just make sure you use one you personally like. I love to use a spicy Jamaican ginger beer, and you could even make your own. Come to think of it, I need to make a recipe for that so stay tuned! 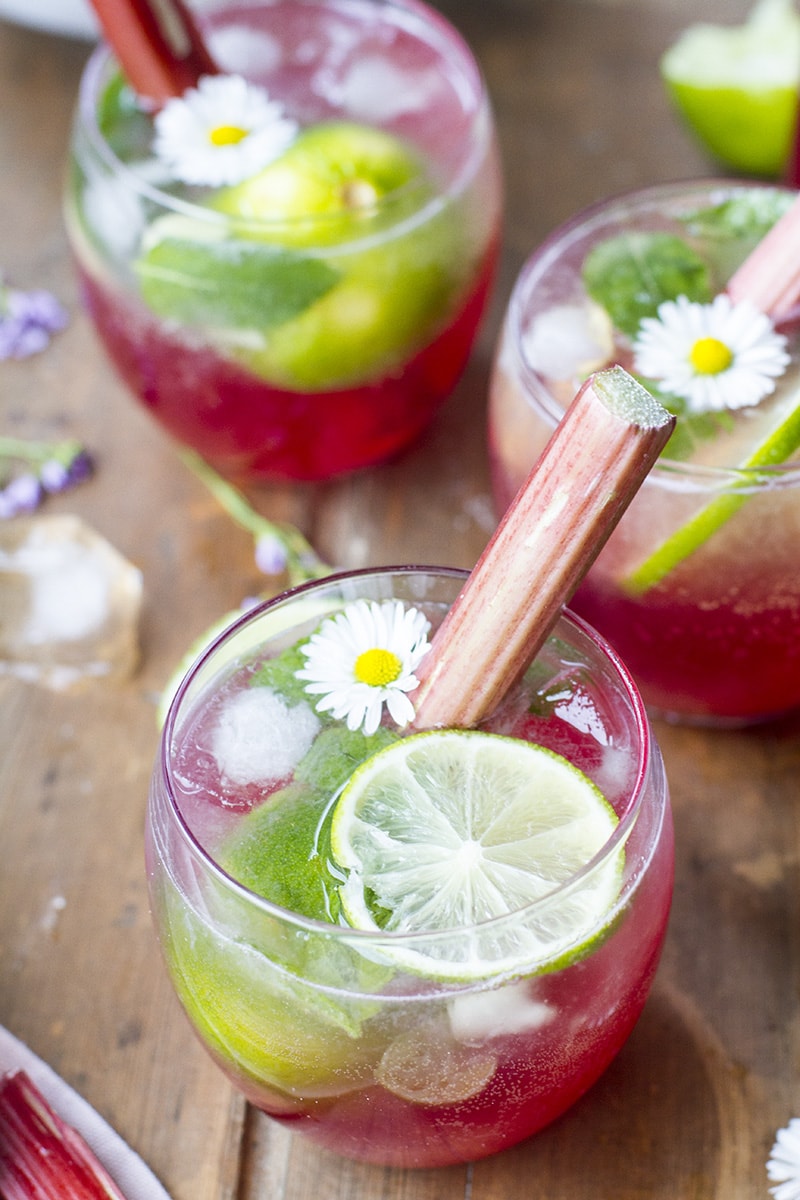 * Depending a little on your rhubarb, this simple syrup can turn mushy green-brown or pink. My turns mushy, but I add just a tad food coloring to bring it back to delicious-looking.