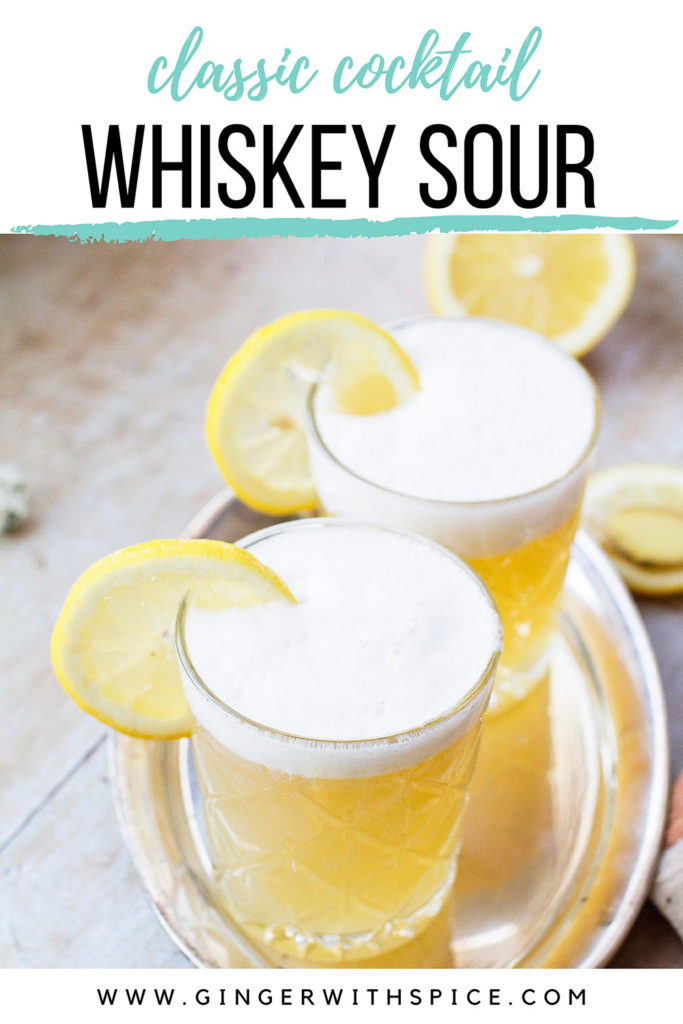 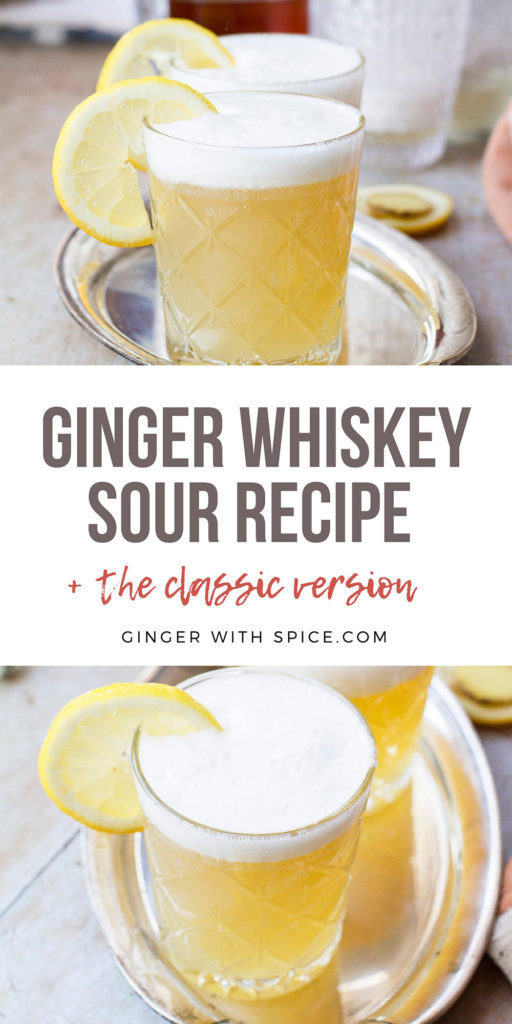 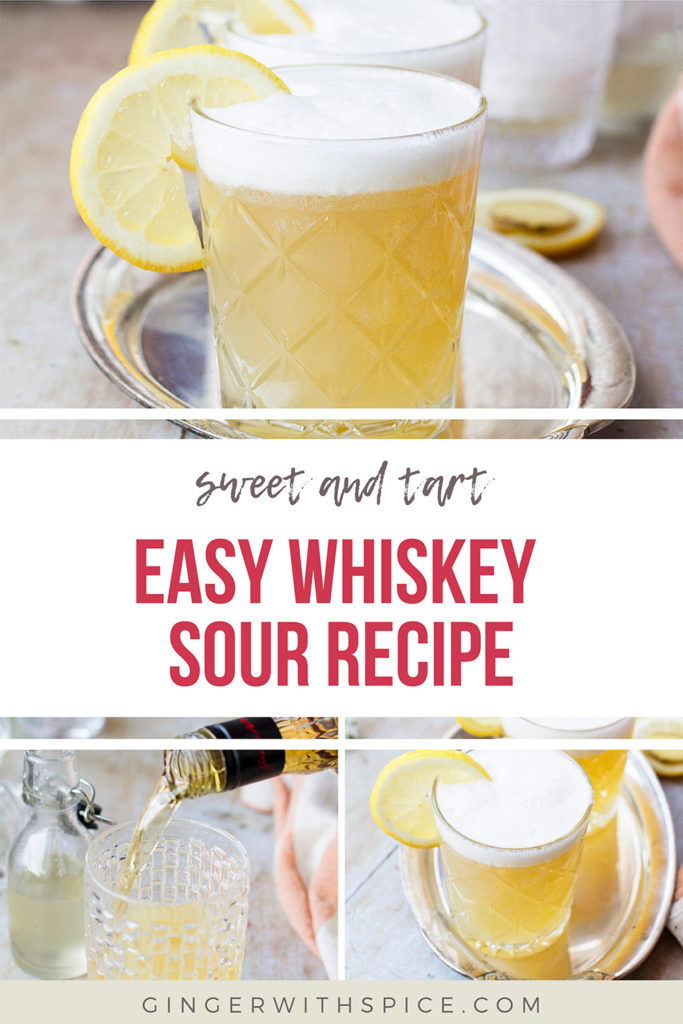 The Whiskey Sour - a classic cocktail that is extremely easy to make. It's just got a few ingredients, but it's got all a good cocktail could ask for: it's sweet, it's sour, and let's be honest; it's kind of strong. You can also really easily make this into a ginger whiskey sour! 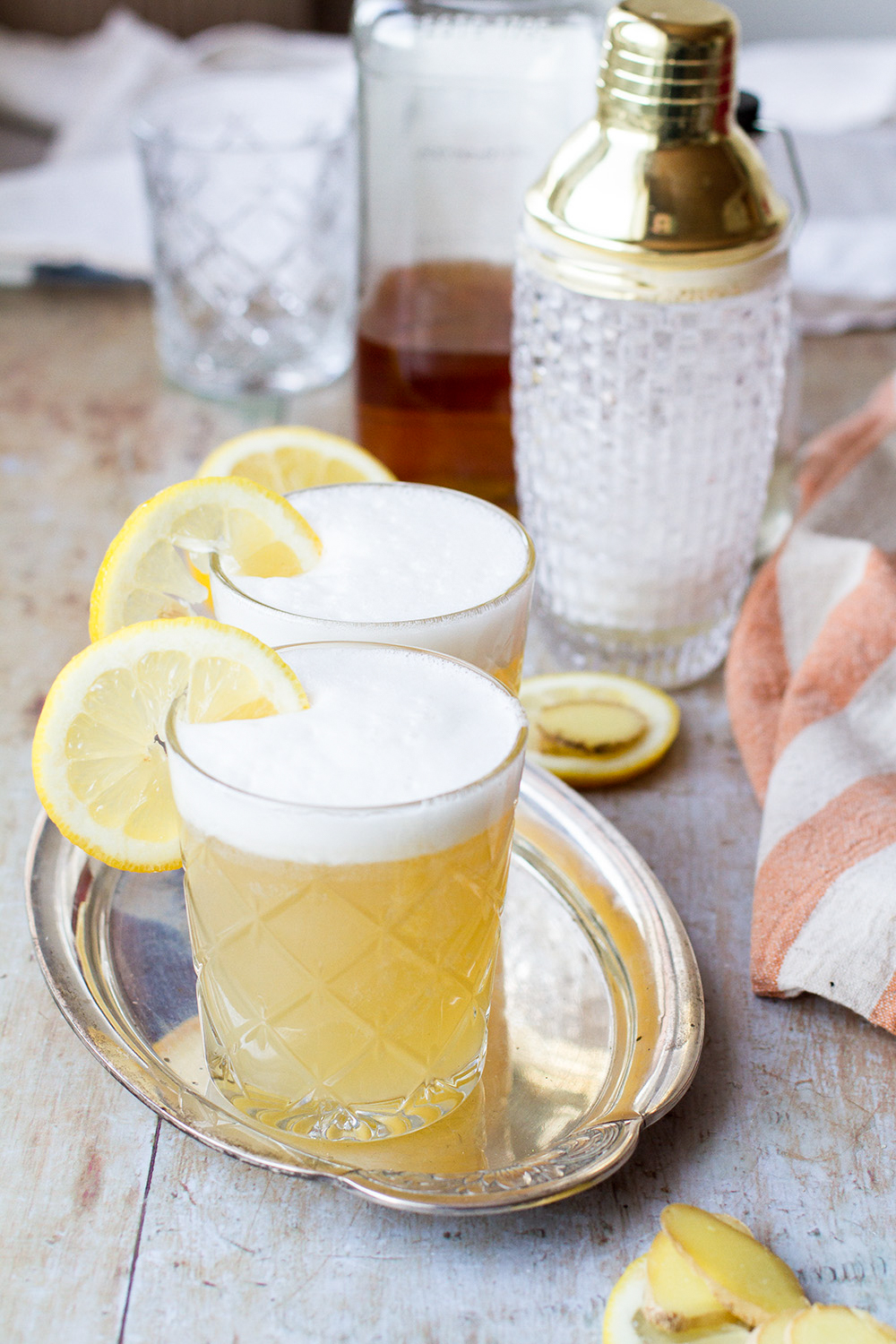 If you like this whiskey drink, you will also love this blackberry bourbon smash, the Penicillin cocktail, Irish coffee, or any one of the other 11 refreshing whiskey cocktails in this round-up.

Some other classic cocktails I recommend are mojito, gin fizz, and vodka lemonade. There's always a drink for any occasion here at Ginger with Spice.

Table of Contents show
1. What is a Whiskey Sour and why is it called that?
2. Why do we have egg whites in cocktails?
3. Vegan Whiskey Sour
4. Whiskey Sour Variations
5. I want to make it a Ginger Whiskey Sour
6. What is the best whiskey to use?
7. How to make a whiskey sour from scratch
8. More delicious summer cocktails:
9. Classic Whiskey Sour
9.1. Did you make this recipe?

What is a Whiskey Sour and why is it called that?

A whiskey sour is called just that because it is a whiskey-based drink that happens to be sour. A classic whiskey sour is made with whiskey, lemon juice, simple syrup, and egg whites. It's one of my favorite drinks because of the sweet and sour combination. 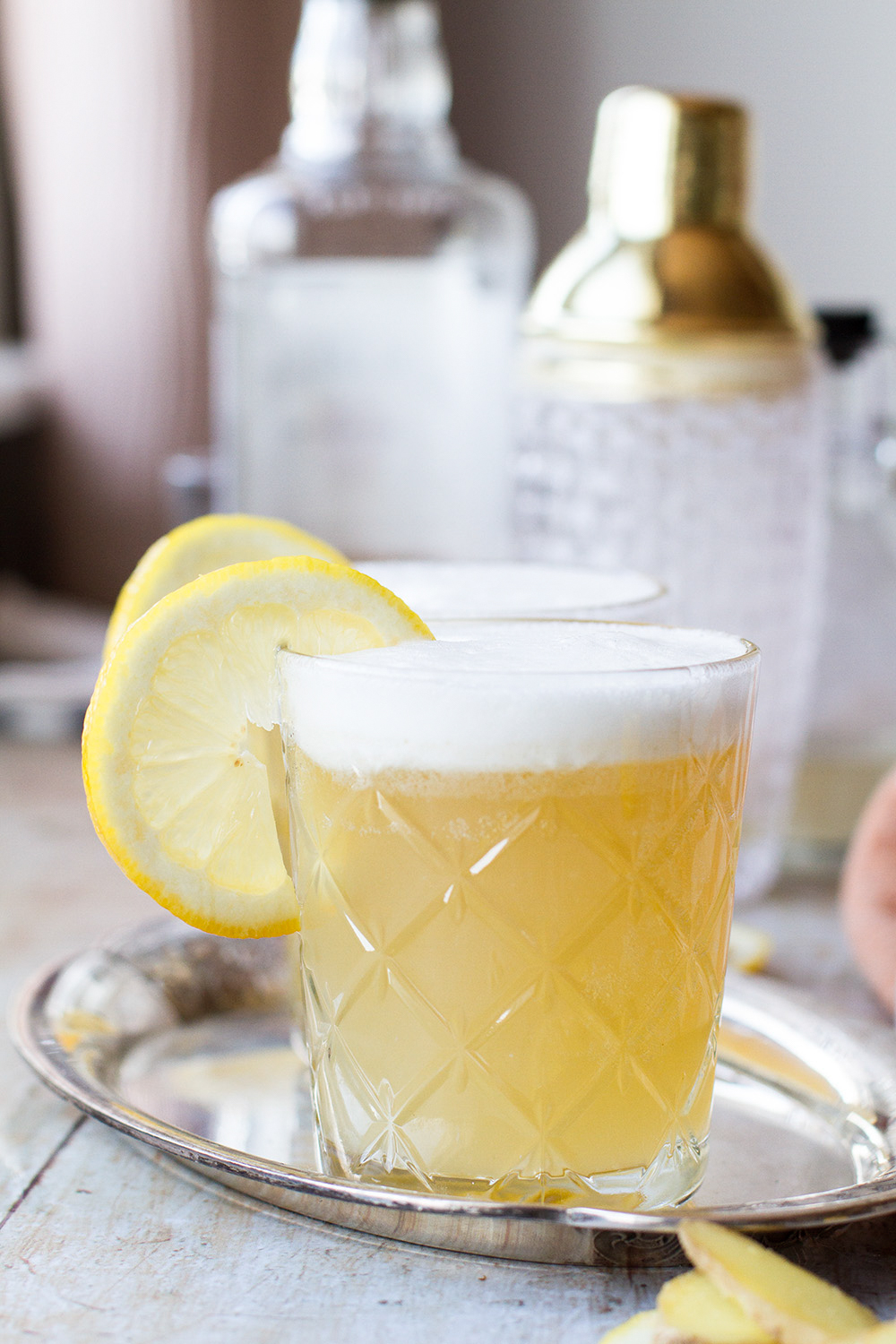 And before you ask; no, I do not consider a whiskey sour a 'girly drink', because if a drink is tasty, it should be tasty for both genders - don't you think? A manly man can order a piña colada or a mojito and not feel awkward about it.

The whiskey sour is a very old drink. First written down in 1862 in The Bartender's Guide by Jerry Thomas. It was, however, known for a century before this. When sailors ventured overseas, they struggled with malnutrition and scurvy and germs and whatnot.

Citrus is great to prevent scurvy, and whiskey (or rum) was safe to drink as opposed to dirty water.

In a way, that was how the whiskey sour got its origin. Read more about this from The Alcohol Professor. 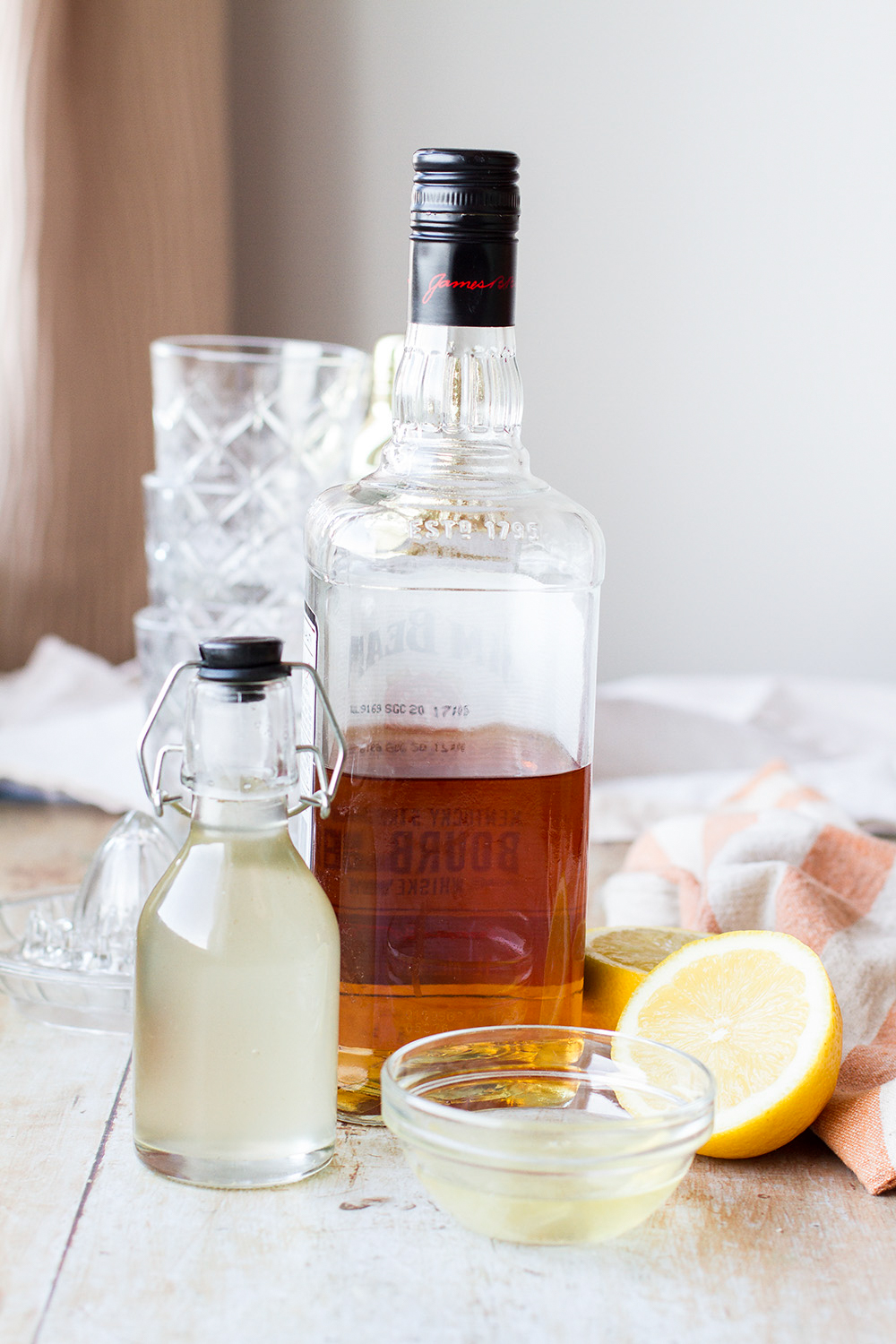 Why do we have egg whites in cocktails?

The egg white helps to reduce the acidity of the lemon, and it also binds the flavors together. The cocktail will get a little cloudy and get a lovely foam on top.

I know a lot of people freak out when they see the recipe and it calls for raw egg whites - let me tell you, you cannot taste it! It's completely flavorless. The egg white gives a pretty white foam and it can be omitted if you want to.

But if it is solely for the "Oh but I don't like eggs" - then that excuse won't work.

However, it may taste a little off if the drink sits for too long. So if you're not planning on drinking it right away, I would also omit it. And 1 egg white will be enough for two drinks, so you don't have to multiply that when making several drinks at once. But you can, of course! 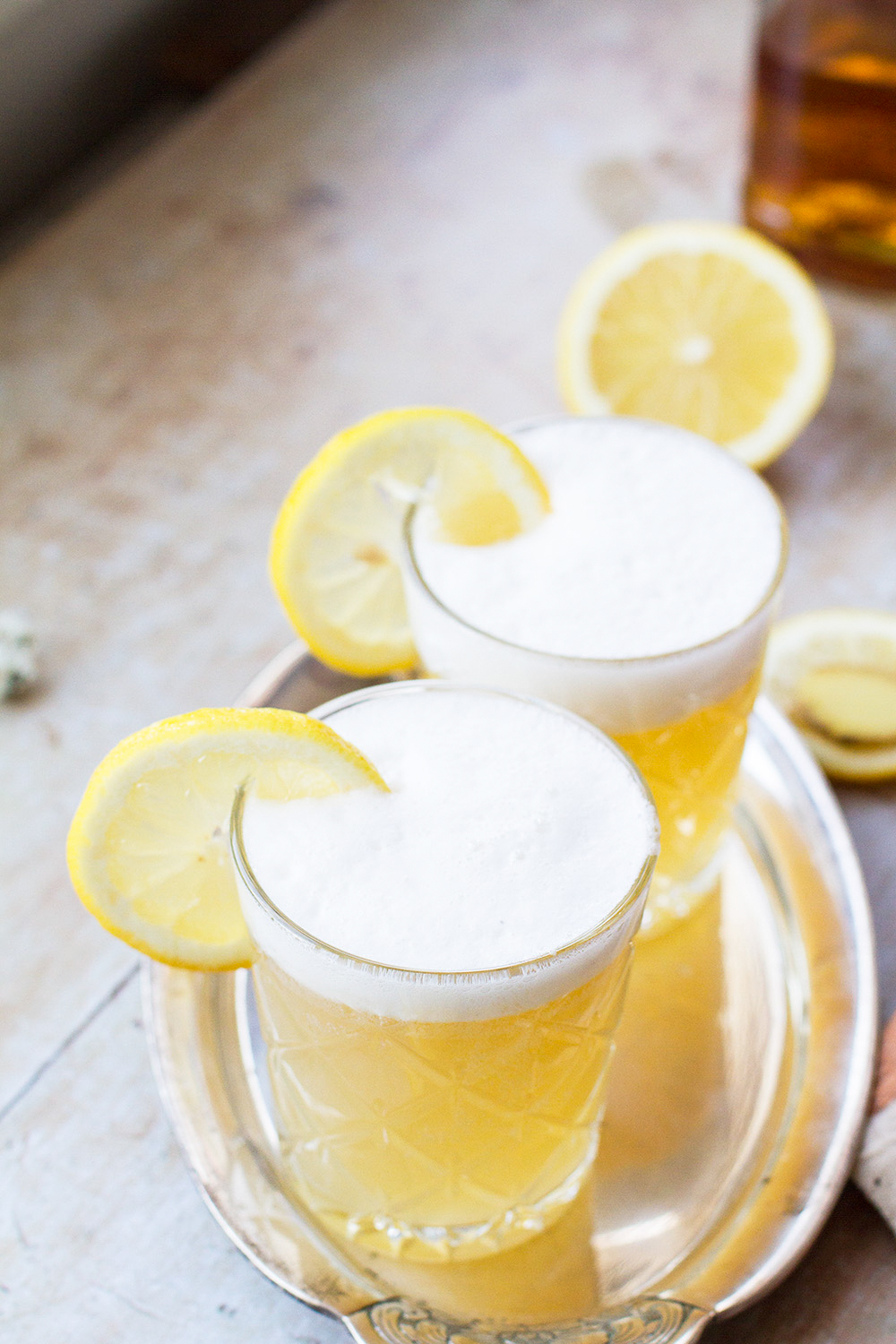 I know salmonella could be a valid excuse, but this shouldn't be an issue if you use pasteurized eggs. However, if you're vegan, then that's a good excuse. Vegans may use the liquid from a can of chickpeas instead, known as the aquafaba.

I have not tasted this, so I cannot vouch for the taste, although aquafaba is considered tasteless. Therefore I think it's worth a shot!

1 egg white is approximately 1-2 tablespoon aquafaba. Use the same way as egg white in this recipe.

A whiskey sour is a perfect cocktail to experiment with different flavors. Instead of the simple syrup in this recipe, you can add equal amounts: 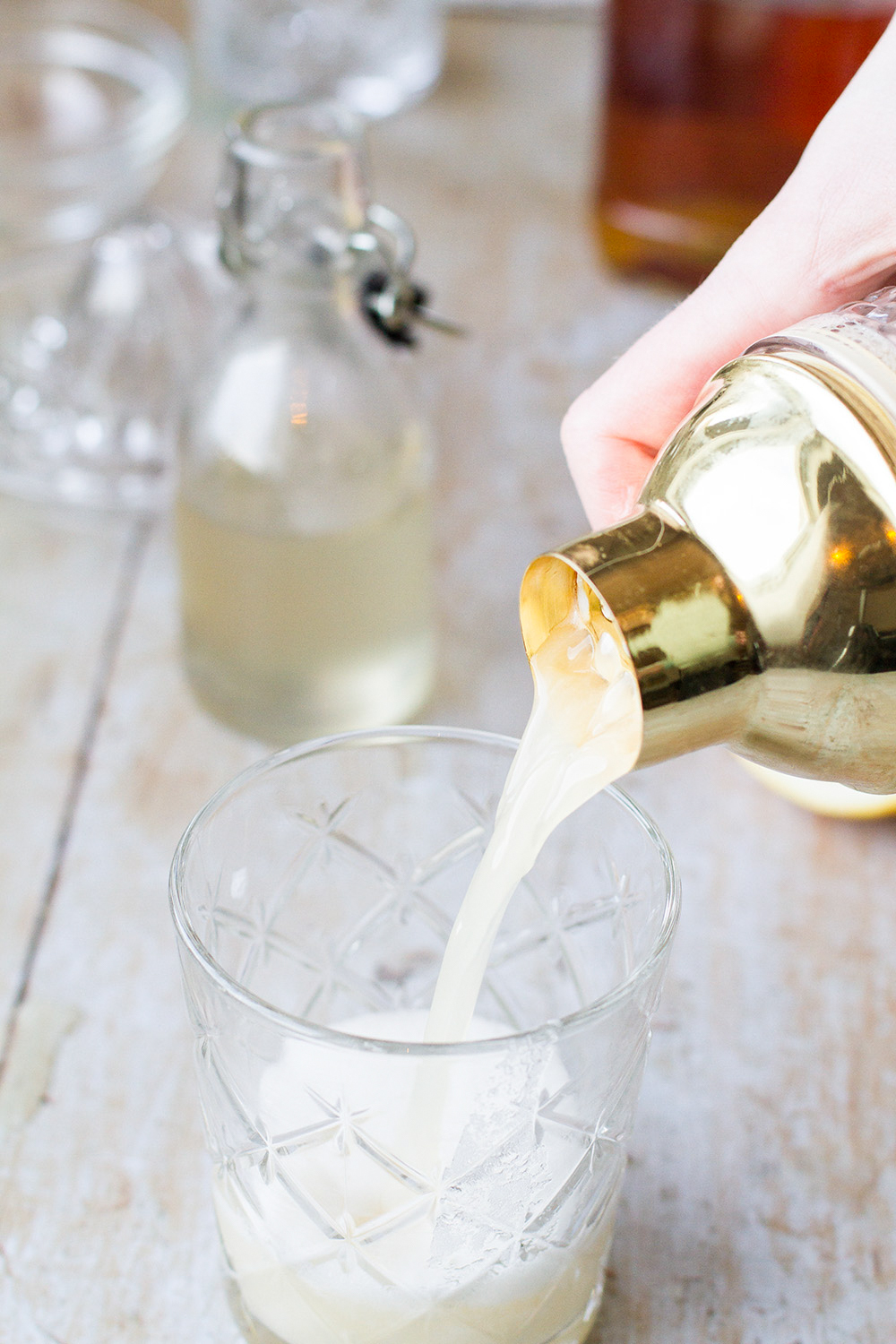 I want to make it a Ginger Whiskey Sour

For example, you may add ½ cup water and ½ cup sugar into a saucepan, along with 1-inch ginger roughly chopped. Stir until sugar is dissolved and let it simmer for about 15 minutes. Let it cool to room temperature with the ginger still in it, this infuses the simple syrup with delicious ginger.

You can do this with any thinkable flavor. I've used rhubarb stalks, apricot, rosemary, and so many other things. Ginger is also a classic, so I'm putting it here as an option for you. 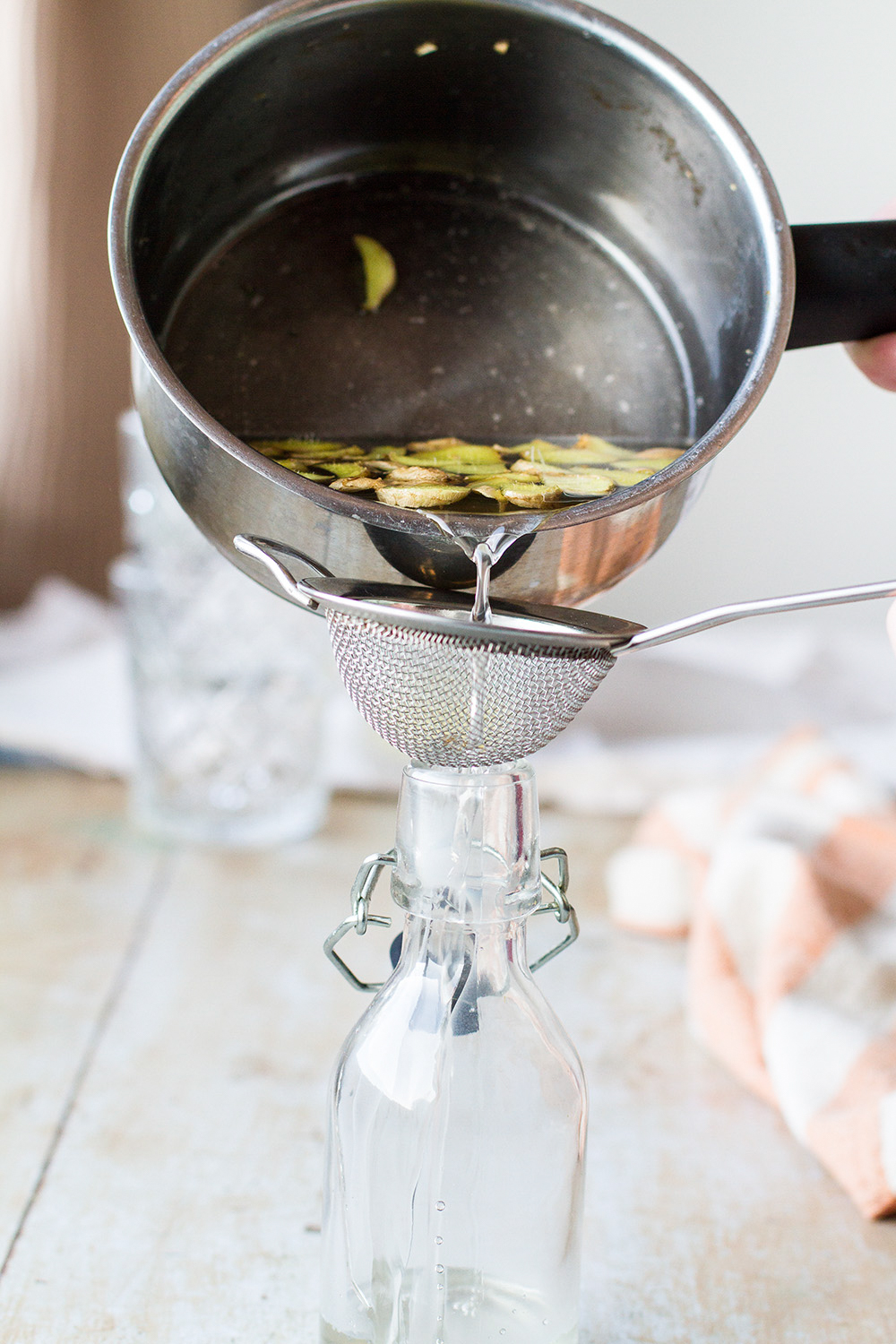 What is the best whiskey to use?

You can use bourbon or rye for this recipe. I prefer bourbon, like a Jim Beam Kentucky Bourbon, and I'm very happy about it. It's relatively cheap but also really delicious. I'm not sponsored for saying this, just trying to help in your decisions.

According to bartender Kenneth McCoy, bourbon is best because of the vanilla, honey, and caramel notes. Rye is spicier.

And if you want a cheap whiskey for your whiskey sour, check the test of 13 under $25 whiskeys here, and spoiler alert - some even get the grade A+!

How to make a whiskey sour from scratch

Place whiskey, lemon juice, simple syrup, and egg white in a cocktail shaker. Don't add in the ice just yet. Shake vigorously for 30 seconds. This will incorporate the egg white properly.

If you are making more than 1 drink, do not increase the number of egg whites, that is not necessary. 1 egg white will be enough for 2 drinks (but if you want you can double it too).

Add ice and shake again, for around 15 seconds more, to chill the drink. Strain into a glass using a fine-mesh sieve. Garnish with a lemon slice and serve!

Serve immediately with a slice of lemon, and a maraschino cherry if you feel like it, as that's the traditional way of serving it. I just have bad associations with these cherries, so I don't like them as decor. It's just me, not the cherry. 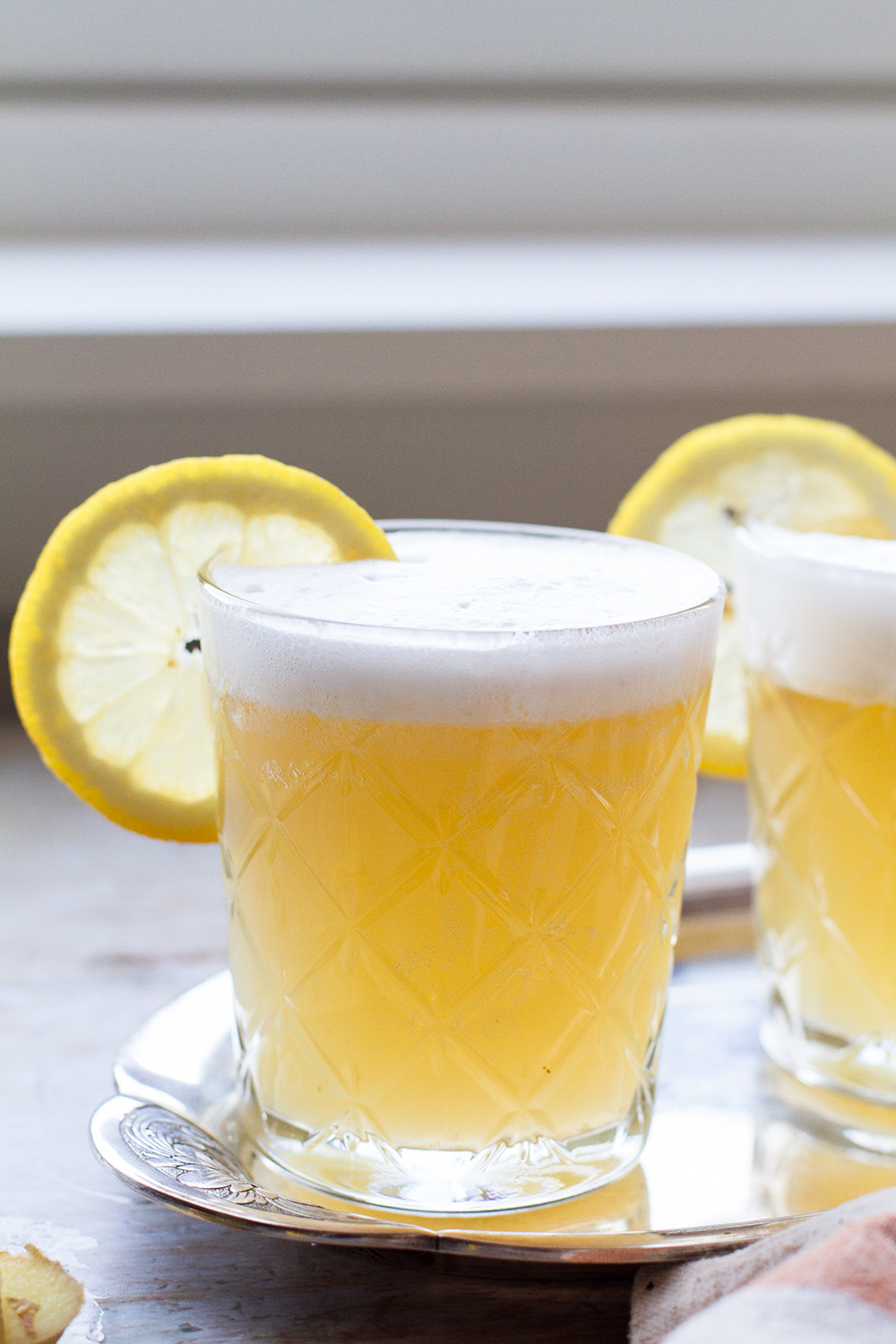 Scroll for a printable recipe card below! For another idea for St. Patrick's Day, why don't you try this golden Lucky Leprechaun drink!

I’d love to hear your thoughts. Comment below or tag me @thegingerwithspice on Instagram. And don’t forget to Pin it for later! To make sure you’re never missing another recipe, please feel free to subscribe to my newsletter. As thanks, you will receive a free e-cookbook Travels Through the Seasons, with many delicious recipes from around the world that suit different seasons of the year.

To keep the blog up and running this post may contain affiliate links, it will be at no extra cost to you, please read the disclosure for more information.

This recipe was originally published on July 4th, 2018, but updated on May 12th, 2021 for better content and photos.

* 1 egg white is enough for 2 drinks, so do not need to (but you can) multiply egg whites if you're making several drinks. Egg whites are flavorless. Pasteurized eggs are safe to consume raw. For vegan whiskey sour, omit egg white and use 1 tablespoon aquafaba (liquid for a can of chickpeas) the same way.

** Simple syrup is just equal parts water and sugar in a saucepan, stir and heat until hot enough for the sugar to dissolve. Should be cool for the drink to stay cool. To make it a ginger whiskey sour you can add 1 inch chopped ginger to your simple syrup and cook for 15 minutes, let cool before straining.

I can attest that aquafaba is also flavorless. I also feel that egg white begins to smell a bit off if you don't finish your cocktail in good time. If using aquafaba, just use the same amount.

Another thing, if you want to up the foam even more for whatever reason, you can shake with ice first and without after. Super foamy. This method has gained a lot of traction lately in bars.

I also wanted to add that I like your use of tablespoons. Makes the recipes feel significantly more approachable. While I have plenty of jiggers, most people I know do not.

Those are some great tips! I will have to add a note in the recipe card, thank you. :) Yes, I think tablespoons can relate to most people, so it's a quick and easy recipe. Thank you again!

This drink looks sooo perfect but I have to admit, I don’t like whiskey. Eek! Haha! But maybe I can make this a tequila sour hmmm or a vodka sour?! Maybe the vodka one would be a bit bizarre haha!

Seems like whiskey is a hard drink to consume for many! I'm not really a fan of any drink that is very alcoholic in taste, and the sour disguises it pretty well. However, I do believe you can change to tequila or vodka. Not sure why vodka would be bizarre, but now I really want to try it haha!

I know my husband would love this drink!

this is one of very few hard liquor drinks I ever have - Never made it myself only ordered it at bars - never new there was egg in it!!

Yees, me too! That's good though, right, that you didn't even know it was there? Proof you cannot taste it!

I love a good classic cocktail